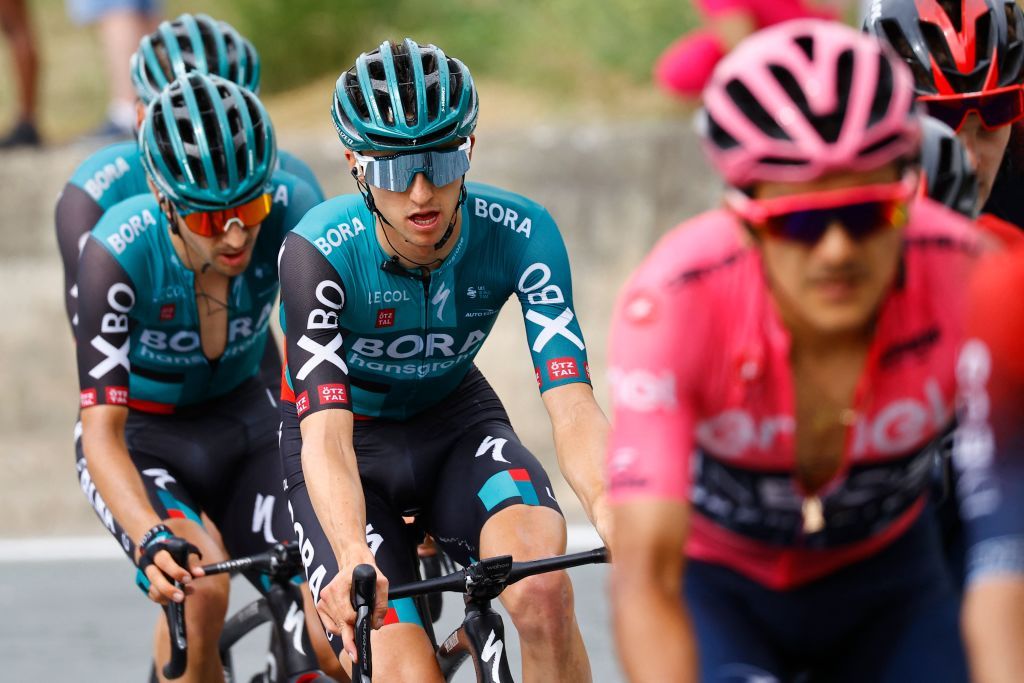 Jai Hindley swapped happy first pumps with his Bora-Hansgrohe teammates after stage 15 of the Giro d’Italia, happy to have survived the Alpine mountain stage to Cogne so he could head into Monday’s rest day perfectly poised in second place, just seven seconds down on Richard Carapaz (Ineos Grenadiers).

On Saturday Bora-Hansgrohe had ripped the overall contender group to shreds on the double assault of the steep Superga and Colle della Maddalena climbs. The work by Lennard Kämna, Wilco Kelderman, Emanuel Buchmann set-up Hindley, who then finished with Carapaz and Vincenzo Nibali (Astana Qazaqstan). Everyone else lost time, while Bora-Hansgrohe confirmed they are in the game and perhaps equally as strong as Ineos Grenadiers.

On Sunday Bora-Hansgrohe, like all the overall contenders, took a more conservative approach to the stage. Kämna went in the break in search of a second success but Hindley, Kelderman and Buchmann stayed on the wheels and kept their power dry for the third week of the Giro d’Italia.

“I think there were a lot of tired bodies out there. I was getting the vibe that everyone just wanted to come home and get the day done and head into the rest day,” Hindley said beyond the finish line as he and his teammates dressed for the 22 km descent to their team buses and then the three hour transfer to Salò for the rest day.

The overall contender group rolled in 7:48 behind the day’s winner Giulio Ciccone (Trek-Segafredo) with only the late sprint to the line – in the hope of a gap opening – lifting their heart rate and power.

“I guess it was pretty boring to watch but what can you do, Grand Tour racing is all about the long game,” said Hindley. “It was a hard day yesterday, and it wasn’t too hard today. I think everyone was a bit cautious.”

“I think if the final climb was much harder, then it would have been a different scenario but with a flatter gradient like that, it’s really hard to do something in the final. I think everyone was like, let’s call it a day.”

As teams analyse the overall classification on the rest day after 15 days of often intense racing, they will see it is finally poised across the top eight.

As Italian journalist Andrea Schiavon pointed out in the Cogne press room, in 2016, when Nibali went on to win the Giro d’Italia for a second time, he was fourth and 4:43 down after stage 16. This year’s Corsa Rosa is far more finely balanced and could remain so all the way to the final time trial in Verona next Sunday.

Like in 2020, where Hindley lost the maglia rosa to Tao Geoghegan Hart, the Perth-born Australian looks set to be fighting for victory all the way to the last kilometre of the race.