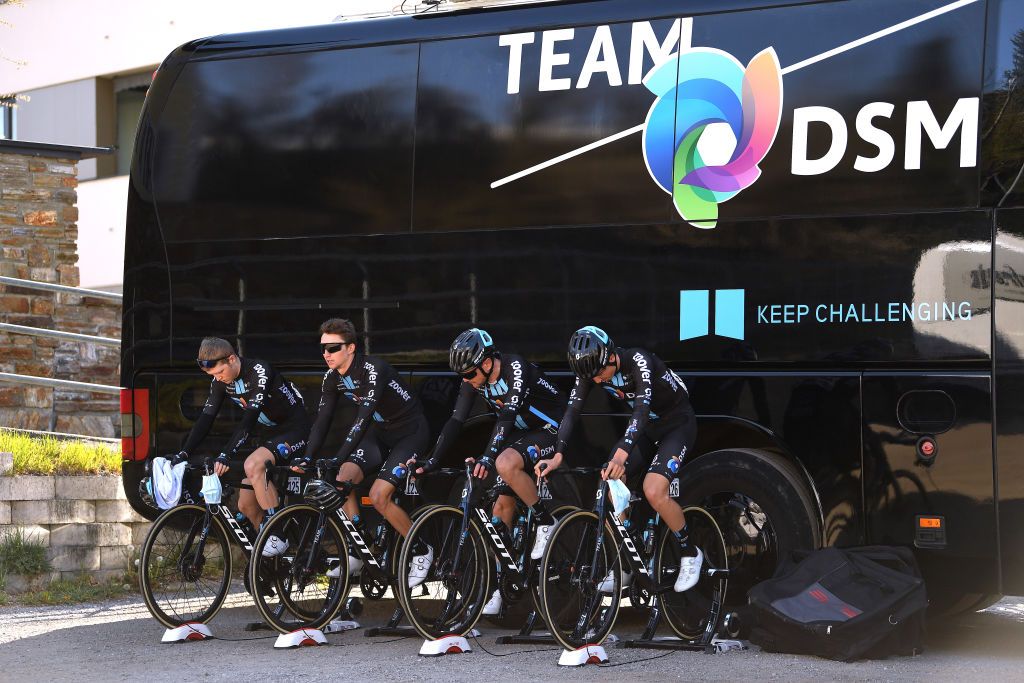 Climbing was the main focus on the penultimate day of racing at the Tour of the Alps at the start in Naturns, Italy, but it was on the final descent into Pieve di Bono where the race was won, and lost. For Jai Hindley of Team DSM, any chance for him to make a dent in a 1:27 deficit to GC leader Simon Yates (Team BikeExchange) was dashed when he crashed just five kilometres from the finish.

On the narrow and twisting descent off the final climb of the second-category Boniprati, GC contender Dan Martin (Israel Start-Up Nation) was the first to go down, unable to slow down in a tight corner. Next, Hindley would hit the pavement. Both riders were able to remount and finish the race, but suffered huge losses.

“Jai suffered abrasions and required stitches after the finish. The team will monitor the situation overnight,” Team DSM said in a statement after the conclusion of the stage.

Hindley, who started the day as Team DSM’s top rider, in seventh position, would cross the line in 18th and drop to 11th on GC, 3:50 behind Yates. However, teammate Romain Bardet moved into the top 10, 3:12 back.

“I think it was a pretty hard stage and there was a lot of action from the beginning. We were there with three kilometres to go in the front group, where the race exploded a bit and we were unlucky with Jai’s crash,” said Bardet in a team statement.

Stage 4 was the longest stage of the race, at 168 kilometres, and also featured the most climbing, 3,880 metres. It was on the descent of the final climb where only a select few riders from a group of 16 seemed to remain for a final assault for stage glory and GC time. Hindley was with Jefferson Cepeda (Androni Gioocattoli-Sidermec) and Hugh Carthy (EF Education-Nippo) on the descent, chasing Martin, Nairo Quintana (Arkéa-Samsic) and Pello Bilbao (Bahrain Victorious) who were trying to catch Aleksandr Vlasov (Astana-Premier Tech) and Yates, who had crested the climb first.

Bilbao would put on the after-burners on the descent to catch the leading duo and then sprint to the stage win, leaving Vlasov in second and Yates third at the finish. Like Hindley, Martin lost significant time with his crash, almost three minutes, and dropped from a tie for third to 14th overall.

For Team DSM, the good news is that Hindley could finish and that Bardet gave them a rider in the top 10 for the finale on Friday.

“The guys rode a good stage, with Nico [Nicolas Roche] in the break and then showing good teamwork to bring Jai and Romain into position for the final climb. Over the top Jai was racing for a good result on the descent but unfortunately he crashed at five kilometres to go. He got back on the bike but lost time running into the finish. Romain was able to round out a solid top ten on the stage for the team though.”

The team will provide an update by Friday morning on the condition of Hindley and if he will take the start on stage 5 for 120 kilometres from from the Valle delle Chiese to Riva del Garda.

The runner-up at the 2020 Giro d’Italia, Hindley was recently named as part of Team DSM’s squad at the Italian Grand Tour for this year, starting May 8.