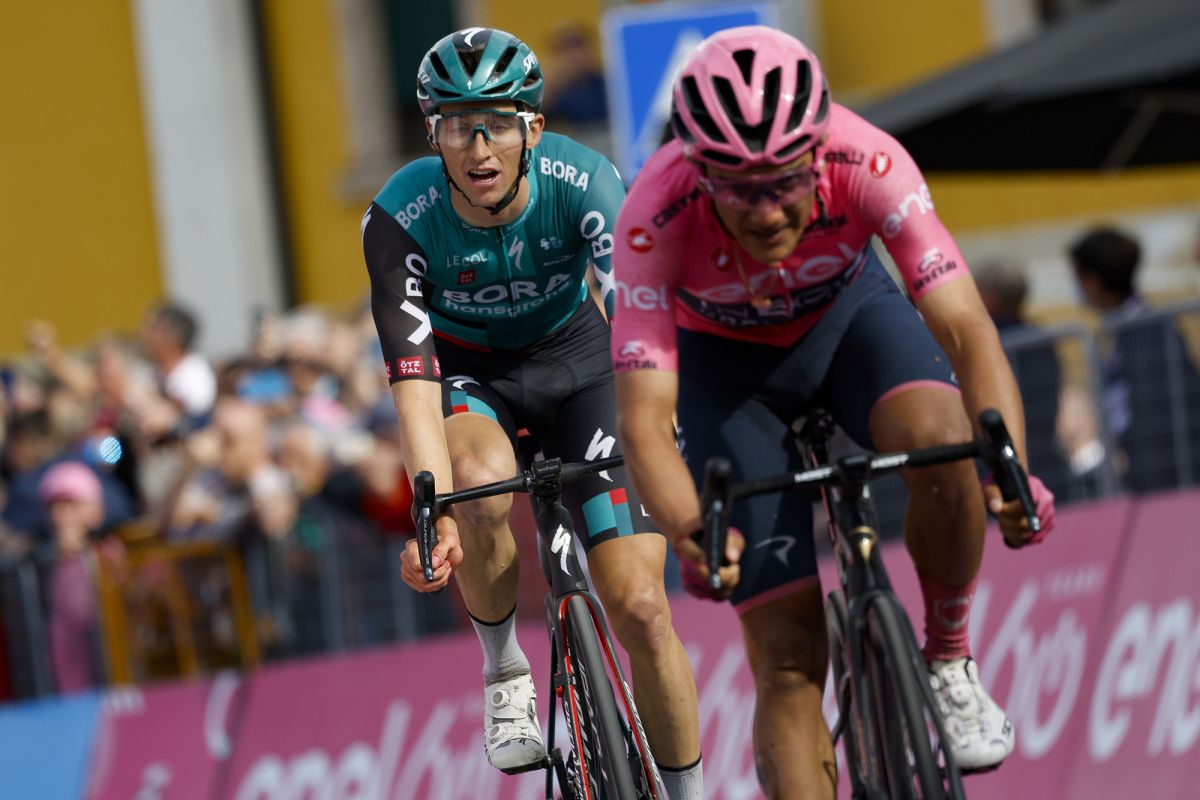 Jai Hindley’s stalemate with maglia rosa Richard Carapaz at the top of the Giro d’Italia GC might have stretched out for another stage on Wednesday, but the race’s war of mountain attrition has nonetheless seen the two top contenders take another step clear of their mutual rivals.

Yet following several munches of energy-reviving Haribo sweets and getting his breath back before talking to a small knot of reporters including Cycling News’ Stephen Farrand, Hindley reflected that the day’s takings at the Giro d’Italia had not been so bad for him, after all.

Rather than João Almeida (UAE Team Emirates) in third place at 44 seconds, for one thing, the Portuguese racer’s slowly-deflating GC effort has seen the longstanding 2020 Giro leader replaced by Mikel Landa (Bahrain Victorious) on the provisional podium at 1:05.

Still, Hindley continued to present the biggest challenge to Carapaz, and after Aprica saw him snatch back four seconds on the maglia rosa courtesy of a third place time bonus, he emerged the narrowest of winners from the opening Dolomite duo of mountain stages, but the winner nonetheless. So if he’s not in pink, with four days remaining, he could hardly be closer.

It’s been a similar story for the man in fifth overall, double-Giro winner Vincenzo Nibali (Astana Qazaqstan), whose time loss on Carapaz had swelled from 3:40 to 5:48. Carapaz may be impossible to budge, then, and Hindley showed no sign of wanting to do more than stay in contact with the Ecuadorian on Tuesday. But with just four stages to go, the downside of the GC coin is shining a lot more brightly for Hindley than it was 24 hours previously.

“It’s pretty hard when it’s not a hilltop finish. I don’t think it was the most decisive stage but I’m happy to take time on some of the other guys,” Hindley said.

“Everyone says Giro will be decided by minutes, but it’s not like that any more. Every second counts.”

With that in mind, and as the Giro takes a break from the mountains and overall battle Thursday before the three final stages in north-east Italy, Hindley recognised that his opportunities to crack the GC further open are swiftly evaporating. In terms of his strongest suit, climbing, he pinpointed the tappone on Saturday over the Pordoi and finishing atop the Fedaia as his best option to make his biggest dent in the opposition.

That said, and when looking back at stage 17, Hindley argued that there was not much more to be done given the evenly matched state of affairs between himself, Carapaz and Landa, particularly after Monday’s slog to Aprica via a climb as tough as the Mortirolo.

“I think there was a lot of tired legs out there after yesterday’s epic stage,” he reflected. “So I was also pretty tired to be honest. It was a hard climb and ridden at a hard tempo, and what can you do, like? I think the level between Carapaz and Landa is also pretty even, so it was a pretty tough final.”

Still, Hindley continues to present the biggest challenge to Carapaz and after Aprica saw him snatch back four seconds on the maglia rosa courtesy of a third place time bonus, he emerges the narrowest of winners from the opening Dolomite duo of mountain stages, but the winner nonetheless.  So if he’s not in pink, with four days remaining he could hardly be closer.