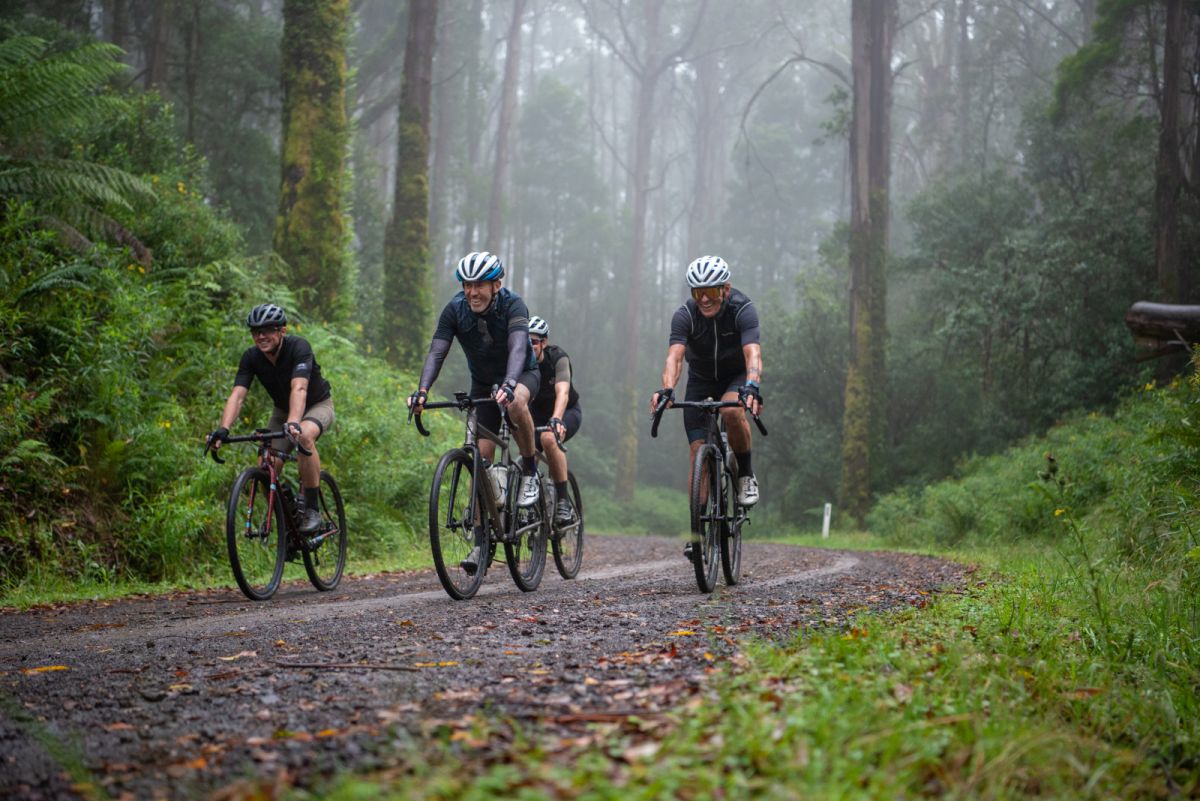 One of the first rounds of the new UCI Gravel World Series was held in Australia this year, shining a light on a corner of the world not traditionally associated with gravel racing, but as important a step as it was in the nation’s gravel racing journey it was far from the first.

Australia may not have Europe’s more than a century of cyclo-cross inspired affinity for riding skinny-tyred bikes on rough surfaces or the growth of L’Eroica to remind us that it was pretty much all gravel racing once or high profile events that are found in the United States like Unbound. It does, however, have plenty of the crucial ingredients.

Gold was how the race director of Australia’s first round of the Gravel World Series, Stephen Gallagher, described the roads he saw when he was first taken to the Western Australian region of Nannup to explore the possibility of a gravel race. Even before that gravel riding was sinking deep into the consciousness of a community looking for a new adventure on the bike and those pockets of gravel that were generously sprinkled around the nation meant race organisers couldn’t help but see the sparkle of potential in racing on those unevenly surfaced roads – in some cases perhaps even when the riders couldn’t.

More than a decade before the first Gravel World Series race came to Western Australia, across the other side of the nation in Victoria, Rohin Adams was organising mountain bike marathon events using the gravel roads tucked into the forests fringing Melbourne to connect sections of single track. Those gravel road sections, were in fact drawing complaints from racers who wanted more of the hard to find single-track instead, but Adams decided to respond by heading in completely the opposite direction. As a result, he created one of the early mass participation gravel events in Australia almost, as he describes it, almost by accident.

“I’d been racing in Europe where I’d done marathons that had no single track and found them really great as I had these amazing bunch riding experiences in mass participation mountain bike marathons so I just kind of went, well, people keep complaining about not enough single track but I’m going to give them an event with no single track at all,” the Big Hill race director told Cycling News. “That’s where Dirty Gran Fondo came from.”

Less is definitely sometimes more. The race which was set up as a bit of a competition between mountain bikes and gravel bikes was first run in Wandong in 2012, with three distances – 30km, 65km and 90km – all lining up together to take on a hilly course where all rode the same start and finish but those doing the longer distances just branched out rather than looped back toward the start at each of the two feed stations.

The shared experience, quirky signs to distract from the screaming legs on the climbs, live music and a coffee machine at the feed zone in the middle of the Mt Disappointment State Forest proved a winning combination.

There were 165 riders at the first edition most on mountain bikes and with 48 on cyclo-cross bikes, which still weren’t overly common in Australia at that point as gravel as a segment was yet to explode and cyclo-cross was in its early days. Some raced, others were just happy to finish, but that was the start of an event which for a number of years stood out on a calendar as a place where road and mountain bike riders met in the middle ground of gravel.

“I had the scene for about three years and we sort of doubled our numbers each year,” said Adams. “And then other events started cropping up.”

Adams’ Big Hill Events, which was running a gravel event out at Gembrook as well, ran its last Dirty Gran Fondo in 2017 while another of the races which had also been a long-standing race on a gravel road also ran its last edition the next year, the Mitta to Mt Beauty.

That was a 55km race from one the small Victorian Alpine hamlet of Mitta Mitta, to the small town of Mount Beauty, separated by a gut busting gravel climb delivering views across the mountains toward the state’s highest peak, Mt Bogong and with October weather that some years left riders hoping it wouldn’t snow and others made the icy mountain stream at the bottom of the descent look almost inviting. It had been running since 1992 with riders mostly on mountain bikes. It hadn’t, however, captured great numbers of gravel bike entrants of the likes of the Dirty  Gran Fondo as with the long rough descent the suspension and wider tyres came in handy, so mountain bikes were still the steed of choice.

These two events had once been filling a gap with a style of racing that was rarely found elsewhere, but that was now all changing and while these events disappeared many more were emerging to take their place as the once rare sight of a gravel bike became increasingly common.

‘It doesn’t have to be a smash fest’

New events were cropping up across the country, but the tone remained familiar – gravel may be challenging but that doesn’t mean it isn’t also fun.

Among those new events was Western Australia’s Seven, which this year, in its fifth edition, became the first Australian round of the Gravel World Championships.

“The event came at the sweet spot when gravel was starting to get popular,” said Gallagher, a former professional racer and, among other things, a director at Dig Deep coaching and a performance coach with Canyon-SRAM who is also involved in the Zwift Academy.

“We started to see the inclusion, first of all, in races like the Tour de France and Giro d’Italia of the odd gravel segment, and obviously the United States has a big momentum in gravel. Gravel itself was becoming part of the mainstream, I think because a lot of people were trying to get off the roads.”

As such the event saw steady growth, even through the state border closure of the pandemic, and more than a thousand lined up this year to take on the climbs of the course as it wound its way out and back to Nannup through the Blackwood Valley.

The first Australian Gravel Championship was also run in 2018 in Victoria, run alongside the popular mass-participation ride, Amy’s Gran Fondo.

However, while there were undoubtedly riders participating in gravel that wanted to try and push their name as high up the results sheet as possible and events catering for that, gravel as a discipline felt more social and oriented toward having an adventure with friends than road or even mountain bike racing. As a result events were often oriented toward participation and challenge, rather than being purely – or at all – about racing. Plus, rather than skewing toward the long distances seen at some US events, the longest distance options still often tended to be under 100km.

One example is the Great Otway Gravel Grind, which was added to the mix in 2017, running the day after the popular Otway Odyssey MTB Marathon, with a 97km and 47km event.

“It doesn’t have to be a smash fest and it doesn’t have to be open only to elites,” Sam Maffett, general manager of event organiser Rapid Ascent told Cycling News on the sidelines of the 2022 event. “We wanted to provide the framework for elite riders to have a fast, well-organised race over a fair course where the best rider wins, but also deliver a format where newcomers can feel just as welcome and just as thrilled to line up side by side with the same riders and do it at their own pace. With a 200 mile event you’re ruling out 80% of the field to start with.”

The feed zones at the event are excluded from the timing, so even if results are the aim a coffee and cake stop to catch up with mates mid-event isn’t out of the question.

“Cycling for me should be about participation, getting people out in the great outdoors, challenging themselves in their own way,” said Maffett.

The COVID-19 pandemic presented a challenge for event organisers through many pockets of the nation in 2020 and 2021, as they were grappling with lockdowns and last minute event cancellations due to the COVID-19 pandemic, but as the opening up continued through 2022 it seemed that the range of gravel events broadened almost overnight.

The number of participation focussed events grew, with many organisers adding gravel. Adams and his event group Big Hill Events was among those shifting back into that space again, making another foray into gravel with events from the Beechworth Granite Classic and Dirty Yack to the planned two-day Mitta Valley Gravel Unravel, which is based in the town which was once the start point of the long-running Mitta to Mt Beauty.

The range of events is also broadening, with local clubs running gravel races, and  competition ramping up on a national and even international level. Not only had Seven in Nannup joined the new UCI Gravel World Series in May, but a new event on the calendar, Gravelista in Beechworth, would also add a second Australian round in September. On top of that the Australian Gravel Championships, which had been on ice for two years, were put on the calendar for July in 2022 at the the Noosa Gravel Enduro.

“I think we’re on the precipice of gravel racing becoming more of a go to,” said Adams, who has been closely involved in the evolution of the gravel racing scene throughout the years. He added that part of the reason for that was the traffic management issues of organising road events had become increasingly difficult and costly.

“The club scene starting to hold gravel events, as I’m seeing it that is going to bring gravel more to the mainstream and cement it as a stable part of the season,” said Adams. “I think it’s on the verge of filling out and all of the different options of gravel becoming a thing.”

The obvious gap in the gravel options in Australia has been the long events, in the vein of Unbound with its signature 200 miles (321km).

However, this year Australia’s oldest road race, the Melbourne to Warrnambool, is adding a gravel event – the Dirty Warrny – which in November will take riders over 246km with 3,246m of climbing.

“There is nothing of this length in this style of racing here and it is so sought after in the US,” Event Director Karin Jones told Cycling News.

“There are other shorter races, which is great fun, they’ve got a place for sure, but there are riders that certainly want the challenge. It’s something that you can set your goals and targets for.”

The new event also not only provides a link to the familiar and past, when much of the road racing was by necessity gravel racing, but also fills a void in the new era of gravel racing which could help that sweet spot for the discipline grow even larger.