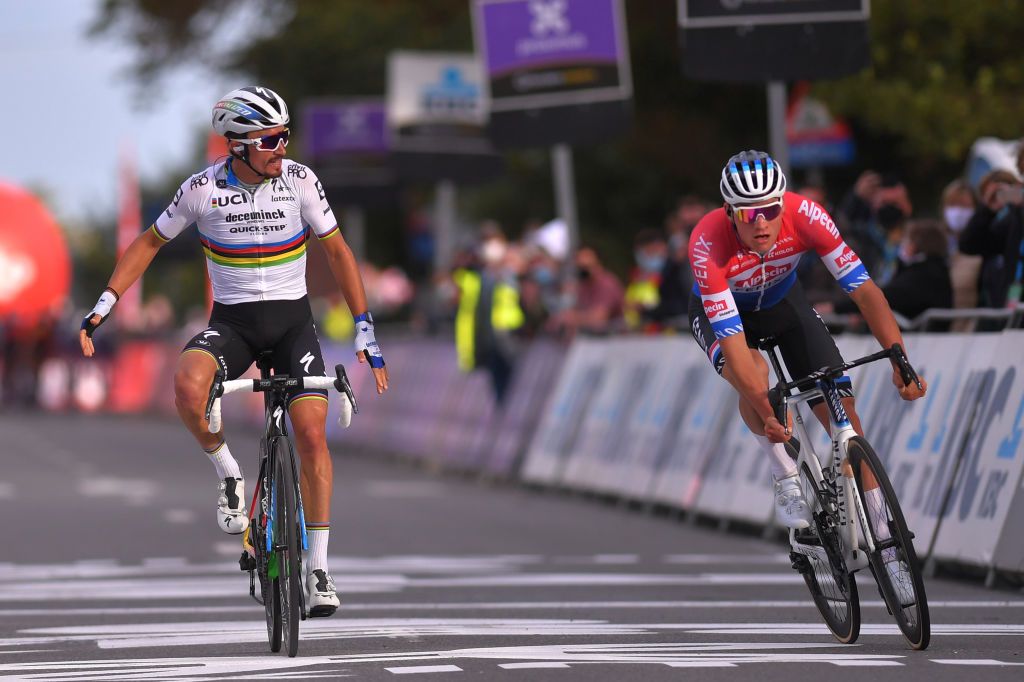 The Brabantse Pijl – also known as La Flèche Babançonne – is, like Scheldeprijs, a mid-week race that serves as a bridge between bigger events and major spring Classics.

Whereas Scheldeprijs sits between the Tour of Flanders and Paris-Roubaix, Brabantse Pijl – or Brabant Arrow – is a physical and temporal pointer between the cobbled Classics and the Ardennes Classics.

In 2020, the race’s arrows flowed in the opposite direction as the COVID-19 pandemic forced a massive reschedule and Brabantse Pijl sat between Liège-Bastogne-Liège and Gent-Wevelgem.

The race provided then new world champion Julian Alaphilippe (Deceuninck-Quickstep) his first victory in the rainbow jersey after he celebrated too early in Liège, lost the sprint to Primoz Roglic and then was relegated for irregular sprinting.

Alaphilippe escaped in a three-man group with Mathieu van der Poel (Alpecin-Fenix) and Benoit Cosnefroy (AG2R La Mondiale) and boxed the Dutchman in behind Cosnefroy in the sprint to take the victory in Overijse.

Like Scheldeprijs, the Pro Series men’s race is paired with a UCI 1.1-ranked women’s event, which was won last year by Grace Brown.

This season, the race will also provide a preview of part of the UCI Road World Championships road race course but neither Alaphilippe nor Brown will not be present.

The BikeExchange team will be arriving without Brown, who soloed to victory last season in Overijse, after the Australian’s busy early season that included a victory in the Classic Brugge-De Panne.

With Paris-Roubaix postponed, the Brabantse Pijl will be a last chance for the cobbled Classics specialists to get in a few digs before taking a break and it will be a good warm-up for the Ardennes with no fewer than 27 climbs scattered across 201.7km on the roads east of Brussels.

Wout van Aert (Jumbo-Visma) will make his debut in the race, having added it and the Amstel Gold Race to his calendar after Paris-Roubaix was postponed.

The women will race 127.3km and rather than start in Leuven, go past Overijse to Beersel and double back for the closing laps like the men, they will instead start in Lennik and head straight to the Walloon Brabant climbs for an early shake-out and then cover the flatter roads to Overijse where they’ll tackle the same lumpy closing circuit.

The Schavei, which has made the race in past years, is out with the newly resurfaced Moskestraat which pitches up to 15 per cent gradients, the main selector with around 11km to go.

All eyes will be on Van Vleuten and Van den Broek-Blaak, but watch out for punchy climbers like Liane Lippert (Team DSM), Ashleigh Moolman-Pasio (SD Worx) and Lauren Stephens (TIBCO-Silicon Valley Bank) to be in the mix.

Read on for all the information on how to watch the Brabantse Pijl 2021.

The men’s Brabantse Pijl will be broadcast around Europe on Eurosport with the women exclusively via livestream online. A subscription to Eurosport Player costs £6.99 for a single month, £4.99 for a year-long monthly pass, or £39.99 for a 12-month pass.

Flobikes will air the races in Australia, Canada and the USA, with plans starting from $12.50 per month or $150 per year.

In Belgium, Sporza, Eén and RTBF will air the races. The women’s race will be livestreamed courtesy Proximus worldwide.

If you live outside a broadcast zone or are on holiday outside your country and find that the live streams to be geo-restricted, you can get around this by getting access to them by simulating being back in your home country via a ‘virtual private network’, or VPN, for your laptop, tablet or mobile.

Our sister site TechRadar tested hundreds of VPNs and recommends the number-one VPN currently available as Express VPN. With , you can watch on many devices at once including Smart TVs, Fire TV Stick, PC, Mac, iPhone, Android phone, iPads, tablets, etc.