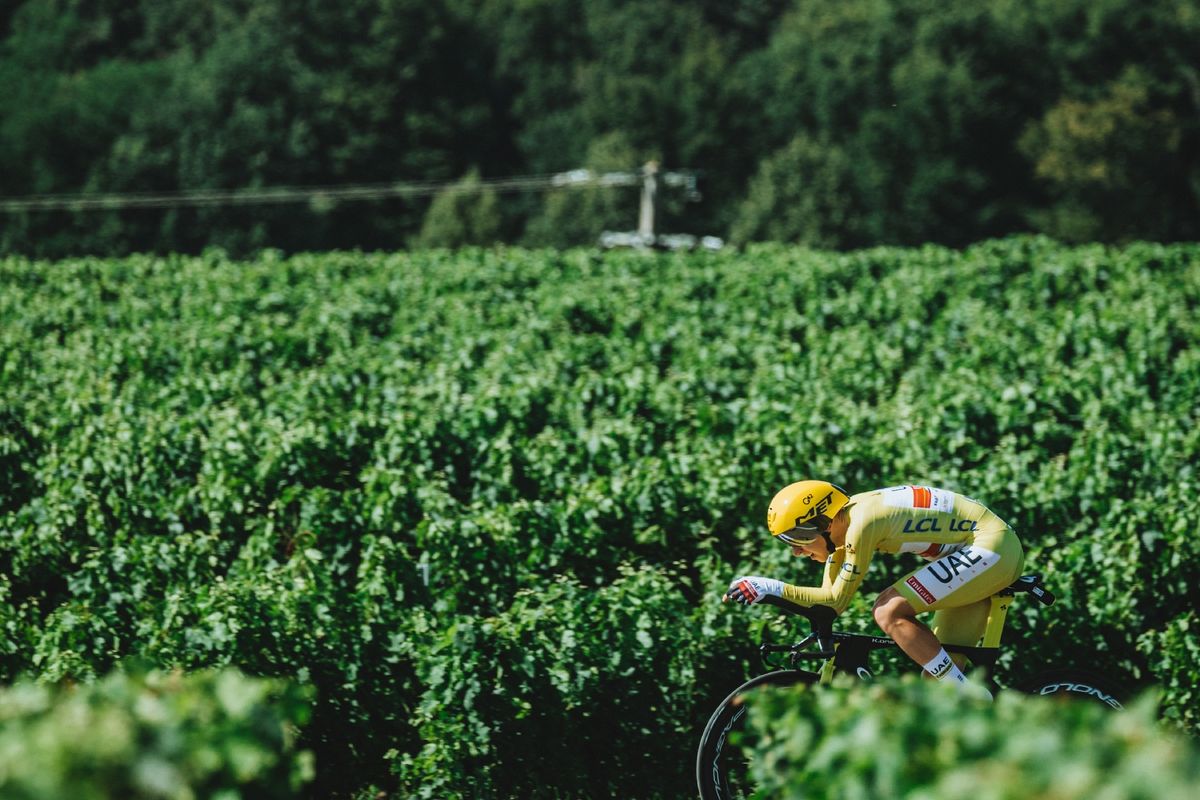 Tadej Pogačar has had quite the year. In July he won his second consecutive Tour de France, and in September he announced his engagement to his girlfriend, Urška Žigart. Either side of the big one, he picked up two of cycling’s Monuments.

Nothing seems to faze the 22-year-old phenomenon, who grew into something of a ‘patron’ during the three weeks of the Tour. Over 21 stages, there was just one brief moment when he was put under pressure. But other than that, it was perfection.

I was quite relaxed coming into the Tour. I knew I had prepared well and have a good group of people around me and we all work really hard for each other. My target was to win the race again. I think that was a fair target after winning last year, though I knew it would be hard to achieve.

Before the Tour I was in Slovenia, where I had the time trial and road race National Championship, so it was a nice reason to go home and see the family. But also to put the final touches to my Tour prep. I love racing in Slovenia and representing the national team when I get the opportunity. It’s really important for me and something I’m really proud of.

Allan Peiper has had a few health issues lately and so has been at fewer races than usual. He and I have a very good relationship. He was my directeur sportif at my first race for the team back in 2019 and also when I won the Tour last year. He has a lot of experience and his attention to detail and planning is something that really makes a big difference. He is a really good guy who I admire a lot.

The first few days at this year’s Tour were really intense with all the crashes. We had our fair share of bad luck, with all of us touching the ground at some point, Hirschi and McNulty coming worst off in the crashes. We all look to beat our rivals but I can say that no rider wants to see other guys crash or hurt themselves. So when I heard Primož had crashed I was disappointed for him. At the end of the day, it’s just sport and we all have families and loved ones who are more important.

I was delighted to win the time trial. I knew I had gone fast but there were a lot of specialists there so I didn’t know exactly how I had done. When I found out I had won, it was a great feeling after such an intense first week. I also managed to take the white jersey that day, which was really nice as it’s still an important one to wear and I have good memories in white jerseys.

We had spent a lot of time doing the recon of the stages in the Alps and knew what to expect pretty well. On the day we did the recon to Tignes the road was covered in snow and we had to walk across it in our cleats, carrying our bikes, to see the last part of the climb. The directeur sportif had to do a detour of over two hours to get around and collect us at the other side. On the actual day of the stage the weather was wet and cold, which was good for me as I know that it can suit me well.

On stage 11, on Ventoux, I went really deep. I couldn’t follow Vingegaard so I let his wheel go. I knew we weren’t so far from the top so it was a matter of getting into a good rhythm and limiting my losses.

Then, when I saw Urán and Carapaz coming across, I knew we would have a good chance of catching Vingegaard on the descent because it was still far from the finish. We hit over 100kmph on that descent; it was one of the fastest speeds I’ve ever done on a bike.

The final time trial was a different sensation. In 2020 it was a feeling of shock and excitement because of the circumstances on the last time trial. But in 2021 I had a pretty healthy gap coming into the time trial, so it was a little bit more calm but also hugely emotional. Both feelings were great and I feel lucky to have had both experiences.

My girlfriend is a huge support for me also and she is usually the first person I call after the race. This year I also had my parents following a lot of the race in a campervan with my little sister, and my other two siblings also joined them for a few days. Obviously with the race bubble, I wasn’t able to see much of them but once or twice I was able to go over and say hello from afar. It was nice having them there and it gives you an extra boost.

Standing on the podium in Paris is really beautiful. Speeches are not my strongest point. I  always think that, no matter how much you prepare it, you always forget to thank somebody, but I did my best to speak from the heart.

One word is not probably not enough to describe how I feel about my Tour victory, but it was  really perfect.

SOURCE: CyclingNews   (go to source)
AUTHOR: Tadej Pogacar
All copyrights for this article, including images, are reserved to the original source and/or creator(s).