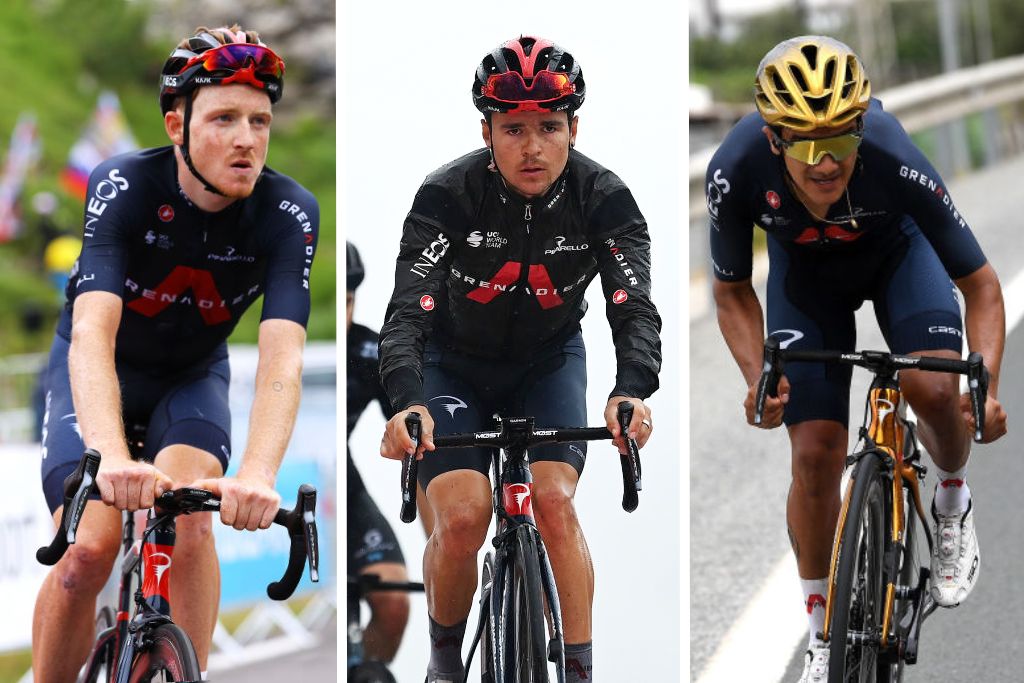 Ineos Grenadiers’ Grand Tour plans for 2022 are to be confirmed in the new year but are already taking shape, with almost a full team pencilled in for the Giro d’Italia.

In an interview with Italian magazine Bici Pro, sport director Matteo Tosatto indicated that Richard Carapaz, Tom Pidcock, Tao Geoghegan Hart, Elia Viviani, and Ben Swift will be racing in Italy in May.

They are set to join Richie Porte, who has already outlined his own intention to race the Giro – scene of his Grand Tour debut – in the final year of his career.

It had been expected that Carapaz would target the Giro, with Egan Bernal – who won the race this year – indicating his preference to return to the Tour de France and then try and complete his Grand Tour set at the Vuelta a España.

Carapaz won the Giro in 2019 with Movistar and has since finished on the podium of the Tour and Vuelta in Ineos colours, establishing himself as one of their key Grand Tour leaders

“We will put together a great team to win the Giro,” Tosatto told Bici Pro. It is not a mystery, I think that our leader will be Carapaz.”

Tosatto also revealed that Pidcock should be on the start list. The British youngster had a sensational debut season in 2021, winning Brabantse Pijl as well as riding his first Grand Tour at the Vuelta, while also claiming the Olympic mountain bike title.

“Tom went to the Vuelta last year and now he wants to try the Giro, but meanwhile he is doing cyclo-cross and has the Classics already in mind,” Tosatto said. “But he likes Italian racing and this is a beautiful thing for us.”

Tosatto went on to indicate that Tao Geoghegan Hart, who won the late-season Giro in 2020, would return to Italy after a difficult Tour de France debut in a difficult 2021 season.

The other name was that of Elia Viviani, subject of much of the interview. The Italian sprinter will return to Ineos Grenadiers after four years away and is likely to slot back in at his home Grand Tour. Ineos haven’t taken a pure sprinter to a Grand Tour since Viviani did the Giro in 2016, which was partly the reason for his departure, but they are set to offer up a slot in 2022.

“His goal, and ours too, is to be in the Giro d ‘Italia,” Tosatto said. “Then let’s see how the first months will go. Elia proved that in a great Giro he knows how to win and help. I remember the year he won the stage of the Tour and then worked for Alaphilippe [2019 -ed]. And in the Giro he knows the areas and can also help the leader.”

In terms of a possible lead-out, Tosatto mentioned that Swift “is on the list” for the Giro and referenced their experience riding together between 2015 and 2017.

With Carapaz, Pidcock, Porte, Geoghegan Hart, Viviani, and Swift on the team sheet, there would only be two spaces left to fill. Salvatore Puccio has ridden eight of the past nine editions of the Giro for the team and, after recently extending his contract, could be expected to act as road captain once again, although Ineos have plenty of mountain domestiques to call upon.

Filippo Ganna has won three stages at each of the past two editions of the Giro but has been linked with a possible Tour de France debut, with the yellow jersey within reach on the opening time trial in Copenhagen.

Bernal, Geraint Thomas, Adam Yates, and Pavel Sivakov are Ineos Grenadiers’ other Grand Tour leadership candidates, who are likely to divide responsibilities at the Giro and Tour.