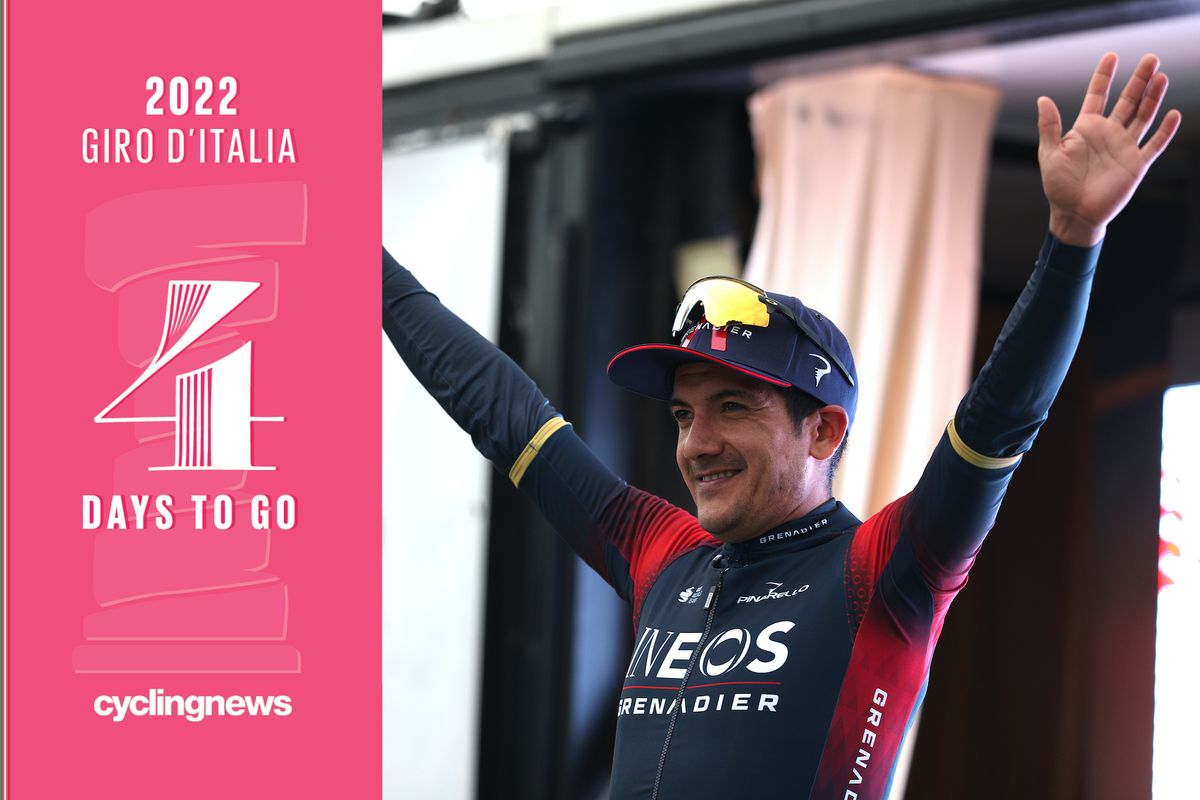 Ineos Grenadiers will travel to Budapest for the Giro d’Italia Grande Partenza on Tuesday, ready, willing and confident about targeting the maglia rosa with Richard Carapaz.

The Ecuadorian climber and his British super team face a three-week battle with a number of other WorldTour teams but start the Corsa Rosa wearing number one and, after the victories of Tao Geoghegan Hart in 2020 and Egan Bernal in 2021, are the logical favourites.

“We’re not gong to hide our ambitions: Richard is aiming to win the Giro d’Italia. He’s won it once before in 2019 and wants another. So do we all,” Ineos Grenadiers Italian directeur sportif Matteo Tosatto tells Cycling News, not afraid to show his Italian pride and the self-confidence of Ineos Grenadiers.

“We know we’re one of the teams that will decide, influence and control the race. We won the maglia rosa in 2021 with Egan, in 2020 with Tao, in 2018 we won with Chris Froome and even in 2019 we had a group of young riders but Pavel Sivakov was ninth.”

Ineos Grenadeirs named their eight-rider roster on Friday, confirming their strategy to go all-in with Carapaz.

There was no place for sprinter Elia Viviani, nor a recently sick Geoghegan Hart. After a successful but long and illness-hit spring campaign, Tom Pidcock will also sit out the Giro and will instead target a place at the Tour de France alongside team leaders Dani Martínez and Adam Yates.

In the absence of Egan Bernal, and with Tadej Pogačar and Primož Roglič the big favourites for the Tour, Ineos Grenadiers have clearly decided to hedge their bets and target victory at the Giro yet again. The unpredictability of this year’s Tour route means it could prove a wise investment of their currently transitional Grand Tour resources.

Tosatto shrugs off any doubts about the Ineos Grenadiers squad for the Giro d’Italia. The line-up mixes talent, youth and experience, with Carapaz supported in the mountains by Pavel Sivakov, Jonathan Castroviejo and Richie Porte, who will end his Grand Tour career in Italy.

Salvatore Puccio is the trusted road captain, while Jhonatan Narváez and Ben Swift offer support and protection on the flatter roads and in breakaways. In the absence of Geoghegan Hart, 20-year-old Ben Tulett makes his Grand Tour debut after winning a hilly stage at the Settimana Internazionale Coppi e Bartali and finishing a recent fourth in the best young rider competition at the Itzulia Basque Country. It will be fascinating to see how Tulett and Sivakov perform while riding for Carapaz and both offer some kind of alternative if he falters or crashes.

“To win the Giro we need everyone in the team, from the rider who leads the chase in the opening kilometres, those who ride on the flat, in the crosswinds and in the hectic sprint finishes, to the last man on the big mountain stages,” Tosatto insists.

“It was a difficult decision to make because Elia obviously wanted to ride the Giro but our priority is to win the GC. We couldn’t risk Elia going for a sprint one day and then not having the strength to play a team role the day after,” Tosatto explained to La Gazzetta dello Sport.

The vital roles of Carapaz, Sivakov and Porte

Many riders in the final selection showed their form at the recent Tour of the Alps in Italy and Austria, while Carapaz only travelled to Europe last week after competing a block of altitude training at home in Ecuador. His last race was the Volta Ciclista a Catalunya in late March, when he attacked with Sergio Higuita to win stage 6 and as a result secured second overall behind the Colombian.

Carapaz’s 2019 Giro d’Italia changed his career and his life as Ecuador celebrated its first-ever Grand Tour winner. His success also lead to his move from Movistar to Ineos Grenadiers, his second palace at the 2020 Vuelta a España, third place at the 2021 Tour de France and a gold medal in the Tokyo Olympic road race last year.

“It started a new era in cycling for Ecuador. It also had an impact on me mentally, as it showed me that I had the ability to be a successful Grand Tour racer,” Carapaz says of his 2019 Giro win.

“Everyone knows Richard is an intelligent, smart thinking rider who works well and trusts his teammates,” Tosatto tells Cycling News, keen to forge team unity before the Corsa Rosa starts in Budapest.

“No one can win a Giro d’Italia on their own, you always need the help of your teammates in the good and bad moments. We’re fortunate to have a team for every situation.”

Sivakov has endured two seasons of Grand Tour suffering but appeared back to his talented best at the Tour of the Alps. He is still only 24 but has ridden five Grand Tours and finished ninth in the 2019 Giro. He crashed on the rain-soaked opening stage of the 2020 Tour de France in Nice but fought on all the way to Paris. He then crashed out the 2021 Giro d’Italia after just five stages, with the rest of the season spent working for his Ineos Grenadiers teammates.

Tosatto expects Sivakov and Porte to help Carapaz in the high mountains and especially in the final week.

Porte turned 37 in January and has already announced he will retire to spend more time with his family, helping his wife raise their young children. The Tasmanian could have avoided the pain and responsibility of riding a final Grand Tour but has worked hard in recent months so he can play a vital role in Italy.

“It’s been great spending half of my life on the other side of the world but all good things come to an end,” Porte tells Cycling News.

“I still love riding my bike but I want to be with my family more after this season. My son will be five next year and so will start school, so I’m ready. It’s become harder and harder to leave the family to go to races and it’s not fair on my wife, who does the lion’s share of parenting.”

Porte raced in Italy as an amateur in 2009 and then in 2010, in his first year at the Giro d’Italia, wore the maglia rosa for two days after joining the decisive breakaway on the long stage to L’Aquila. He went on to finish seventh overall and win the best young rider’s white jersey.

“I did my formative year, my apprenticeship in Italy. Taking the pink jersey in my first Giro and going on to win the best young rider’s jersey are still some of the most incredible memories of my career,” Porte recalls.

“It’d be great to be part of the team that wins the pink jersey, in my last season, with Richard Carapaz.”

Tosatto was impressed with Porte’s consistently strong riding at the Tour of the Alps.

“He’s very relaxed but very determined to do what he can to help Richard in what is very likely the final Grand Tour of his career,” Tosatto tells Cycling News in praise of Porte.

“He wants to do well for the good of the team, not for his own ego or for a farewell Grand Tour. I think it’ll be a special Giro for Richie. It’ll be a final chance for him to show his huge class. For sure we’ll need all his talent and experience if we are to win the Giro.”

Tosatto: It’ll be a thrilling race to watch, to ride and to hopefully to win

Tosatto is now 47 and rode 34 Grand Tours during his own long professional career as a domestique between 1996 and 2015.

From the northern cycling heartland of Castelfranco Veneto, Tosatto feels the emotions of the Giro d’Italia more than some of his riders. He will lead Ineos Grenadiers from team car number 1, with Oliver Cookson the second directeur sportif.

Tosatto was in the team car in 2020 for Geoghegan Hart’s win in 2020 and when Bernal won in 2021. In recent months he has completed detailed reconnaissance of virtually every stage and carefully planned Ineos Grenadiers race strategy. He is ready for an intense May of racing.

“Every edition of the Giro is special for an Italian, especially when you’ve ridden so many like I have. This year the Giro ends in Verona, in my home region of the Veneto, there’s also a stage finish in Treviso near my home and at the home of our bike sponsor Pinarello,” he explains.

“When I was a rider the Giro motivated me that little but more than most other races but I never really got nervous. I learnt to embrace it all and enjoy the Giro. I hope my riders can do the same.”

Tosatto, Carapaz and everyone at Ineos Grenadiers knows there are just 26.6km of time trials in this year’s Corsa Rosa but 51,000m of climbing and some testing mountain stages spread between Sicily in the south and the stage 20 finish on the Marmolada.

“It’s important to start the race in good shape and be focused because there’s a tough mountain finish on Mount Etna on stage 4,” Tosatto warns.

“Then stage 7 to Potenza could be risky and stage 9 on the Blockhaus will reveal people’s real chances. Of course we’ve seen over the years that the Giro is decided in the final week and the mountain stages will reveal the podium contenders before the crowning time trial in Verona.”

A final time trial has decided the winner of the Giro d’Italia five times, the last in Verona, when Carapaz successfully defended the maglia rosa he had taken in Courmayeur by out-foxing and out riding Simon Yates, Nibali and Landa.

“With so few time trial kilometres, this year’s Giro is all about taking seconds whenever you can. It’ll be a thrilling race to watch, to ride and hopefully to win,” Tosatto concludes.