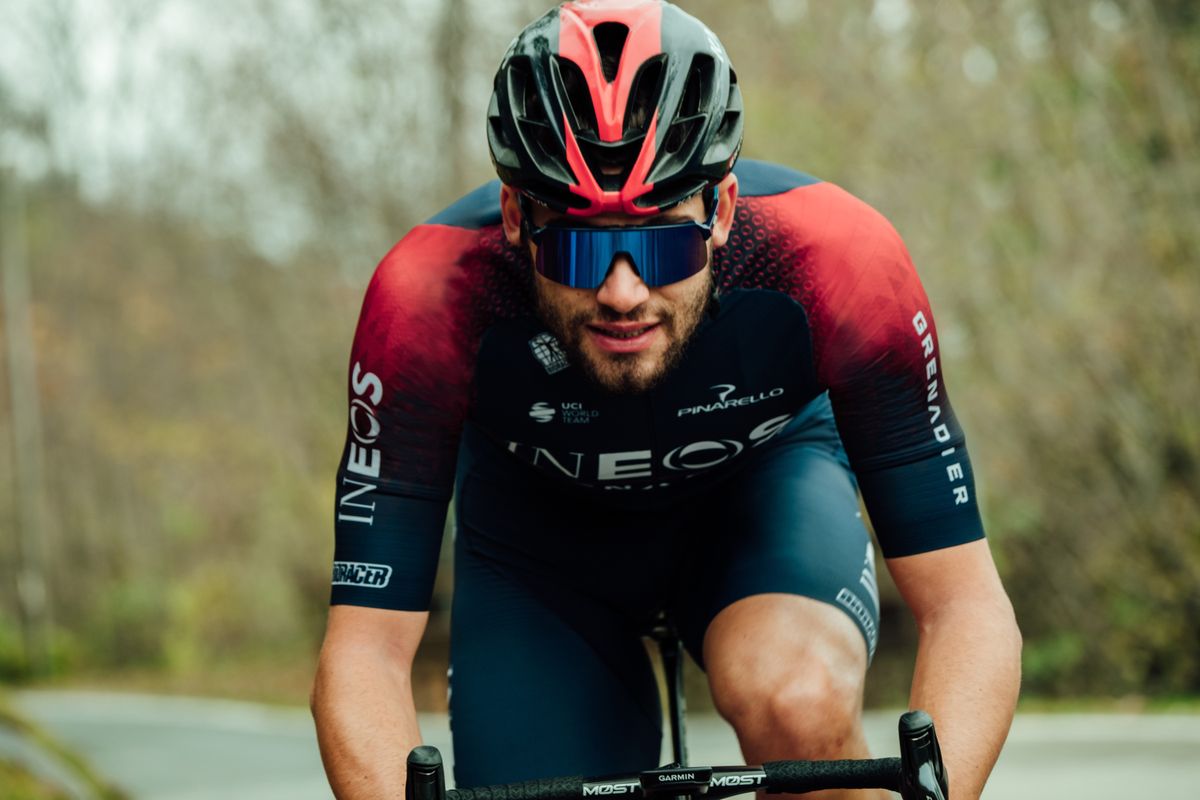 After a five-year partnership with Castelli, Ineos Grenadiers announced in July that they would be parting ways, and from 2022 onwards would instead wear kit supplied by Belgian custom clothing company, Bioracer.

On Friday, the British team unveiled the first design from that new relationship, with their kit for the 2022 season.

The design is a continuation of the theme that the team has used since the 2020 Tour de France, when it transitioned from the red and black of Team Ineos to the navy and red colourway of Ineos Grenadiers.

The new design loses the red ‘A’ shaped logos that featured prominently on the old design. There is a panel of Brigade Red across the shoulders. Starting at the neckline in a Flag Blue which is dotted with small red ‘O’ logos taken from the Ineos branding. The prominence of the red grows to the shoulders, and then darkens to the blue in a repeating triangle pattern that transitions down the arms.

According to the team, this triangular pattern is made up of Grenadier Lambdas, and is included as a reference to the ‘how fast feels’ philosophy that surrounds this kit launch. A large, white ‘Ineos Grenadiers’ logo adorns the chest, along with the Pinarello and Bioracer logo on each side. At the rear, the blue base is interrupted by a red stripe, which is also made up of the triangular texture found on the sleeves.

The kit marks the first design in what is being described as a multi-year partnership between the two parties. Ineos Grenadiers as a team is known for seeking advantages in the smallest details and it was that philosophy that brought the term ‘marginal gains’ into the mainstream. The Belgian apparel brand, which was founded in 1968, has access to a wind tunnel which it built in conjunction with fellow Belgian brands Ridley and Lazer in 2013. It also has access to a state-of-the-art service centre with facilities that extend to bike fitting, saddle pressure sensing, aero testing, custom footbeds and of course custom clothing.

“We’re extremely excited about Bioracer’s expertise in both speedwear and custom fit and are looking forward to welcoming the Bioracer family into the team,” read a statement from the team when the partnership was announced.

The team principal, Dave Brailsford then backed up that statement in September by saying: “I’ve always hoped and believed that we would work together one day so I am genuinely delighted that day has now come. The ethos that underpins their work is built around speed – pure and simple – with athletes right at the heart. We share a common sense of adventure, a desire to innovate and do things differently but above all a passion for the race and for racing. We look forward to writing a new successful chapter together and showcasing their brilliant kit on the road in 2022 with our Grenadier spirit.”

The partnership marks the first headline deal with a WorldTour team for Bioracer, although it’s not the first time the brand has supplied kit at this level. Under the guise of the Oakley name, Bioracer supplied kit to Dimension Data from 2016 to 2018 and today is working closely with Team DSM as part of its in-house ‘Keep Challenging’ clothing brand. Bioracer has also supplied kit to both the Belgian and Dutch federations since the mid-1990s. It continues to do so, and currently also supplies the German federation, Russia, China and more.

“Our growing ambition calls for a more active role in the spotlight,” explains Bioracer CEO Danny Segers. “Together with the best Grand Tour team of the last decade, we will be continuously pushing the boundaries of cycling performance. The Ineos Grenadiers stand out in the international peloton all year round, so we will certainly see the Bioracer logo on stage many times.”