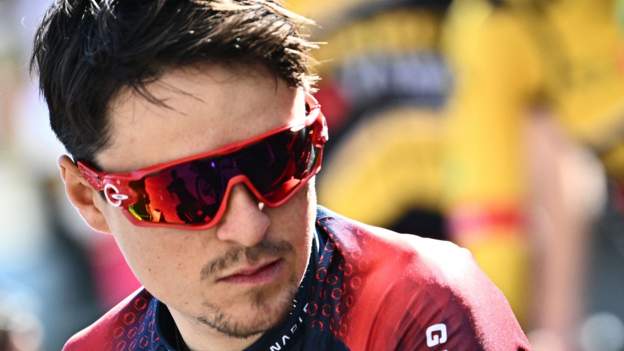 Tom Pidcock, left, will not take part – but Richard Carapaz, right, will lead the team

Britain’s Tom Pidcock will not feature in the Giro d’Italia after Ineos Grenadiers announced their line-up.

Pidcock, 22, who signed a five-year contract last month, could instead take part in the Tour de France.

“The team has shown already this year just how strong and competitive it can be,” said deputy team principal Rod Ellingworth.

He added: “The younger riders have stepped up and surpassed the mark we originally set for them, and it’s been energising for every member of the team.”

Ineos have won several early-season races in 2022, including the one-day ‘Monument’ Paris-Roubaix, thanks to Dylan van Baarle.

The team have a strong record in the three-week race – which begins in Budapest in Hungary on 5 May – with Colombian Egan Bernal winning in 2021 and Britain’s Tao Geoghegan Hart victorious the year before.

Bernal suffered serious injuries in a training crash in January and is only likely to compete late on this season, if at all.

Tulett, 20, will play a support role for his first Grand Tour, which has 21 stages, 18 of which will take place in Italy after the three-day start in Hungary.