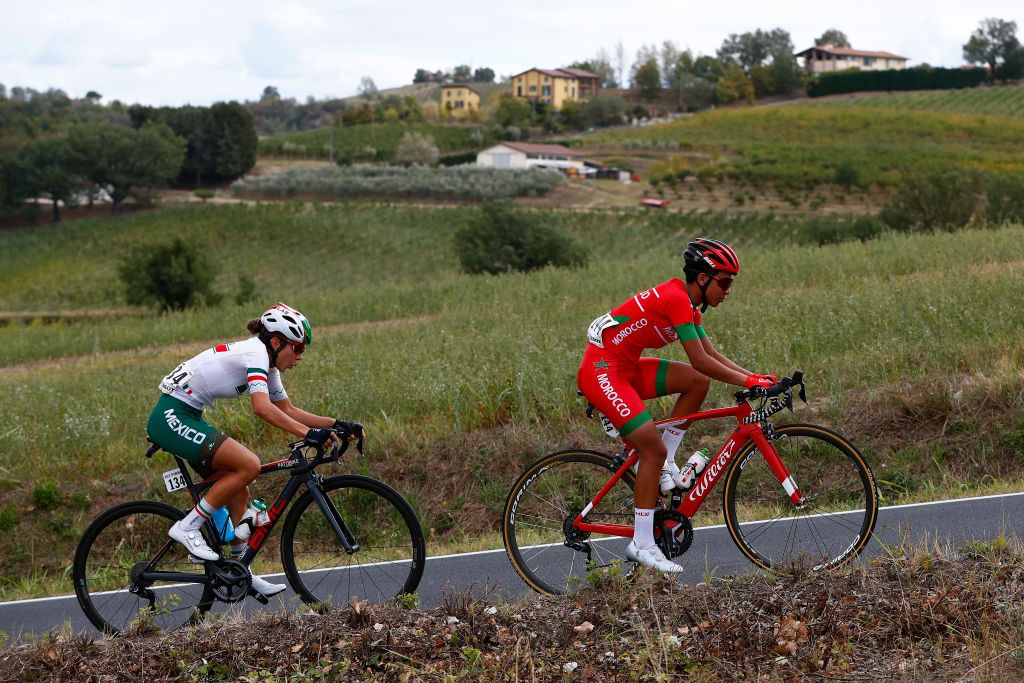 Fatima Zahra el Hayani (WCC Team) is a two-time Moroccan Champion who has represented her nation on cycling’s world-class stage and at the UCI World Championships.

The team grew from a wider WCC programme that, this year, has welcomed 50 athletes to train at the World Cycling Centre in Aigle, Switzerland.

In an Q&A feature series, Cycling News will introduce some of the newest and existing members of the programme as they develop in their respective disciplines – Road, Track, MTB and BMX – and pursue their Olympic dreams.

: Can you tell me about where you’re from and your home town?

Fatima Zahra el Hayani: I was born on 23 July 1996 in Sidi Slimane a small town in Morocco.

CN: How did you get involved in cycling and at what age?

FH: My dad gave me my first bike (an old bike) for my school certificate at the age of 15 years old, so that I could go to school. I started competing at the age of 17 years old in the small club in my town of Sidi Slimane and I went straight into the Moroccan national team..

CN: Is cycling popular and is it a supported sport in Morocco?

FH: Morocco is a poor country, in general, but people love this sport. Unfortunately, very few people have the financial means to practice it.

CN: Can you describe the level of support you have had in order to develop in the sport of cycling at home?

FH: My first competition bike was lent to me by my club in Sidi Slimane. Later, after several medals at the African Championships, our federation lent me a bike through my national technical director. When he returned to France, he brought me back with him, and found me the company GS Sport as a sponsor. They provided me with all the equipment and clothes I needed to do high level sport.

CN: You are the two-time national road race champion and a national time trial champion. Have these victories been important in your career?

FH: I am always proud to wear the national champion’s jersey of my country in international races, but frankly, these victories have not brought me anything financially nor recognition in my country.

CN: You competed for your nation, Morocco, at the 2020 World Championships. Could you tell us about this experience and representing your country this event?

FH: It is a great memory for me because I was the first Moroccan woman to start the World Championship. I’m just disappointed because, on the plane my bike was broken, and I had to find a bike in a hurry to take the start. I, frankly, didn’t manage to perform 100 per cent. This year, I will be at the start of the 2021 World Championship and I really want to represent Moroccan and Arab women at the highest level.

CN: You raced with Arkea, a Continental women’s team in 2020 at European races, what were those experiences like for you?

FH: In 2018, I had represented my red Mediterranean country in Spain, and then in 2019, I had only participated in boy’s races in France. In 2020, it was a great technical experience for me in women’s professional cycling and also a great human experience. I learned the hard way that some people in the professional world are not ready to welcome us African women. To be honest, about this experience, I’ve turned the page. I realised that the way is long, again, to change few cultures.

CN: How did you get connected with the WCC Team, also a Continental team, for 2021?

FH: The day after the World Championships, I resigned from Team Arkéa, but I don’t want to talk about it any more than that, I’m going to start again, and with a clean sheet and build my future.

My coach, who works on development projects for the World Cycling Centre, immediately informed the UCI of my personal situation. The next day, I was contacted by Vincent Jacquet, the director of the World Cycling Centre, and by [UCI President] David Lappartient, to tell me not to worry, to take the time to look after myself, and that they were going to get me into the WCC Team, so that I could succeed in this sport because they had confidence in me.

CN: Can you tell me what support you will receive this year through the WCC Team?

FH: The World Cycling Centre provides us with a very high level of material, medical, infrastructure and quality staff. We are housed and fed. I and my teammates are really willing to give our best every day to reach the highest level and to show that diversity has its place in our sport.

CN: What competitions will you be at this year?

FH: We have a very nice race calendar, but at the moment, as for many teams, there are a lot of uncertainties with the coronavirus. Nevertheless, we are working very hard in training to be ready as soon as it is possible for us to participate in high level races. My personal goal is to give my best every day, to gain as much experience as possible and to try to open the doors for the top level.

CN: What are your biggest goals in professional road cycling?

FH: My biggest goal is to show who I am and what I am worth through professional road cycling. My dream, even if I know I still have a lot of work to do, is to play the leading roles one day in the professional races and at the World Championships.

About the World Cycling Centre programme

Home to the headquarters of the Union Cycliste Internationale (UCI), the UCI World Cycling Centre (WCC) is an elite coaching and training centre in Aigle, Switzerland. Opened in 2002, the UCI WCC welcomes more than 150 young men and women every year in cycling’s Olympic disciplines of road, track cycling, BMX Racing, BMX Freestyle and mountain bike.

These athletes arrive at the UCI WCC after a thorough talent identification process carried out in collaboration with the UCI’s five Continental Confederations. Since 2004, UCI WCC trainees have won 23 Olympic medals: three gold, 10 silver and 10 bronze either during or after their time in Aigle. Added to this are more than 70 UCI World Championship podiums including 41 titles of UCI World Champion across the different disciplines and categories.