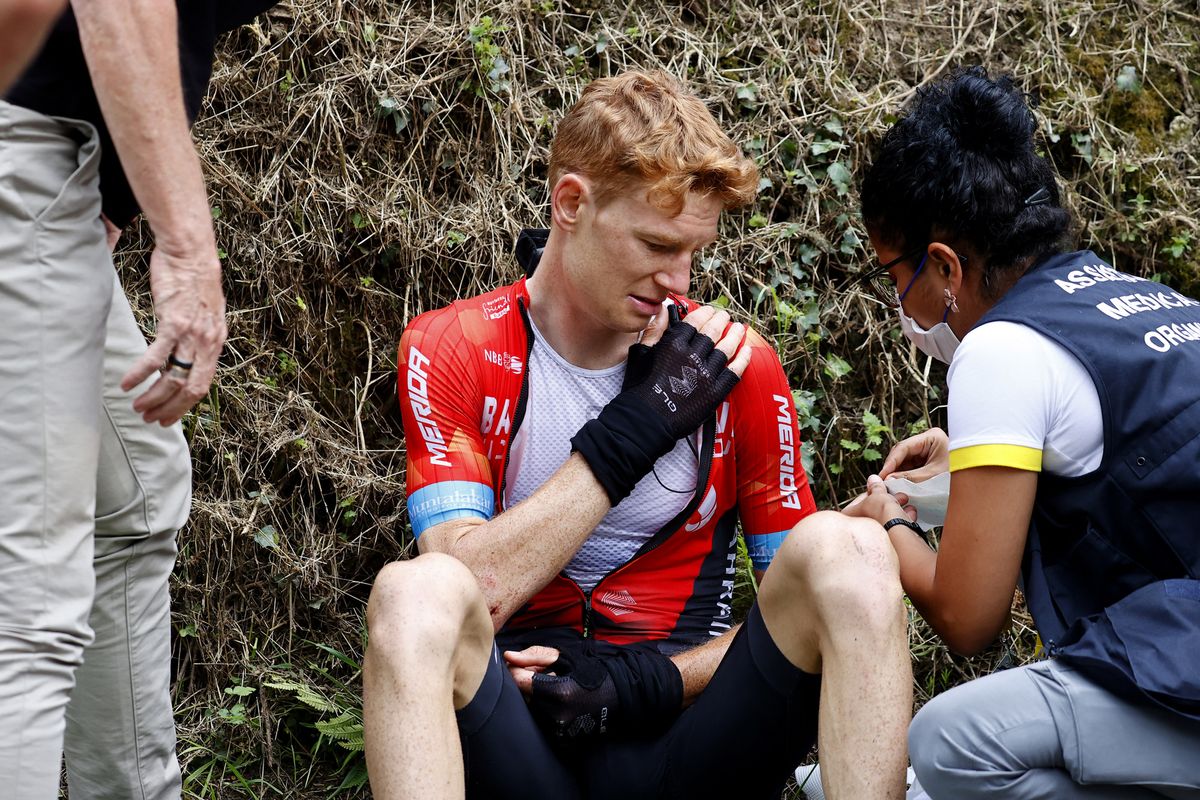 Jack Haig has been forced to pull out of the Australian team for the Tokyo Olympic Games as the Bahrain Victorious rider is facing a longer than anticipated recovery from the collarbone fracture he sustained in a crash on stage 3 of the Tour de France.

The 25 year old Australian had been hoping he would recover in time for the 234 kilometre men’s road race on July 24, which tackles 4,865 metres of vertical ascent on a course including the outer slopes of Mt Fuji. However, now another rider will be selected to represent the nation alongside Richie Porte – who stood on the Tour de France podium last year – two-time time trial world champion Rohan Dennis and Lucas Hamilton, as long as his Tour de France injury doesn’t also prove to be an issue.

“Unfortunately my fracture was much worse than first expected,” said Haig in an Instagram Post. “The surgery was long and more invasive than normal, making the recovery period longer. I should hopefully be outside on the bike by the end of this week. Unfortunately this means I will be missing out on the Olympics.”

Haig said the Australian Olympic team had been very understanding and allowed the maximum amount of time for recovery, but that he wouldn’t be ready soon enough.

“On the upside it’s allowed me some time at home to be with the family and enjoy summer while I’m recovering,” said Haig.

It is the second change to the team since the Olympic selections were announced, with Australian champion Cameron Meyer bowing out to spend time with his family as his father battles Stage 4 brain cancer. He was replaced by Team BikeExchange teammate Hamilton, but the 25-year-old has also suffered an injury since been selected. He pulled out of the Tour de France after a crash on stage 13, suffering an injury to his right shoulder with X-rays showing an acromioclavicular, or AC joint, dislocation.

Hamilton and Haig are both part of the rising crop of young Australians that are making their mark in some of the biggest races, with both lining up to lead the GC challenge for their teams at the Tour de France this year. The same can be said for AG2R Citroën’s Ben O’Connor, who is currently sitting in fifth overall and won on the summit finish of Tignes on stage 9.

Haig had started his Tour well, faring the best of all the Australian’s in the crash marred opening stage. He came through stage 1 with fourth and finished stage 2 in tenth spot, before the crash in the final kilometres of stage 3 spelled the end of not only his Tour de France but also ruined his chances of making an Olympic debut.

There will be no shortage of options to replace Haig given the recent emergence of a number of Australian riders that suit a climb heavy course. O’Connor is clearly firing on the climbs, but he is not the only one. Last year Jai Hindley made his mark by taking second place at the 2020 Giro d’Italia, although the fact that his current race form is somewhat of an unknown might work against him as he hasn’t pinned on a number since pulling out of this year’s Italian Grand Tour with an extremely painful saddle sore. Nick Schultz has recently showed his capability in a support role, riding to back Team BikeExchange leader Simon Yates at the Giro d’Italia, but he too has had a racing lull since leaving the race after stage 17 with a fracture in his hand.

Then there’s the possibility of looking to a more established rider such as Luke Durbridge (Team BikeExchange), who has made no secret of his ambitions to represent the nation, with his time trial skills an asset as well as his ability as a workhorse on the road. The 30 year-old Western Australian may not be known for his ability to climb but he has been prominent in breaks on stages with solid climbs this Tour de France, a move that could potentially allay some doubts about his ability to hang in there long enough to be a useful teammate when the road turns up.

AusCycling performance director Simon Jones said in a statement that the selection panel was currently discussing suitable options to nominate as a replacement rider to the AOC for selection to the men’s road team for the Tokyo Games.