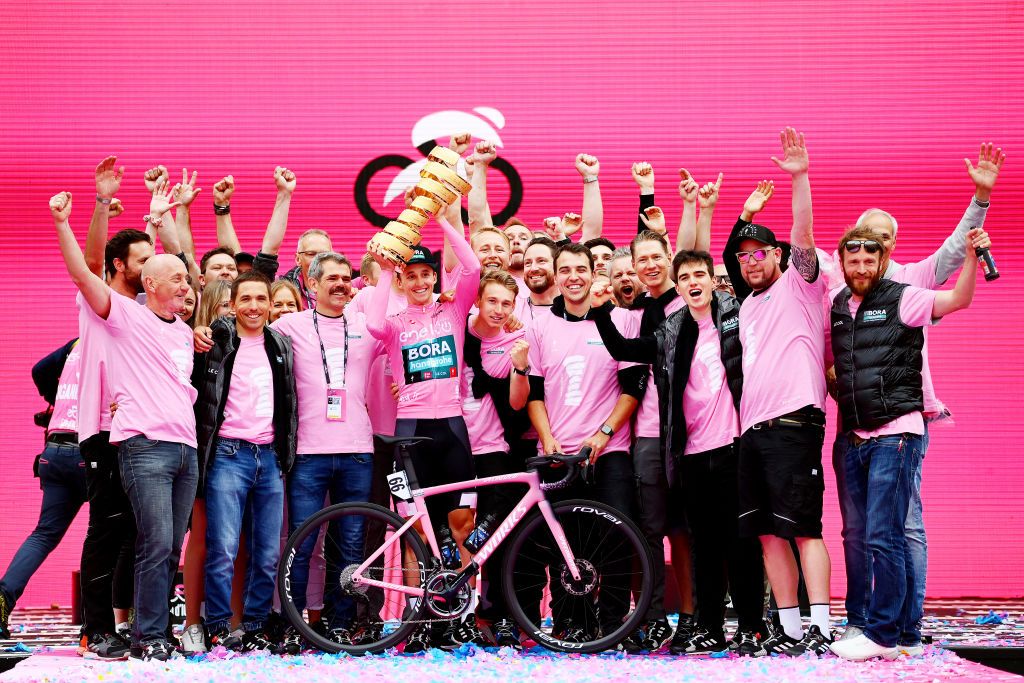 Wilco Kelderman greeted the end of his Giro d’Italia with considerable understatement. “It’s nice,” he smiled. “It was a really nice three weeks.” The Dutchman had just completed the final time trial in Verona, and now he awaited news of his Bora-Hansgrohe teammate Jai Hindley’s progress in the 17.4km test.

Two years ago, Kelderman was Hindley’s stablemate at Sunweb when the Australian was unsuccessfully defending the maglia rosa on the final day in Milan. On that occasion, Kelderman ended the race third overall and nursing regrets of his own regarding the team’s strategy on the pivotal Stelvio stage.

This time around, and despite the mechanical incident that doomed his own overall challenge at the end of the opening week, Kelderman came away from the Giro with altogether different feelings.

If Hindley ultimately won this Giro with his searing attack atop the Passo di Fedaia on Saturday, then the tone of Bora-Hansgrohe’s race was set a week earlier in Turin, when Kelderman shredded the leading group with a towering display of pace-making.

“I don’t think about the disappointment for myself anymore. This gives me so much more than just thinking about myself, this team effort. It’s not only Jai winning this. It’s been a super team effort,” Kelderman said. Hindley hadn’t yet reached the intermediate checkpoint, but his confidence in his teammate was total.

Last year, Kelderman placed fifth overall at the Tour de France in his debut season with Bora-Hansgrohe, but for 2022, mindful of Tadej Pogačar’s dominance in July, the German squad made the conscious decision to dispatch its best stage race riders to the Giro. Kelderman formed a triumvirate of leaders at the start in Budapest with Emanuel Buchmann and the new arrival Hindley, while climbers Lennard Kämna and Ben Zwiehoff were also in the selection. Their collective strength proved the equal of Ineos, winners of three of the previous four editions.

Kämna, winner atop Mount Etna on stage 4, contributed richly to the turning point of the entire race on the Passo Fedaia on Saturday. The German dropped back from the early break to produce a short but pivotal stint of pace-making on Hindley’s behalf. As he dialled up the pressure 3km from the top of the Giro’s final mountain pass, Carapaz’s resistance finally crumbled.

“I did one really hard pull, all that I had, and Carapaz was dropped, and Jai could take a lot of time,” Kämna said almost matter-of-factly when he reached the top of the Fedaia. “I was a bit surprised, but on the other hand, I was super happy about it. For us, it was a dream scenario.”

Kämna was scarcely more effusive after he completed his time trial in Verona on Sunday. “It was a nice feeling to be there and to help to do something good,” he said simply. Mercifully for the reporters assembled in the Arena, Kelderman was altogether more loquacious.

“It was crazy, actually. I was pretty close behind and I heard everything in the earpiece. I saw some familiar faces on the climb and the emotions came out. It was crazy, I had a tear in my eye from happiness,” said Kelderman. “I knew he was strong, but Carapaz had already won the Giro and he’s super strong. So you cannot expect that he would drop him so hard on the last climb. It was beautiful, actually.”

When Bora-Hansgrohe first entered the WorldTour in 2017, it did so thanks largely to the points total of new signing Peter Sagan. The three-time world champion defined the team’s ambitions in those years, notching up three more green jerseys at the Tour and victory at Paris-Roubaix in 2018.

Although Bora-Hansgrohe had already started to focus on developing German talent in the latter part of Sagan’s tenure, the team’s emphasis switched still further following his departure for TotalEnergies last winter. Sam Bennett returned from a two-year spell at QuickStep to be the team’s lead sprinter, but the squad also carefully weighed up how best to deploy its stage racing talent. Despite his troubled 2021 season, Hindley offered Bora-Hansgrohe a new dimension over three weeks. The decision was made to focus on the Giro rather than the Tour.

“Jai had already been second at the Giro and that’s not something you do by accident,” Directeur Sportif Enrico Gasparotto – another new arrival – told BiciPro. “He had incredible consistency not only on this Giro but all winter too, between races and preparations. He was fifth at Tirreno-Adriatico too, which is proof of that.”

Kelderman, for his part, saw parallels with his and Hindley’s former team. In 2017, Kelderman was part of Tom Dumoulin’s supporting cast at the Giro, even if a crash forced his early abandon. He watched the rest of the race from home, coming to the conclusion that Dumoulin’s eventual victory had changed the dynamic of the entire organisation. Kelderman maintained that Hindley’s Giro victory could give Bora-Hansgrohe similar momentum.

“It does a lot,” Kelderman said. “A lot. I was already talking with the sports directors. I remember 2017, when Tom won the Giro with Sunweb. He won the Giro, then in the Tour they had the green jersey, polka dot jersey and a few stage wins. I was fourth in the Vuelta and then we won the World Championships team time trial. I think everyone sitting at home from Bora-Hansgrohe gets more motivation and more morale. I think there’s more in the pocket for this season.”

An hour or so later, when Hindley signed off on his race winner’s press conference, he suggested that his Giro victory was only the beginning.

“I think it’s first time Bora has had a rider on the podium of a Grand Tour [Buchmann was fourth in the 2019 Tour – ed.] Definitely watch out for Bora-Hansgrohe in future Grand Tours,” Hindley said, and then broke into a smile, “because we’re not here to put socks on centipedes, mate.”