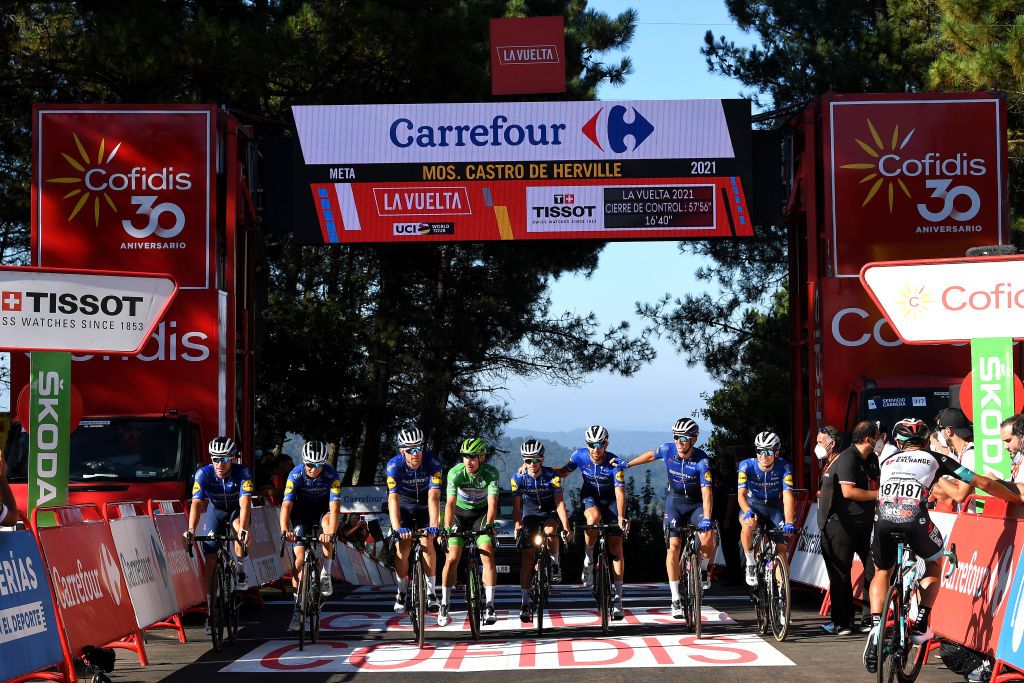 With the help of his Deceuninck-QuickStep teammates, Fabio Jakobsen made it through the final mountain stage 20 at the Vuelta a España on Saturday, bringing the green jersey of the points classification leader with him to the start of stage 21 in Santiago de Compostela.

In surviving another brutal stage in Spain, the Dutchman has completed a phenomenal comeback from the career-threatening crash that he suffered at last year’s Tour de Pologne and is now on the verge of winning his first career Grand Tour points jersey.

The 25-year-old was part of the final group across the line atop the Alto Castro de Herville – accompanied by seven other riders at 41:13 behind stage winner Clément Champoussin (AG2R Citroën).

The men in question were the full Deceuninck-QuickStep team, with all eight men crossing the line arm in arm as Jakobsen comfortably beat the time cut. Finishing alongside the riders who had helped him to three stage wins at the Vuelta was a special experience, he said afterwards.

“This is amazing,” Jakobsen said. “I am so happy I could cross the line together with the guys, because without them I wouldn’t have won the sprints here or the green jersey.

“They’ve always been by my side, I love my teammates and I love being part of Deceuninck-QuickStep, just saying it makes me very proud.”

Jakobsen is now just 33.8 kilometres away from securing the green jersey, the classification he leads by 71 points from race leader Primož Roglič (Jumbo-Visma).

He said that he’s glad to have put the challenges of the mountain stages behind him, adding that he couldn’t have wished for any more from his time in Spain.

“The last few days have been really hard, and the legs are empty, but I am happy with what I achieved these weeks, I couldn’t have asked for more,” said Jakobsen.

He will remain at the team until 2023 having signed a contract extension with the squad back in July, and looks set to be their main sprinter heading into next season following the departure of Sam Bennett.