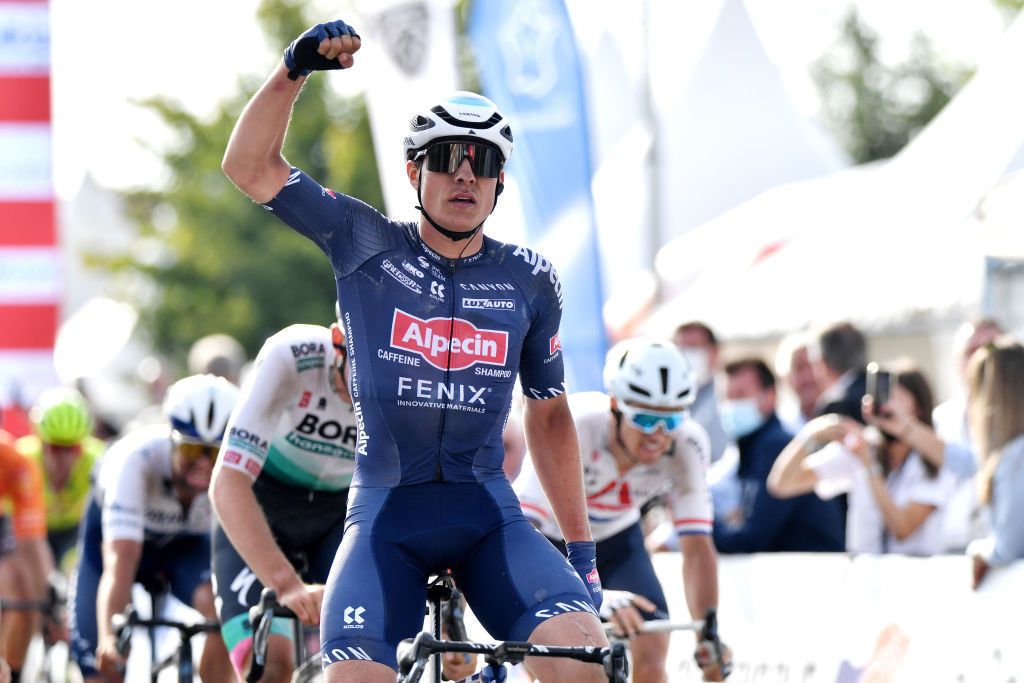 Jasper Philipsen (Alpecin-Fenix) continued his winning streak on Tuesday, working his way through the 12 cobbled sections of GP de Denain to capitalise on an unexpected sprint finish at the end of the race.

When Philipsen returned to racing following a break after the Vuelta a España on Friday, he first managed to find his way through to the front  during a hectic sprint to take the win at Kampioenschap van Vlaanderen. Then on Friday it was a convincing win at Eschborn-Frankfurt before the 23-year-old made it three for three in the north of France at GP de Denain.

A group of 12 had made it off the front of the race but were caught before the line, leaving Philipsen working to find an opening to get through to the front of the bunch for the sprint. Emerging at the last minute, he quickly accelerated to trump Jordi Meeus (Bora-Hansgrohe) and Ben Swift (Ineos Grenadiers).

“It was a super cool win,” Philipsen said in a report on Dutch website Wielerflits. “It was a tough course. Because a large leading group was gone, I didn’t expect a sprint anymore. We didn’t have many teammates left, so it was difficult to position. In the end I found the gap to be able to sprint for the win.”

The GP de Denain, originally scheduled for March this year, was cancelled in 2020. Philipsen’s teammate Mathieu van der Poel was the last winner in 2019, when he caught the break and then held off the charging peloton to deliver a solo victory. Van der Poel didn’t line up to defend his title, though, after having confirmed that he would be racing the World Championships elite men’s road race.

Philipsen’s GP de Denain win was his eighth for the season, with the Belgian rider taking two stage wins at the Vuelta a España before he left early as he was suffering with a mild fever and didn’t want to “jeopardize the rest of his season”. Now the rider is thinking beyond his three latest wins and ahead to the remaining races on his calendar for 2021, which includes the Paris Roubaix on October 3.

“I still have three more races and I want to try to keep my form as good as possible,” Philipsen said in the Wielerflits report. “I hope to win again this year,”

That effort to keep his form, included an extra 55km ride home to finish off the 200km race winning ride.