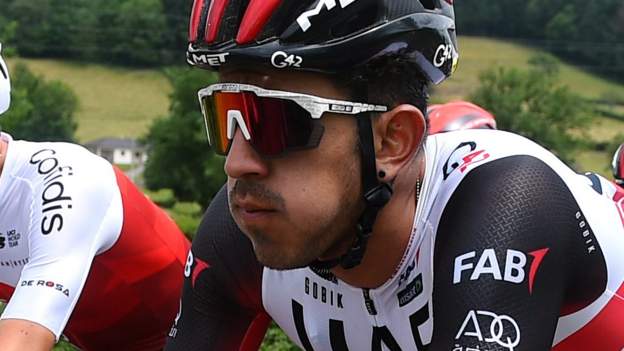 Page, left, and Molano sprinted for the line after the altercation

Colombia’s Juan Sebastian Molano has been disqualified from the Criterium de Dauphine after hitting an opponent twice during stage six.

The UAE-Team Emirates rider was seen arguing with France’s Hugo Page in the closing stages before shaking his bike and striking him on the helmet.

Molano, 27, then raced to Page’s team bus to remonstrate further before striking him on the head again.

France’s Valentin Ferron won the stage for Total Energies from a breakaway.

Page, 20, of the Intermarche-Wanty Gobert team, did not respond physically in either instance.

Molano has been pulled from a race by his team before, after posting “unusual physiological results” during the 2019 Giro d’Italia.

UAE-Team Emirates have won the Tour de France for the past two seasons through Slovenia’s Tadej Pogacar.

The eight-day Dauphine is a high-profile event used a warm-up for the Tour, which starts in Copenhagen on 1 July.

There has already been drama after overall leader Wout van Aert of Jumbo-Visma was beaten to the line on stage three by France’s David Gaudu of Groupama-FDJ after the Belgian celebrated too early.

Van Aert remains in the yellow jersey, one minute three seconds ahead of Italy’s Mattia Cattaneo of Quick Step-Alpha Vinyl.