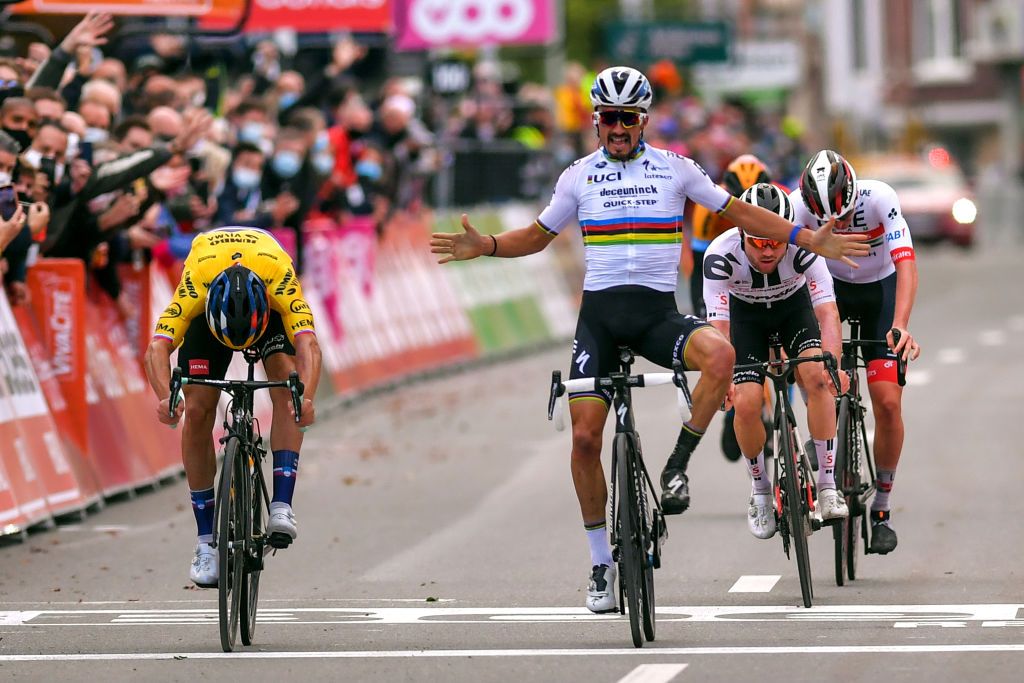 Take two. Last October, Julian Alaphilippe thought he had become the first world champion to win Liège-Bastogne-Liège since Moreno Argentin, but unlike in 1987, the late drama didn’t play out in the rainbow jersey’s favour.

Alaphilippe’s premature celebration launched a thousand memes, even if his subsequent declassification to fifth place for his deviation in the sprint at least tempered his disappointment at being pipped to the line by Jumbo-Visma’s Primož Roglič.

“It’s my big objective for the start of the season,” he said on Friday. He warmed up for La Doyenne this week by racing all the way through the line atop Mur de Huy to beat – who else? – Roglič to the line at Flèche Wallonne.

It means that Alaphilippe is seeking to become the eighth rider in history to win both Flèche Wallonne and Liège-Bastogne-Liège in the same year, and the first since the finale of the latter was moved from the Côte d’Ans back into the centre of Liège two years ago.

“They’re two different races even if the riders who can win them are the same,” Alaphilippe told reporters in a video conference. “Liège should be more open before the finale, whereas even though the route at Flèche is hard, it usually comes down to a hilltop race at the end.”

Alaphilippe conquered the Mur de Huy for the third time in his career on Wednesday but he knows better than most that a strong display there is an indication of form rather than a guarantee of success at Liège-Bastogne-Liège.

“I know why I came to the Ardennes Classics – to try to win,” Alaphilippe said. “It was great to win Flèche but now I’ve moved on and I’m focused on Liège-Bastogne-Liège. Wednesday confirmed to me that the work has been done well and that’s good, but you can’t get too enthusiastic either. Liège is a different race to Flèche, even if it’s a good indicator.”

The list of potential winners in Liège is a long one, with men like Max Schachmann (Bora-Hansgrohe), Alejandro Valverde (Movistar), Tadej Pogačar (UAE Team Emirates), Marc Hirschi (UAE Team Emirates) and Michael Woods (Israel Start-Up Nation) among them, but much of the pre-race discussion has centred around Alaphilippe and Roglič.

“Clearly, he’s among the favourites,” Alaphilippe said of Roglič. “He did a big thing at Flèche with that attack from a long way on the Mur. I knew he was strong from what he’d done since the start of the season, and he showed at Flèche again that he’ll be up there at the end of a hard race. He’ll be very hard to beat.”

While the old finale over the Côte de Saint Nicolas was arguably better suited to Alaphilippe’s singular characteristics as a puncheur, the current format lends itself more obviously to the kind of open, aggressive racing that might see teammates like João Almeida, Mikkel Honoré and Mauri Vansevenant go up the road to prepare the terrain for the Frenchman.

“I liked the old one a lot and the combination of Saint Nicolas and Ans probably corresponded better with my characteristics, but it’s still a race that suits me on this parcours,” said Alaphilippe, who described the race as the centrepiece of an all-action Spring that saw has already seen him place second at Strade Bianche, attack on the Poggio and in the mix at the Tour of Flanders.

“In the last few weeks, I’ve been working more on long efforts than short ones. I felt my condition was good and I was reassured after Flèche. Liège is a race that I’ve always liked, and where La Redoute and, above all, la Roche-aux-Faucons make the difference. They’re not long, but they come at the end of a hard race.”

A week ago, Alaphilippe confirmed that he had signed a three-year contract extension that will keep him at Patrick Lefevere’s team until the end of 2024.

“It’s always good for the head to be more serene and not have to think about the transfer market,” he said on Friday, though he downplayed the idea that securing his future or winning Flèche Wallonne had lightened the burden of expectation ahead of Liège-Bastogne-Liège, where he placed second on his debut in 2015.

“It’s a good kind of pressure,” Alaphilippe said. “That pressure is there because when you set yourself big objectives, you always want to do well in them.”