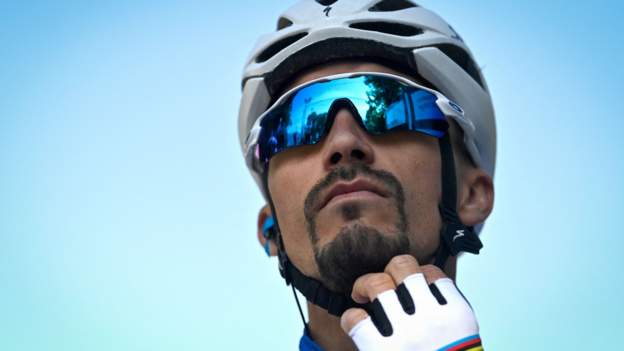 Alaphilippe, in white with the rainbow stripe, has won back-to-back World Championships

The 29-year-old Frenchman’s condition is stable, but he has been kept in hospital for observation, said his Quick-Step Alpha Vinyl team.

A huge crash brought down many riders 62km out, with Alaphilippe landing in a ditch and hitting a tree.

It was a first Monument – one of the five biggest one-day races – win for the Belgian, a Quick-Step team-mate of Alaphilippe, who attacked 30km from the line and rode solo to take a spectacular victory.

“It’s crazy,” said Evenepoel. “My first ever Liege and I win it.”

Britain’s Tom Pidcock, Ineos’ Olympic mountain bike champion, was one of the first to fall and about 30 riders crashed in total on a fast, downhill section of the course in the Ardennes forest in Belgium.

Team-mate Ilan Van Wilder also broke his jaw in the incident on Sunday.