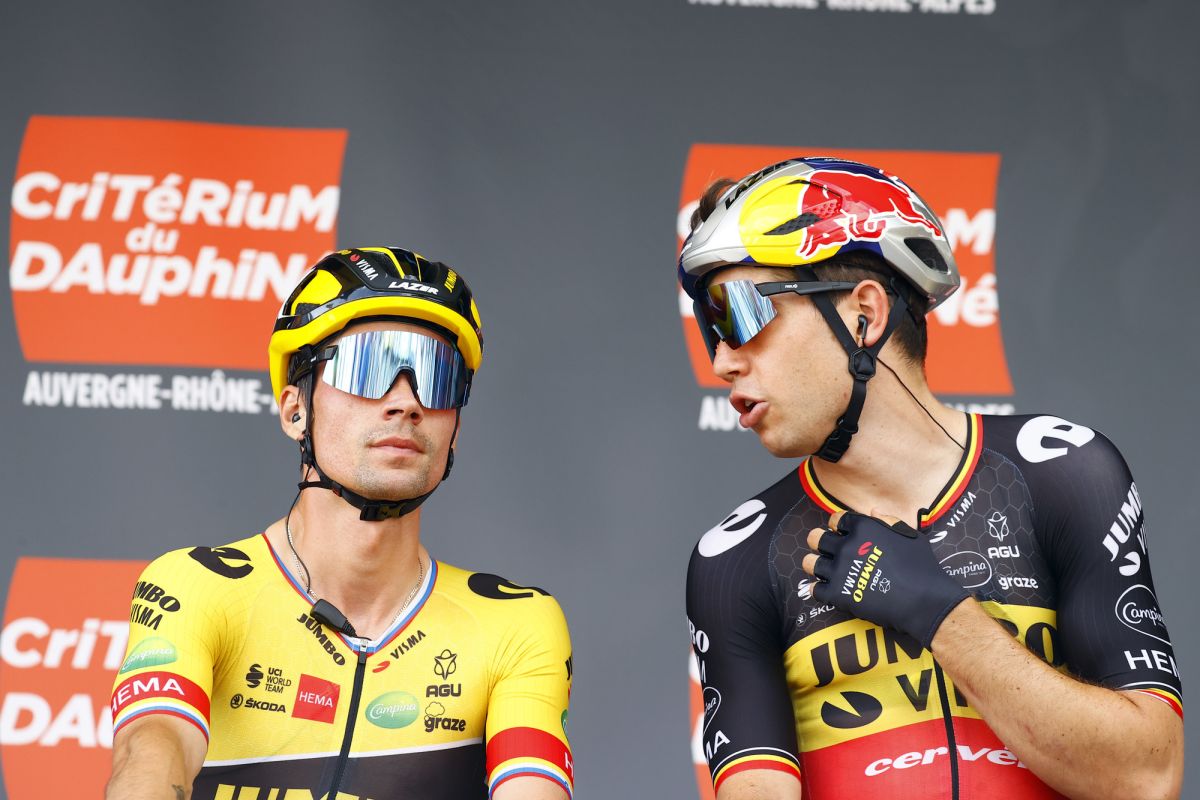 After a largely quiet opening three days in terms of the general classification, the overall standings of the Critérium du Dauphiné have been upended for the first time at Wednesday’s stage 4 time trial.

Unsurprisingly, it’s Jumbo-Visma who have come out on top as the strongest team, once again showing themselves at the top of the standings during the 31.9km test from Montbrison to La Bâtie d’Urfé.

The team’s superstar all-rounder Wout van Aert is in yellow, his lead up to almost a minute after finishing a narrow second to Filippo Ganna on the day, while race favourite and team leader Primož Roglič lies in third, 56 seconds down, after finishing fifth.

His co-leader, Jonas Vingegaard, was the third ‘killer bee’ in the top 10, climbing up the rankings to fourth overall, 30 seconds behind Roglič. As a result, the team are primed, more than any other, to take advantage and secure what would be their first-ever overall victory at the race over the closing pair of mountain stages at the weekend.

Van Aert finished second among the lead group of 26 on the mini-summit finish at Chastreix-Sancy on Tuesday, though despite his hefty GC lead it’s unlikely he’ll remain in yellow through the end of Sunday’s closer atop the 11.3km, 9.2% inclines of the Plateau de Solaison, even if he might do so over the two HC-rated mountains on the road to Vaujany on stage 7.

Instead, it’s Roglič who should be in the driving seat with the luxury of two super-domestiques at his disposal for those two hard mountain stages. Looking at the top of the GC standings, QuickStep-AlphaVinyl’s Mattia Cattaneo seems the only fly in the ointment, lying second at three seconds up on the Slovenian.

Cattaneo, who has evolved into a stage race all-rounder in recent seasons, was fourth in the time trial, his primary speciality. Last year he hauled in top 10 results at the UAE Tour and Tour de Suisse as well as 12th places at the Tour de Romandie and the Tour de France, though it surely would take efforts beyond what he has so far achieved to hold off Roglič in the mountains.

Ineos Grenadiers’ young talent Ethan Hayter is the only other non-Jumbo man within 30 seconds of Roglič (or within 1:30 of Van Aert, for that matter). The 23-year-old can get results in the hills, sprints, and time trials, but again, those high mountains look a test too far – even if he has shown his talents on ‘lesser’ mountains such as those in the Volta ao Algarve back in February. Hayter and Cattaneo are both wildcards in the face of the Jumbo-Visma machine at this stage.

That cluster of riders – along with the less proven but very talented pairing of Juan Ayuso (eighth at 1:48) and Matteo Jorgenson (ninth at 1:50) – seem like more realistic challengers to the crown over the remaining days of the race.

Roglič is there to be tested

At this stage, with ‘just’ the 6.2km summit finish of stage 3 and the stage 4 time trial done and dusted, the bulk of the GC battle still lies ahead, even if Roglič lies 43 seconds ahead of his nearest realistic rival.

Roglič’s position is a commanding one, but despite the gains he made on Wednesday, it would be fair to say that he hasn’t quite looked at his best so far, something he admitted following the time trial.

On stage 3 he ultimately wasn’t a factor on an uphill sprint finish which would normally suit him down to the ground, with Van Aert instead taking team leadership reins in the final. Then, in the time trial – a discipline on which he has built most of his biggest results – he was beaten by four other riders, finishing 42 seconds down.

After two months away from racing and recovery from a nagging knee pain, a Roglič not quite in top form was to be expected this week, especially with his Tour de France peak still another month or so away. The Grand Tour is his main concern this summer, after all.

However, there remain a few more opportunities to really put him to the test this week. The upcoming two hilly stages should provide little change at the top of the GC, but the challenges of the Galibier, Croix de Fer, Vaujany, Colombière, and Solaison can provide a chance for any one of the riders listed above to really test his strength.

Roglič and Jumbo-Visma have their Critérium du Dauphiné in their hands following the stage 4 time trial – now his rivals need to be bold if they are to deny him glory in one of the few week-long stage races that doesn’t already line his palmarès.