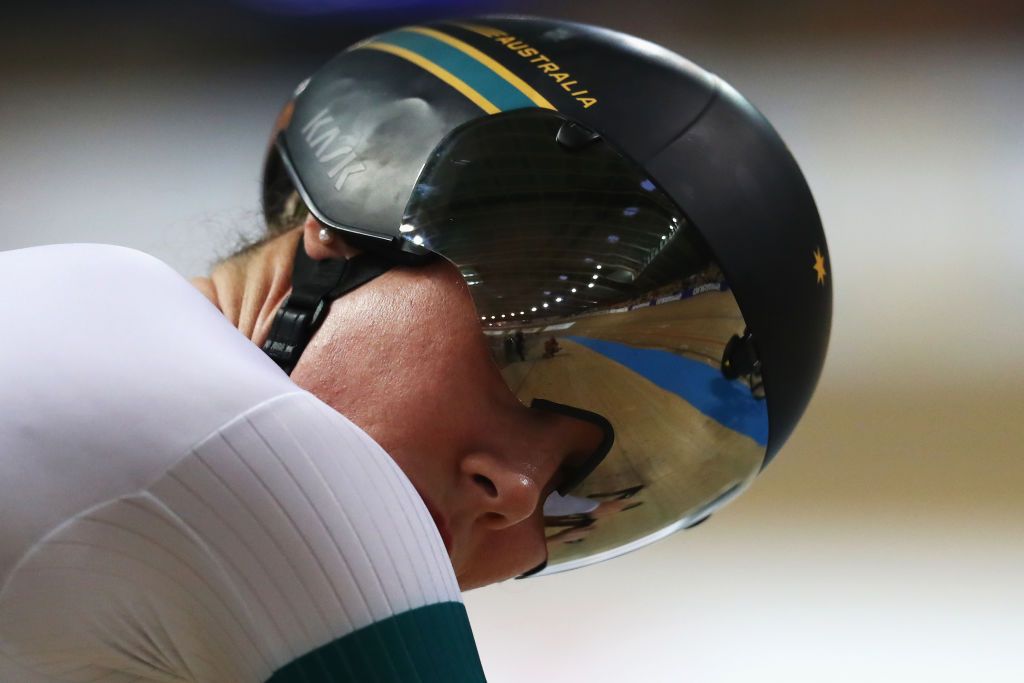 At the start of last year when Kaarle McCulloch was looking ahead to lining up at the Tokyo Olympic Games the Australian looked like a sure selection in one of the more predictable track events, the Team Sprint, where she would be lining up alongside Stephanie Morton as a gold medal favourite. Then the uncertainty started, first with a year of delay and then with the retirement of her teammate, which meant she had little option but to embrace a less predictable path on the track as well.

After fifteen years of focussing on the Team Sprint, with no replacement for Morton in sight, she was now the sole remaining representative for the nation at the Olympics in women’s track sprint. That meant there was little choice to shift over to an individual event and the Keirin, which is wildly popular in Japan, was one where she has had success, with silver at the Commonwealth Games in 2018 and at the 2019 World Championships. However, the event, which is known for its hard to predict outcomes, is not one she has had an opportunity to consistently turn her focus on in the past.

The silver medallist in the Team Sprint at the 2012 Olympics in London, who was a reserve at Rio, has largely competed in the era of the Australian track sprint powerhouses of Anna Meares and Morton. That has meant it has always been a battle to get a spot on the squad for the Olympics, let alone a slot in the individual events.

“I’ve literally gone to every event over the last 15 years of my career and prepared for the Team Sprint and prepared with a teammate,” said McCulloch from Tokyo in the days before her event. “I haven’t really had so much of a focus on the individual events because typically I’ve had the fastest rider in the world as my teammate.”

It was Morton who raced the Keirin for Australia at the last Track World Championships in 2020, coming third, and Meares who took on the event for Australia in the last two Olympics, securing bronze at Rio before retiring. Now, however, McCulloch said she feels it is the right time in her career to step into the individual competitions, even though it may not have been what she initially expected at this Olympics.

“The strategy that I’m taking with the Keirin and the preparation that I’ve done is a culmination of everything that I’ve learned over the last 15 years. Now it’s really just all up to me to see what I can do out there on the track.”

McCulloch said she is feeling well prepared for the Keirin, which includes five phases of competition, each involving a three lap sprint against a group of competitors after having had three laps behind a motorcycle to get up to speed. The rider from Sydney may not have had the benefit of international competition – given the closed border for Australia amid the COVID-19 pandemic – to get her ready for the new Olympics plan but she has still managed to find a way to practice her skills, racing with a group of riders pulled together for just that reason in the weeks before heading to Tokyo.

She has also leaned on the knowledge and experiences of former teammate, Meares, to develop her strategy and, in doing so, McCulloch has continued to lean into the unpredictability.

“I’m going for quite a risky strategy. It’s risky but I think it’ll pay off and you have to take risks at this level, particularly in an event that I had to change focus to at such short notice, with only six months to go. My strategy is a bit out there and it will either pay off really big or it won’t. We’ll see what happens on race day.”

At some level, McCulloch is just happy to be making it to the start line at this Olympics, as for various reasons it wasn’t always a given, but the circumstances also means she comes with something to prove.

“The disappointment of Rio, that was a really hard cycle,” said a clearly emotional McCulloch of missing out on competing at the last Olympics after having fought her way back from a knee injury. “I didn’t think it was going to get any harder and here I am. It’s just been pretty difficult, particularly the last twelve months since I hurt my back.”

“I’ve had a lot of setbacks. Steph retiring, COVID happening, it has been one thing after another. A couple of political things behind the scenes as late as seventy eight days to go where I didn’t even know if I was going to be here. So to be here and knowing that I’m going to line up on Wednesday, it feels really good.”

McCulloch said the uncertainty over her lining up stemmed from the fact that she was on the team and entered at the Olympics based on her selection for the Team Sprint, an event where there was a solid gold medal chance. That meant, said McCulloch, that there were both quota and selection issues to be resolved after the delay and Morton’s retirement, as well as difficult questions like “am I a chance at the medal” being thrown around.

When asked if that left her wanting to prove something, her answer was a firm “definitely”.

“I haven’t had a perfect preparation, but that doesn’t mean that I can’t be competitive,” said McCulloch.

The first rounds of the women’s Keirin begin on Wednesday afternoon at 16:10 (JST), with the repechages starting at 17:11, while the medal deciding final is on Thursday at 17:45.