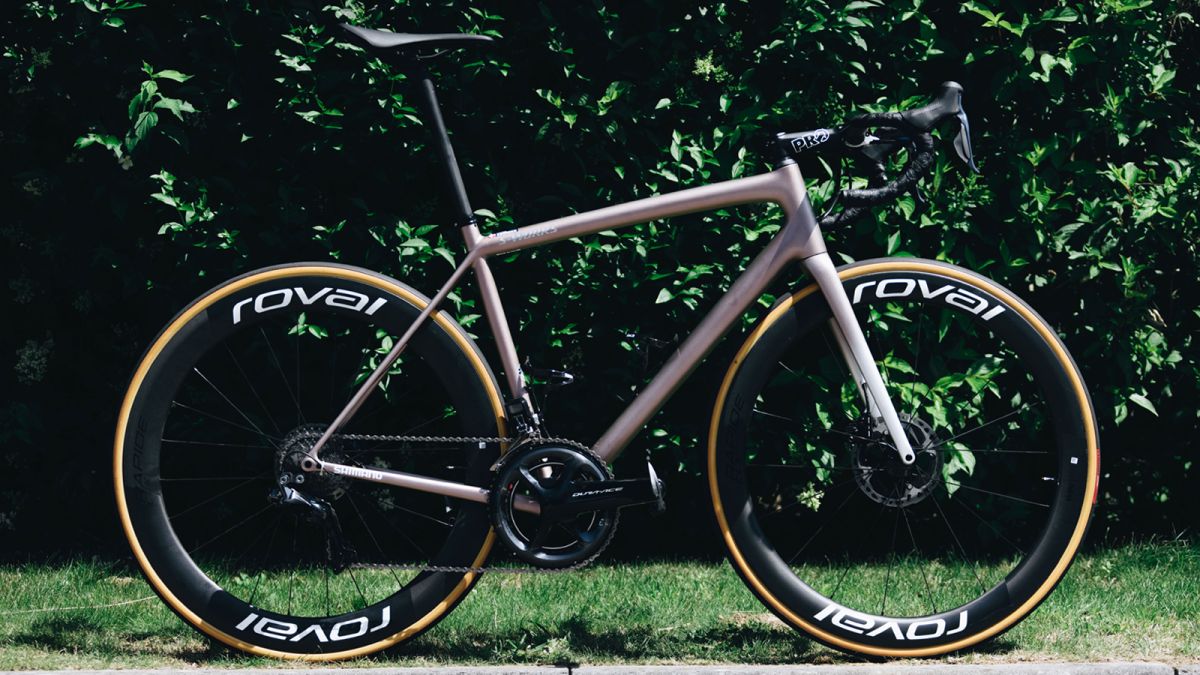 Despite being part of the team that helped to develop the Specialized S-Works Tarmac SL7, Kasper Asgreen will choose to ride the less aerodynamic Specialized Aethos in today’s stage, as well as in subsequent mountain stages at the Tour de France.

The Aethos was launched in October 2020 as a bike for the rider, not the racer. It came with the tagline of ‘break the rules’, referring to the bike’s UCI-illegal weight of 6.0kg when fitted with the lightest component list from Specialized’s range, which sits some 800g beneath the UCI’s minimum weight limit of 6.8kg. For Asgreen to ride the Aethos at the Tour de France, its weight would need to be brought back up to that 6.8kg limit.

Speaking exclusively to Cycling News, Asgreen confirmed that his Tarmac SL7 frame was also able to meet the UCI limit of 6.8kg, so both bikes could have the same race weight. This leads to the question of why Asgreen would choose the less aerodynamic Aethos, given the accompanying weight saving would have to be undone.

“Aerodynamics on a bicycle is such a small part compared to sitting in the wheels of a group, that it doesn’t really matter how fast or slow the bike is when you’re inside the bunch,” Asgreen explained.

The Tour of Flanders winner admitted that it was he who requested the bike from Specialized and explained the reasoning for his decision as being a preference for comfort over aerodynamics on mountain stages where he knows he won’t be vying for the win.

“The biggest difference between those two frames is how they ride and for me, as a bigger and heavier rider, I’ll always be in the grupetto on those days, just trying to make it through the day as easily and as fresh as possible.

“We all know that the French tarmac is sometimes a bit, let’s say, coarse and a bit rough. It gives a lot of vibrations through the body. The Aethos just absorbs that a lot better and it’s a lot smoother. If I don’t have all those vibrations into my body, my muscles, my lower back and so on, I arrive much fresher at the finish and I recover much better for the next stage.

“I’m always in a group, so I don’t have the wind head-on. I’m not battling the wind on my own like I usually would be in the classics, where I choose to have that disadvantage; the increased vibrations or that less amount of comfort. Because [when] I’m there [at the classics], I’m attacking, I’m trying to win the race, I prefer to have the faster bike there.

“But that’s not what it’s about for me on the mountain days. I’m always in a group, so even if there is a disadvantage in aerodynamics, it doesn’t affect me the same way as the riders that are up the road trying to win the race, because I’m in a group, or I’m going slow.”

According to Specialized, the Aethos frame weighs in at 215g lighter than a Tarmac in the same size, and given Asgreen’s Tarmac is already able to meet the 6.8kg limit, the Deceuninck-QuickStep mechanics have had to make some component changes to bring the weight up.

Asgreen confirms this gave him more freedom with component choice, where he has focussed on reducing the aerodynamic deficit and restoring familiarity.

“Because the frame is so light, I can put basically what I want on the bike and still reach the 6.8kg limit, maybe even having to add weight,” he explained.

“I’ve gone with the usual aero bar that I always ride on my Tarmac just to add a little bit of aerodynamics, but also mainly, mostly because of familiarity. I have my usual Phenom Pro saddle that I always ride. And then I will be mainly using the [Roval] Rapide wheels, the aero wheels. Also, again to offset that obvious aero disadvantage, but because the Rapides are significantly faster than the Alpinists in the way that I’m riding.

When asked if any other riders in the Deceuninck QuickStep team would be following the Dane’s lead, Asgreen confirmed that all of his teammates will continue aboard the Tarmac.

“For this Tour de France, I’ll be the only one. I think now it’s a bit of a test. We’ll see if I like it, and if the other riders in the team see the advantage in using that bike, maybe in the future, there’s going to be more riders on it.”

Today’s stage will see Asgreen and the peloton traverse 150.8km from Oyonnax to Le Grand Bornard. Five categorised climbs face the riders, with three category 1 climbs in the final 50km.

We check over 250 million products every day for the best prices
SOURCE: CyclingNews   (go to source)
AUTHOR: Josh Croxton
All copyrights for this article, including images, are reserved to the original source and/or creator(s).