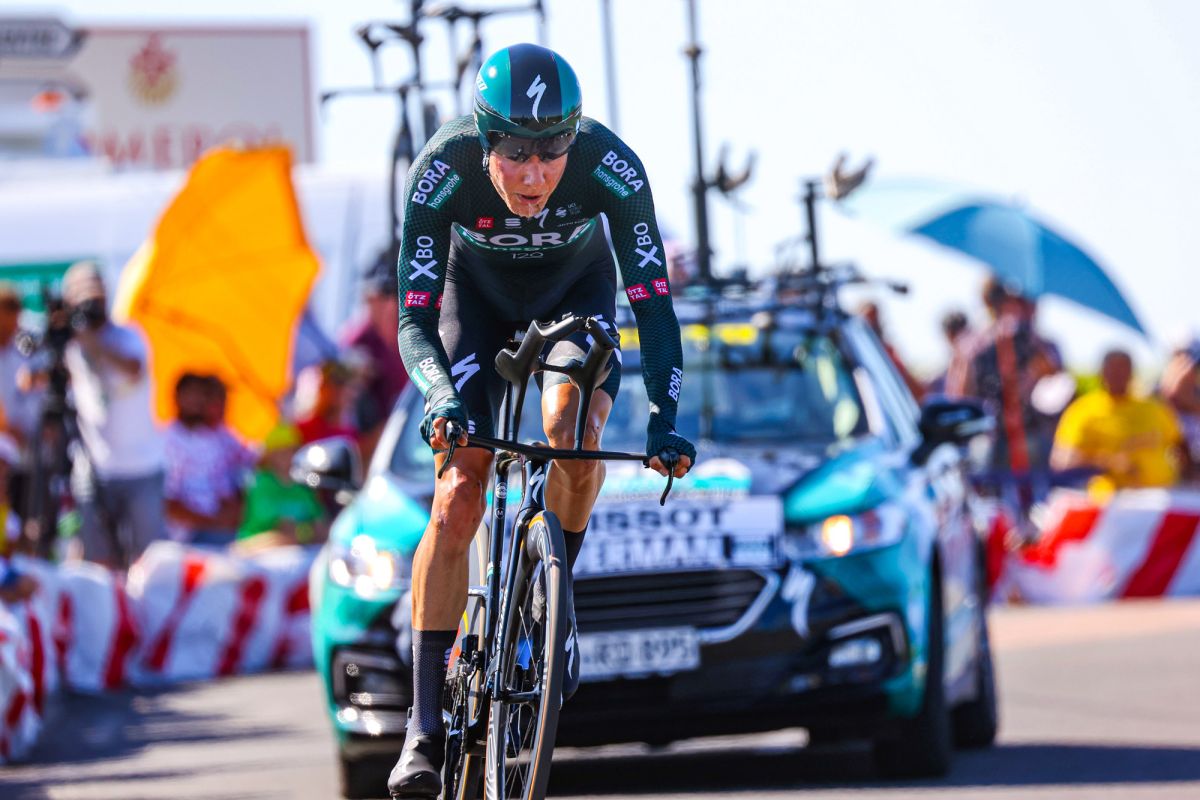 Wilco Kelderman’s attempts to claw enough time back during the stage 20 time trial to shift up to fourth place overall at the Tour de France may have failed but the Bora-Hansgrohe rider is content that he will be walking away from Sunday’s Paris finale having delivered the best performance possible.

Kelderman entered the penultimate stage of the race sitting in fifth position overall, just 32 seconds behind Ben O’Connor (AG2R Citroën) in fourth, and there was reason to think the time trial could work in Kelderman’s favour. He was quicker in the stage 5 race against the clock, gaining seven seconds on the Australian rider over the 27.2 kilometre course, however to close the gap he’d need to take back considerably more time and, with a 30.8 kilometre route this time, he only had an extra three kilometres to do it in.

“It was a tough course, bumpy, up and down, and a pretty normal day for me,” said Kelderman in a team statement. “Today, it wasn’t about setting a particular pace but rather about what you had left in your legs after three weeks of hard racing. Obviously, I aimed at edging up to 4th overall, so I’m a bit disappointed in that aspect, but also happy with 5th.”

Kelderman rolled off the start ramp two minutes ahead of O’Connor and while the Dutch rider delivered a solid time to finish 26th, 2:20 behind stage winner Wout van Aert’s (Jumbo-Visma) time of 35:53, as soon as the time checks from the Australian started coming in it looked unlikely that Kelderman had done enough to close the gap. O’Connor was even ahead in the first time check, though faded in the final stages which meant he finished with a slower time, but 21 seconds was not enough to cause a change in the overall standings.

“I’m 11 seconds behind O’Connor in the GC, which depending on one’s point of view, could be considered a small gap but I’m still behind him,” said Kelderman. “I knew it was going to be close because Ben wasn’t far behind in the first TT either. I gave it my absolute all and it’s the best I could have done today.”

Now Kelderman looks set to ride into Paris and across the final finish line on the Champs-Élyées in fifth, a GC result that means he has finished in the top five of all the Grand Tours. The 30 year old, who switched to Bora-Hansgrohe this year from Team Sunweb, finished third at the Giro d’Italia in 2020 and fourth at the Vuelta a España in 2017.

“It’s nice to have a nice GC position in the Giro and the Vuelta, but the Tour de France is the biggest race in the world and you want to have the best performance possible,” said Kelderman. “I achieved that and I feel happy and proud. I think we had a successful Tour de France and it’s a nice feeling for the riders and the team.”

The team entered the race with Kelderman leading the GC hopes and Sagan looking for stage victories and potentially even an eighth green jersey, however the three-time world champion crashed on stage 3 and left the race ahead of stage 12 with a knee injury, which he had surgery on following his departure. Nevertheless Bora-Hansgrohe have netted two stage victories to go along with the high GC place. Nils Politt took a win with a solo break on stage 12 and Patrick Konrad repeated the feat on stage 16.

“Wilco did a good TT, taking into consideration his crash yesterday. A number of times during the TT he wasn’t able to take the best aero position and didn’t ride as aggressively as we were hoping, hadn’t he suffered a crash,” said the team’s sports director Enrico Poitschke. “We are happy in that aspect, he’s very close to 4th overall, just 11 seconds behind, but we are satisfied with 5th.

“Tomorrow, we’ll have to be careful and avoid losing that place. Normally, the last stage is just a procession to Paris but you never know, you have to be focused. All in all, we’re happy with our GC position and our two stage wins.”