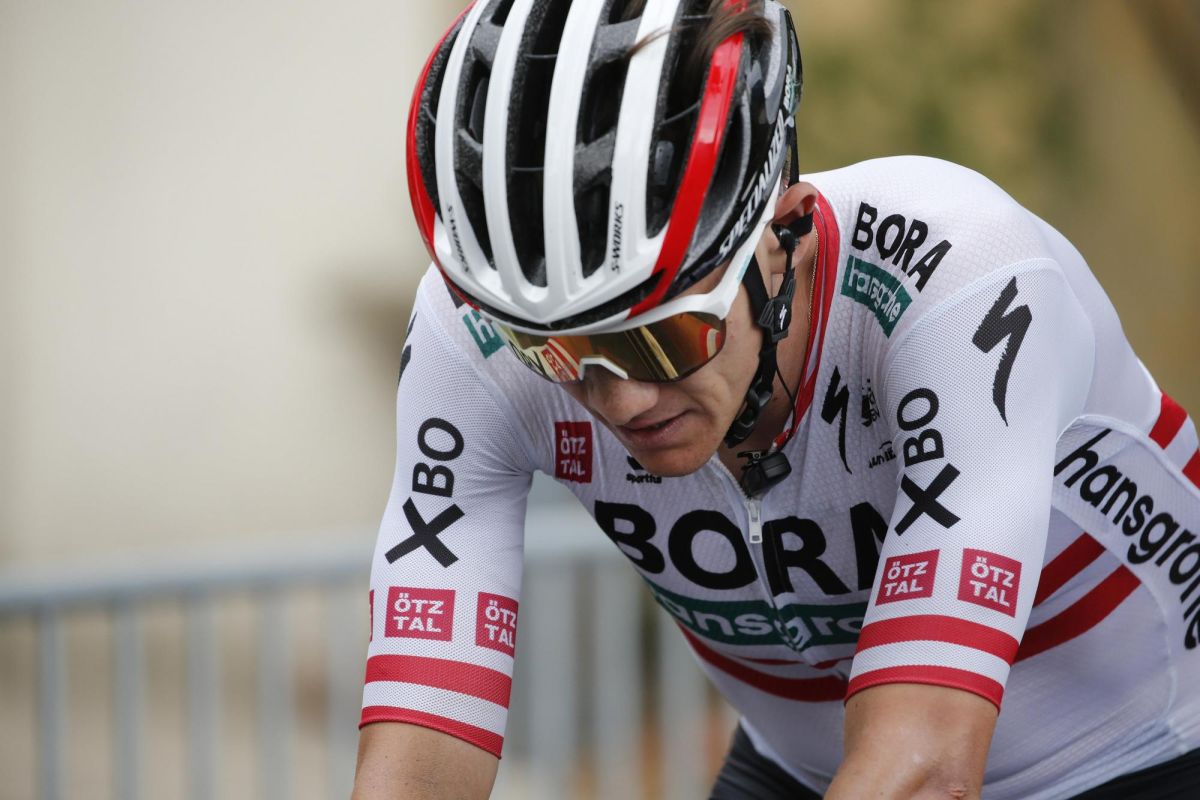 Patrick Konrad (Bora-Hansgrohe) saw his chance of taking a stage victory from the break disappear on stage 14 of the Tour de France as Bauke Mollema (Trek-Segafredo) took off on the sinuous roads of the Gorges de Saint George, with the impetus of the chase not helped by the fact that the growing gap to the eventual stage winner was cloaked by twist and turns.

While the size of the gap meant there was little chance of pulling back Mollema as the Quillan finish line at the foot of the Pyrenees approached the Austrian champion, however, made the most of the the remaining opportunity. Konrad took the close-run sprint for second place from Sergio Higuita (EF Education-Nippo).

“I can’t say I’m unhappy but I would certainly be happier if I were sprinting for victory,” Konrad said after the stage. “Mollema made a smart move, the road was twisting and we couldn’t see him. The climbs suited him today and he was strong. When he had a 30-second lead nobody wanted to chase him and it wasn’t up to me to do it.”

“With Guillaume Martin in the day’s breakaway, it was clear I wasn’t going to pull in that group,” said Konrad. ”He was 9 minutes back in the GC and I didn’t want to bring him earlier to the finish. I was sitting at the back of the break when Mollema attacked. I don’t know why nobody made the effort to follow him, I tried once but there was no rhythm any longer in the break.”

The Dutchman reached the final climb of the day, the Col de Saint-Louis – 4.7 kilometres at 7.4 per cent – with a  lead of 1:15. The chase ramped up the pace on the climb splitting the group and leaving four in pursuit, Konrad, Higuita, Michael Woods (Israel Start-Up Nation) and Mattia Cattaneo (Deceuninck-QuickStep). Still Mollema didn’t give up much time, coming over the crest of the climb, less than 20 kilometres from the line, with the lead having only dropped to just under a minute.

The Dutchman left himself time to soak in the victory, maintaining the gap to the line. When the group of four approached the finish a minute later it was Cattaneo who lead out the sprint, first shedding Woods and then himself fading to leave the battle over podium positions to Konrad and Higuita, with the Bora-Hansgrohe rider taking out the tight battle.

“We were surprised to see that the decisive move would be made downhill, Patrick missed it but afterward did a good race, was strong in the final climb, and took second on the line,” sports director Enrico Poitschke said. “It was a very good result.”

Woods and Cattaneo didn’t walk away empty handed with the Canadian stepping into the polka-dot jersey and Cattaneo shifting up one position on the overall to tenth. Martin came in with the next group, taking 11th but more significantly finishing well over five minutes ahead of the peloton containing the rest of the GC top ten. That meant he jumped to second overall, displacing all the riders ahead on the GC except race leader Tadej Pogačar (UAE Team Emirates). Konrad’s teammate Kelderman now sits in seventh place.