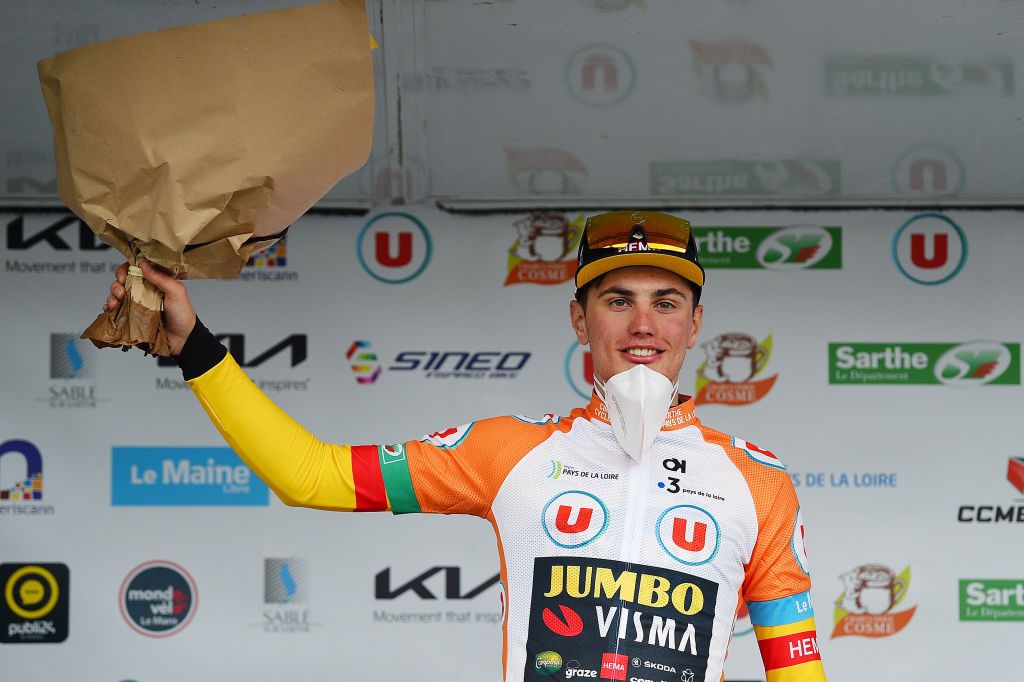 Shall people still wonder why Jumbo-Visma let Dylan Groenewegen go to Team BikeExchange-Jayco at the 11th hour last year? It’s not only because there’s very few spaces left for a top sprinter and his train alongside GC riders like Primož Roglič and Tom Dumoulin, but also because the Dutch squad already has the next big thing to come, apparently.

Olav Kooij, 20, claimed his first victory of the 2022 season in stage 2 of Circuit de la Sarthe in Le Lude. It’s not his first career pro win, as he imposed himself in stage 1a of the Settimana Coppi & Bartali in September 2020 and took two stages of the 2021 Cro Race, also at the UCI 2.1 level.

Last season he added a third place at the prestigious Gran Piemonte in Italy. This year, he finished second to Jasper Philipsen in stage 5 of the UAE Tour and second to Tim Merlier in stage 2 of Tirreno-Adriatico.

“I’ve been close a few times this year already with a few second and third places but I wanted to win and I’m very happy that I managed to win today,” Kooij told Cycling News in Le Lude. “It’s kind of a relief. It’s always nice to beat really good riders. This week, there’s quite a strong start field so it feels very good to win against them.

“We managed to stick together till the last 2km and we moved to the front”, he described. “From there it was narrow so it made it possible for us to stay in the front. I need to thank the guys for that. They stayed very calm and helped me to get to the front. Then I was in a good position at the last corner, so I knew I could sprint.

“We’re here with a very young team including some guys from the development team. It’s hard to fight against the strongest teams. They do all they and I try to find my way with them, sometimes I need to do something extra myself but they’re very motivated young riders. It’s nice to be with a group of enthusiastic young guys.”

Kooij showed his top-end speed as he overhauled race leader Pedersen, who looked like he would secure a second straight victory. Elia Viviani and Mark Cavendish of QuickStep-AlphaVinyl made the top 10 but were not close to the young Dutchman.

“It’s my ambition to get to the top of sprinting but I don’t know if I’m one of the best sprinters yet”, Kooij said. “For that, I need to win a lot. This is a nice start. Sprinting is the way I can win races so that’s my focus at the moment. We’ll see how I develop and if I can for harder races in the future.”

There is no Grand Tour is on his agenda yet but he’ll get there eventually.

“After Circuit de la Sarthe, I’ll take it easy for a few weeks and I’ll resume racing with the Tour of Hungary,” he concluded. “Tour de Suisse should be my biggest stage race this year and also the hardest I think.”

SOURCE: CyclingNews   (go to source)
AUTHOR: Jeff Quénet
All copyrights for this article, including images, are reserved to the original source and/or creator(s).