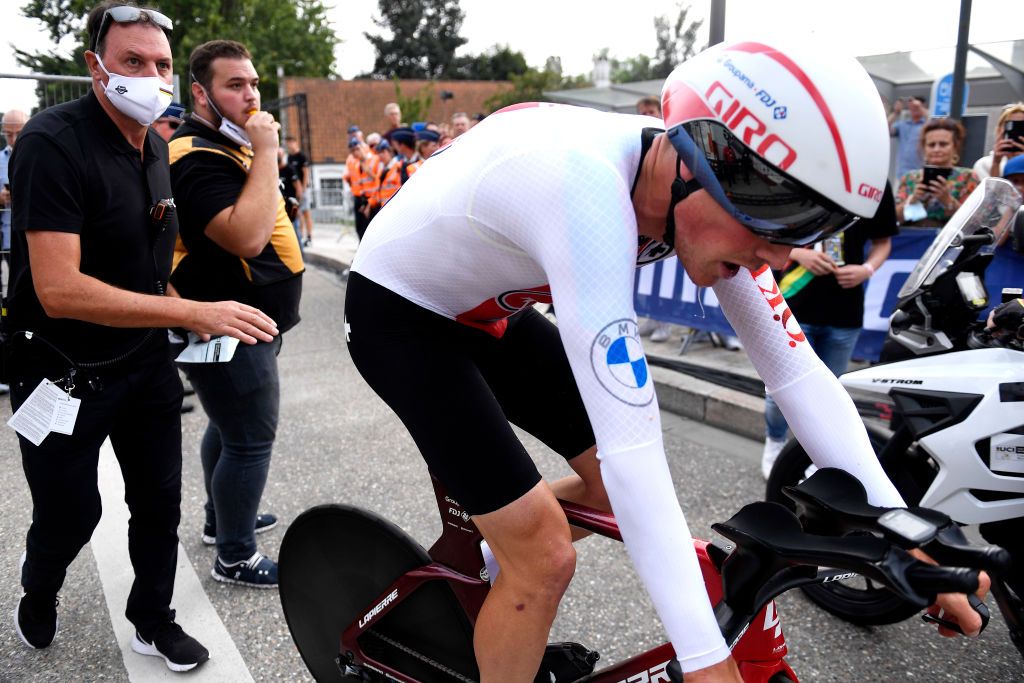 Stefan Küng looked shell-shocked as he wheeled into the media zone upon finishing his time trial at the World Championships in Flanders. The Swiss rider sat stone-faced on his bike, staring blankly at a television screen as it told him just how far he was from the gold medal he’d so craved.

Küng had been widely tipped as a bona fide favourite for Sunday’s 43.3km race, and with confidence sky-high following his capture of the European title last weekend, he believed in it, himself.

He’d beaten the 2020 World Champion Filippo Ganna (Italy) that day, but in Bruges he found himself down in fifth place, some 67 seconds off the repeat world champion, and 23 seconds off the podium.

Küng was at a loss to explain the crushing nature of the defeat. “The others were obviously better today,” was the refrain for which he repeatedly reached.

He’d have preferred a little more undulation and a few more corners, but he felt like he gave a good account of himself. He was in the mix early on as he went third fastest through the first intermediate checkpoint at kilometre 14, but by the second checkpoint he was behind not only Ganna and Wout van Aert (Belgium) but also Remco Evenepoel (Belgium) and Kasper Asgreen (Denmark).

“When I heard with 15km to go that I was behind Remco and Asgreen, it was kind of a surprise to me,” Küng said. “I tried to stay calm and push on, but unfortunately I couldn’t take any time back.

“It’s not that I was really close to the medals. Congrats to the other riders, but right now I really don’t know what I could have done better today. It’s not that I did a mistake or something. We will look at it once the dust has settled. It’s not that’s it’s a disastrous performance, but it’s just not what I wanted.”

Küng went on to make one comment that really stood out: “Once again, I came up short.”

After winning the European title and claiming bronze at Worlds in 2020, the 27-year-old has had a season of big strides and near misses, which might explain his mixed feelings in Bruges.

He won time trials in Valencia and the Tour de Suisse, as well as recapturing the Swiss and European titles, but he has had to settle for the lower steps of the podium at Tirreno-Adriatico, Benelux Tour, and the Tour de France. At the Olympic Games, he missed the bronze medal by a fraction of a second, and now at Worlds, so soon after that European glory, he was back off the podium completely.

“Today kind of reflects my whole season,” he said. “I was always up there in the important time trials of the year, always in the top five. I’ve been really consistent, it’s just that some days someone else has a really good day – like Tadej Pogačar at the Tour [on stage 5]. That was the only time he beat me all year.

“I was only able to beat everyone once, at Euros. That was really nice but I really had big goal today and wanted to fight for the world title.”

That said, the sense of shock and disappointment seemed to wear off the longer Küng spoke.

He may have fallen short in some big moments but, after showing flashes of his potential at BMC, he has established himself as a consistent force in the top echelon in his third year at Groupama-FDJ, and senses there’s room for improvement.

“We are athletes, we want to win, and when you come up short it’s a bit of a disappointment, but if I look overall, it’s not a disappointing season. It’s the other way around. I will take good things out of this season. I really know how to perform on the day and prepare,” he said.

“I won’t stop working,” he added. “My big goal is top be on the top step one day and I will keep fighting for that. I know I can be up there with best guys in the world on every parlours. One day it will work out.”