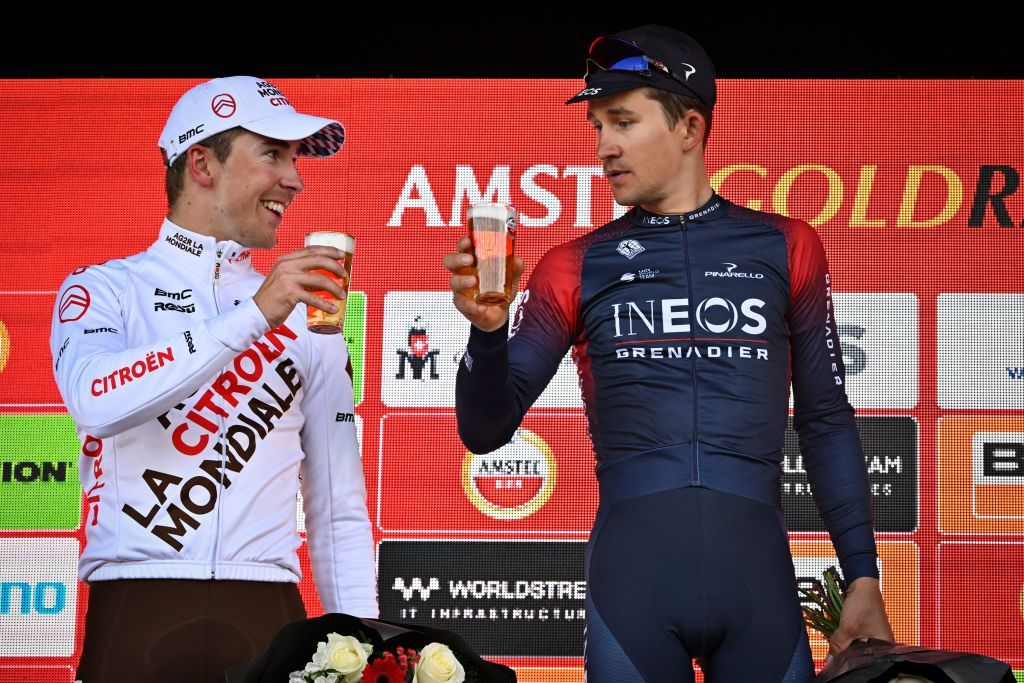 For the second year in a row, the unspectacular suburban road of Rijksweg produced a spectacular, scarcely believable finish to the Amstel Gold Race.

As with the 2021 race, it was an Ineos Grenadiers rider who was involved in a controversial photo finish at the Limburg race, this time Michał Kwiatkowski coming out on top in contrast to Tom Pidcock’s achingly close defeat a year ago.

The Pole had looked to edge the sprint on the line against fellow late escapee Benoît Cosnefroy, before the AG2R Citroën riders and his team burst into celebration past the finish line moments later. That joy would be short-lived, though, with official confirmation showing that the Frenchman had lost out by depth of a Dura-Ace C50 rim.

While Cosnefroy had run the gamut of emotions after the finish and come out on the wrong side, for Kwiatkowski it was the opposite. Speaking after the race, he said he had thought he’d lost when he saw the AG2R team celebrating. He suggested that the confusion might have been down to an AG2R directeur sportif.

“It might be his DS actually,” Kwiatkowski said in the post-race press conference. “They were kind of celebrating the victory already, but I wasn’t sure that it’s the official announcement.

“Seeing your rival celebrating already, I was pretty sure that I had lost it. Then all of a sudden, a person from the organisation said, ‘oh you won’. I thought he was joking. It’s a rollercoaster of emotion to be honest. It’s good to be on that side.”

Kwiatkowski said that he didn’t want to compare the situation to last year’s race, where Wout van Aert beat Pidcock by millimetres. He did, however, note that the 2021 race – as well as the 2017 Milan-San Remo, where he barely beat Peter Sagan and Julian Alaphilippe in a three-man photo finish – had taught him to be patient on Sunday.

“Life and last year’s situation with Tom [Pidcock] and Van Aert teach us that you have to be patient with thinking about who won. At the end of the day the photo finish will decide,” he said.

“My personal feeling was that I had lost because you kind of on the finish line you don’t think where you are, you just do the maximum effort and you just kind of realise after the finish line that I was a bit faster than him. But at the end of the day, I didn’t know.

“It was a very similar situation in Milan-San Remo in 2017. It was super close, and we were also waiting there for a couple of minutes before they announced the winner. The I’m lucky again with the photo finish so that was great.”

Kwiatkowski found himself in a unique situation once the decisive split came about on the Keutenberg, climb 30 of 33 during the 254km race. While the likes of Cosnefroy, Mathieu van der Poel, Tiesj Benoot, and Kasper Asgreen were the sole representatives of their teams, he could rely on Pidcock to help out.

Following Ineos Grenadiers’ work earlier in the race, the 22-year-old put in an attack over the final ascent of the Cauberg 10km later, a move which, when caught, saw Kwiatkowski jump away on the start-finish straight with 22km to go. That was the winning attack, and when Cosnefroy got across soon afterwards, Kwiatkowski was able to sit in the wheel more than he might’ve otherwise – thanks to Pidcock’s presence behind.

“Being there with Cosnefroy, I had to let him do most of the work because we knew that we did most of the work as a team today,” Kwiatkowski said. “Having Tom in the front group, having the numbers at the right time. We had the comfort of letting the others do most of the job. Cosnefroy had the responsibility of maintaining that gap.

“I was there to secure the win for the team. I knew there was a headwind at the finish line, so I really launched my sprint quite late, maybe too late. So, when I found myself next to him, I think he had something left in the tank so that surprised me and I just came on the right kind of late. I threw my bike.

“When they said I had lost, I was super sad because the team rode amazing today and for us it was all about winning the race. Then a couple of minutes later they announced that the photo finish showed that I won. That was pure happiness and super emotional for me.”

That emotion didn’t only stem from the dramatic nature of his victory, though, nor from the work his team had committed to doing for him and Pidcock through the race. Rather, the result was his first victory since September 2020 at the tour de France and had marked the culmination of a tough spring beset by illness, Kwiatkowski said.

“For me it’s all about what happened yesterday and in the previous weeks at the moment. And if I look through that period, it was just a very difficult start of the season for me. This is a new season, 2022, and I only look through that period, which for me was a super difficult start of the season, having COVID-19 in February and recently having flu.

“So as a result, I wasn’t able to perform in the races. Just being here as winner in Amstel Gold Race for me is super emotional because I went through a very difficult period. My family was sick, I was sick, and it was very tough. I just want to say thank you to the team because even with that difficult period I was one of the leaders today. They really believed in me, and it was just great to finish it off like that.

“It’s just good to be back as a winner of the race after all the difficult moments that I had this season.”