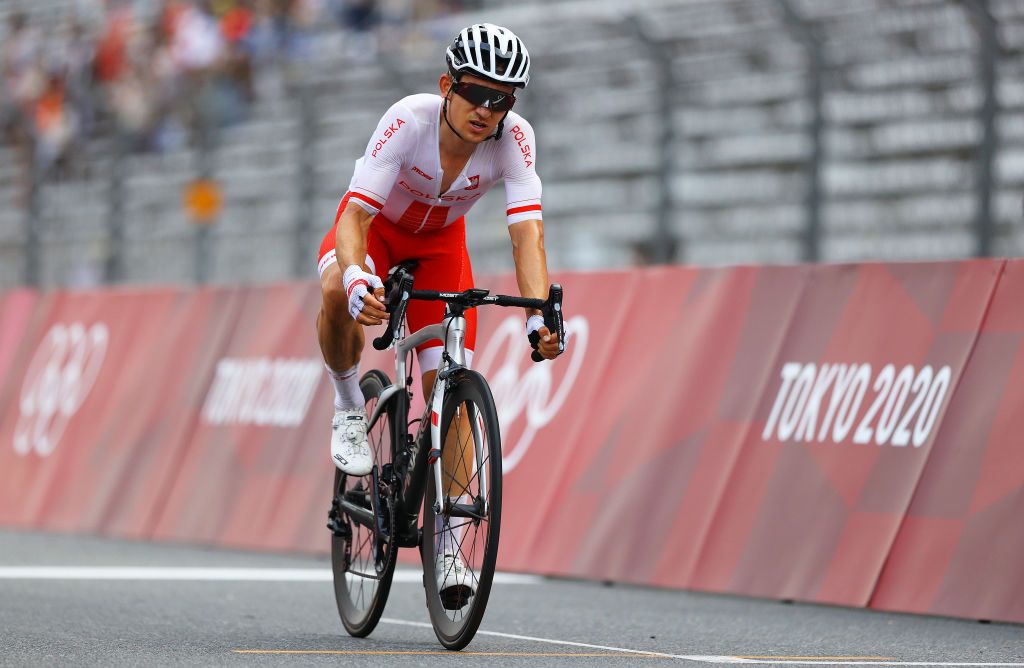 Michal Kwiatkowski (Ineos Grenadiers) will lead the line for Poland at the UCI Road World Championships in Belgium later this month, with the 2014 winner hoping that his experience and mental strength will be just as vital as on-bike power.

The 2014 world champion has had a long season and, although he has yet to pick up an individual win, the 31-year-old has been ever-present and consistent on several fronts, including the Tour de France and the Spring Classics.

Although he is not an out-and-out favourite for the men’s road race in Belgium on September 26, the Polish leader is using the Tour of Britain to build up his form.

“It’s been a long season and they say almost every race suits me but at the Worlds it’s all about having it on the day and the conditions,” Kwiatkowski told Cycling News.

“I’ll be super motivated to have a good race but I need to make sure that things are right at this race and then see if have the kick and the energy to perform. This has been a long year and I’ve not had a lot of breaks but I’m still motivated to end things in the right way with the World Championships and then the last race of the year for me with Paris-Roubaix.”

Since the Tour de France, the all-rounder has barely had a chance to take his foot off the gas. He went to the Olympic Games in Tokyo, where he finished 11th, and then dovetailed his time between racing the Tour de Pologne and being at home with his six-week-old daughter.

“There was no time to take a big break this year and my daughter is now six weeks old, so it’s been a nice period for me but it’s also taken a lot of energy. I’m just trying to finish well. Here at the Tour of Britain, I’m here to get through and to build up some race kilometers. I’ll see how it goes,” he said.

So far, Kwiatkowski has played a pivotal role in the Tour of Britain for Ineos Grenadiers. He helped the team to victory in the stage 3 team time trial in Wales and then expertly led out for Ethan Hayter’s fine stage win two days later.

After the Tour of Britain, all attention will turn to Belgium and, although Kwiatkowski has not taken part in any recent reconnaissance trips, he is familiar with the route, with the course baring a resemblance to the routes of De Brabantse Pijl, where Kwiatkowski was sixth in 2020.

“I’ve been in the area but to be honest I’ve not done the recon that the other guys did around Amstel Gold Race this year. I’ll be there early enough to see it, though, and I know some of the parcours from Brabantse Pijl but there’s nothing too much to worry about. I know what I have to know at this point.”

At this point in the season, Kwiatkowski isn’t the only top-level athlete attempting to manage their efforts before winter hibernation sets in. This has been the first full road campaign since the global pandemic and riders are tired after a long and intense campaign.

According to the experienced Pole, the winner in Belgium will be an athlete who combines excellent form with mental freshness after such an arduous season.

“Wearing the national jersey always gives you extra motivation and it’s a classic race so I’ll do everything possible to be ready and motivated for that day. I’ve got to be concentrating for 260km, and it’s going to be a really tough race. It’s going to be so demanding, so the head must be strong, especially at this part of the season,” he said.

Kwiatkowski, despite his win in 2014 and fourth place in 2020, doesn’t see himself as a leading favourite and, as such, doesn’t expect his team to control or take responsibility for the men’s road race. That element will surely play into the Polish rider’s hands.

“It will be difficult to fight against Wout van Aert and the many other riders who are flying this year but hopefully I can be up in the game and hunting for the medals,” he said.

“So far there are many bigger favourites than myself. That’s a situation that can be good or not but it depends on the scenario of the race. Guys at the front will always look at each other but you also need to read the race. It will be up to others to make the race and control the tempo, and it won’t be up to me to decide what to do.”