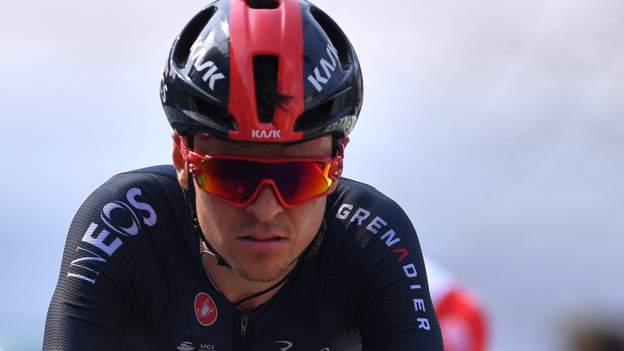 The Deceuninck-Quick Step rider powered past Jumbo-Visma’s Primoz Roglic on the Belgian one-day race’s famous climb up Mur de Huy to the finish.

Pidcock was a race favourite after just missing out at Amstel Gold on Sunday.

UAE-Team Emirates were prevented from racing after two team members tested positive for coronavirus, despite the team’s vaccination programme.

British rider Pidcock faded on the Mur after battling at the front of the lead group, finishing behind Movistar’s Alejandro Valverde, who was third, Israel Start Up Nation’s Michael Woods fourth and Warren Barguil of Arkea-Samsic fifth.

In a star-studded Ineos line-up, Adam Yates finished 20th, 27 seconds down, with Giro d’Italia winner Tao Geoghegan Hart playing a supporting role – including helping Pidcock recover back to the peloton after a crash with 27km to go.

UAE’s Italian Diego Ulissi and a staff member tested positive on Tuesday but have since provided three negative tests.

The staff member had been vaccinated in January after a UAE-based “collective” inoculation programme was offered.

Ulissi missed his team’s vaccination programme in January because he was not at the training camp.

“The team is frustrated but accepts the final decision,” said a statement.

“Since the original ‘positive’ test, both members have undergone three separate tests each. All the results from these subsequent tests returned negative results and neither displays any symptoms.”

Among the UAE-Team Emirates riders missing the race was Tour de France winner Tadej Pogacar. The 22-year-old was another of the favourites for the 194km ‘semi-classic’ race.

The Netherlands’ Anna van der Breggen of SD Worx, the women’s road race world champion, earlier won the women’s La Fleche Wallonne for the seventh and final time in a row in her illustrious career.