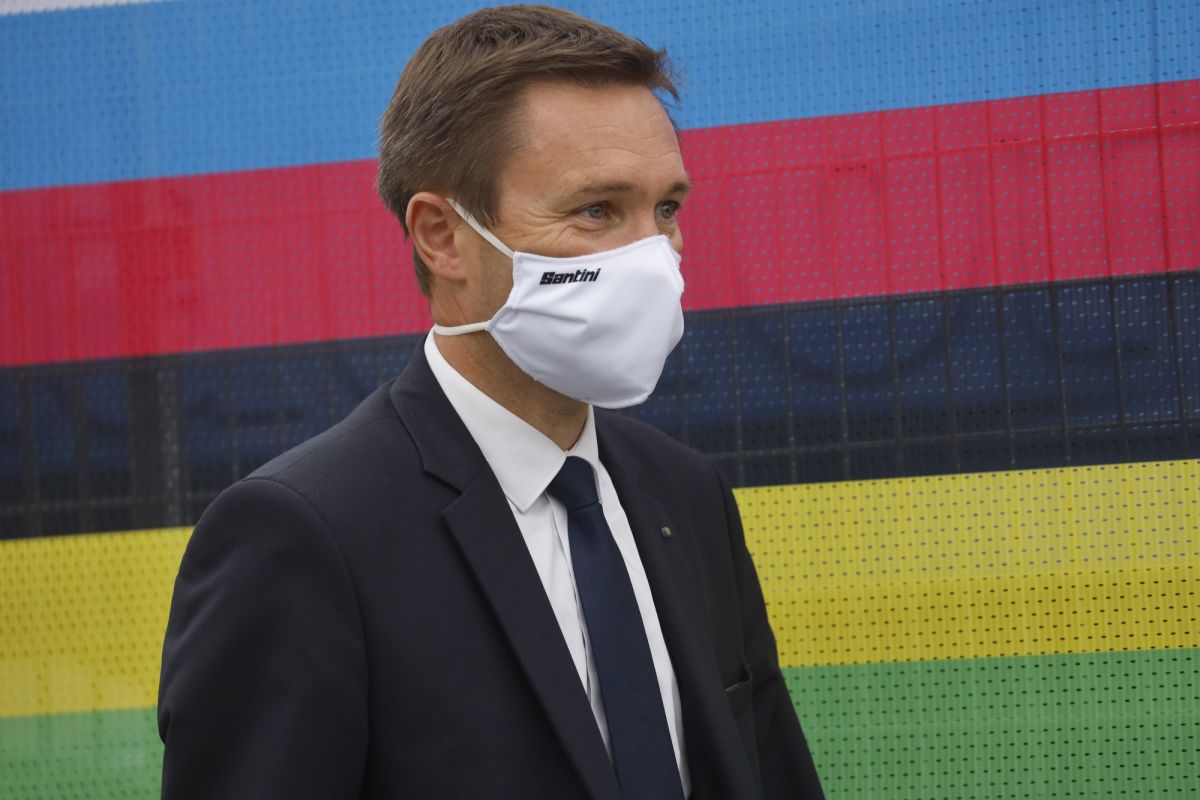 UCI president David Lappartient has defended the decision to grant the 2025 Road World Championships to Rwanda, in face of human rights concerns. The president of the Rwandan cycling federation, meanwhile, has insisted that ‘sport and politics cannot be mixed’.

A couple of days after the cat was let out of the bag, Rwanda was officially confirmed and announced as the host for the 2025 Road Worlds during the UCI Congress at the 2021 Worlds in Belgium on Friday.

The premature announcement from the Rwandan federation earlier in the week, however, had already sparked a debate over human rights and sportswashing. Various human rights organisations have highlighted shortcomings in the central African country, with Amnesty International referring to “reports of enforced disappearances, arbitrary detention, excessive use of force, unfair trials, and restrictions on the right to freedom of expression.”

The Worlds announcement comes in the same week that Rwanda made global headlines as Paul Rusesabagina, who inspired the film Hotel Rwanda and has been critical of Paul Kagame’s regime, was arrested on terrorism charges after a controversial arrest and trial. Referring to Rwanda’s sponsorship of Arsenal football club, Rusesabagina’s daughter told ITV this week: “Out of respect for human rights, out of respect for justice, out of respect for the future of humanity, then a sports club like Arsenal should not take money from a dictator like Paul Kagame.”

Cycling News was present at the UCI congress to ask Lappartient whether he shared the concerns about awarding a major international event to a country with a questionable human rights record.

“I’ve always said that the subject of human rights is always a major one for us,” he said. “But I was able to go to Rwanda, I met many Rwandans, and what I saw is a government that has come through a very complicated crisis and has been able now to unite people.

“When you look at where Rwanda has come from, and where it is now, I think that can only be achieved with true leadership. Sometimes, we shouldn’t look at all the world’s governments through the prism of our strictly European way of doing things. I sincerely believe there is strong support for the authorities in Rwanda, for what they’ve done in terms of health, in terms of cohesion.”

Rwanda is governed by Paul Kagame, who was last elected in 2017 with 99 per cent of the vote. He is by all accounts a divisive figure, with some praising the stability and development he has overseen, notably since the 1994 genocide, while others see a political despot.

“Over there, there are, of course certain elements,” Lappartient said, before adding: “I don’t know if a perfect democracy exists anywhere in the world.

“But what I see in Rwanda is a people who know how to get back up, a people who suffered 800,000 deaths in 1994 during the genocide. To overcome that, to reunite the country, that’s not easy. There is a man who’s a visionary, who has been able to do it. I also note that the president of France went recently to meet Paul Kagame. He was elected president of the African Union. So all that is to say is that this is a country that is recognised on the international scene. Naturally, each country can do better in terms of human rights. I think already a lot has been done. Sport has the virtue of giving people shared experiences and the World Championships is without doubt a way to continue to reconcile Rwanda’s people.”

The World Championships in Rwanda is set to intensify the allegations of sportswashing – or buying into sport with goal of reputational repair or international legitimisation. Those concerns have already been repeatedly aired since the country’s tourism body began sponsoring Arsenal in 2018. There have been questions as to how and why a notably poor country that relies heavily on foreign aid should be shelling out millions of pounds on a shirt sponsorship, although the counter-argument is that Rwanda has reported a direct uptick in tourism and thus a knock-on economic boost.

However, as Rwanda prepares to pay its licensing fee for hosting the Worlds, thought to be in the region of £6m, and then at least £10m more to organist the event itself, the sport-washing allegations will resurface. Murenzi Abdallah, president of the Rwandan Cycling Federation was also on hand at the congress to respond to such concerns.

“These are things you cannot mix, because sport is sport and politics is politics,” he insisted.

“Those who say there is a problem with human rights… then can say what they like but in Rwanda everyone is safe, everyone is good, whether it’s Rwandans or foreigners. Look how many tourists come to Rwanda. On a political level, we’re good. President Macron was in Rwanda recently. We have a good relationship with everyone, with other counties, with the USA. But we are focusing on sport.”

The UCI has faced these accusations in the past, notably when Qatar was chosen as the host for the 2016 Road World Championships, while human rights concerns have been raised around several team’s in the UCI’s WorldTour series, such as Bahrain Victorious and UAE Team Emirates. Whereas Qatar has little cycling culture and the 2016 racing took places on largely deserted roads, what’s in little doubt is Rwanda’s appetite for cycling. The crowds at the Tour du Rwanda each year are a testament to that and are something that Lappartient feels will make the 2025 Worlds a success.

“Clearly there is a fervour there. We’re certain that when we go to Rwanda, it’ll be maybe a million spectators that we’ll have at the roadside. It’s going to be absolutely fabulous. We can promise enthusiasm that people have perhaps never seen,” he said.

“We wanted the 2025 Worlds to be in Africa, so we did not accept candidates from anywhere else,” he added, referring to the battle between Rwanda and Morocco for hosting rights. “The Worlds were created in 1921 and have never been in Africa. Today we ratified two new African federations so we now have 54 members in Africa of 54 countries officially recognised in Africa, and so it was right that we repaid Africa for its great investment in cycling. We had two good candidates but Rwanda satisfied our criteria, be it organisation, financial, and sporting. Also, with the passion Rwanda has for cycling, there was unanimity between the committee.”

Abdallah added: “This represents something big. The first time in Africa. It’s one of most famous events in world sport. For Rwanda it’s an opportunity to show we love cycling and that we can organise big events like the World Championships.”