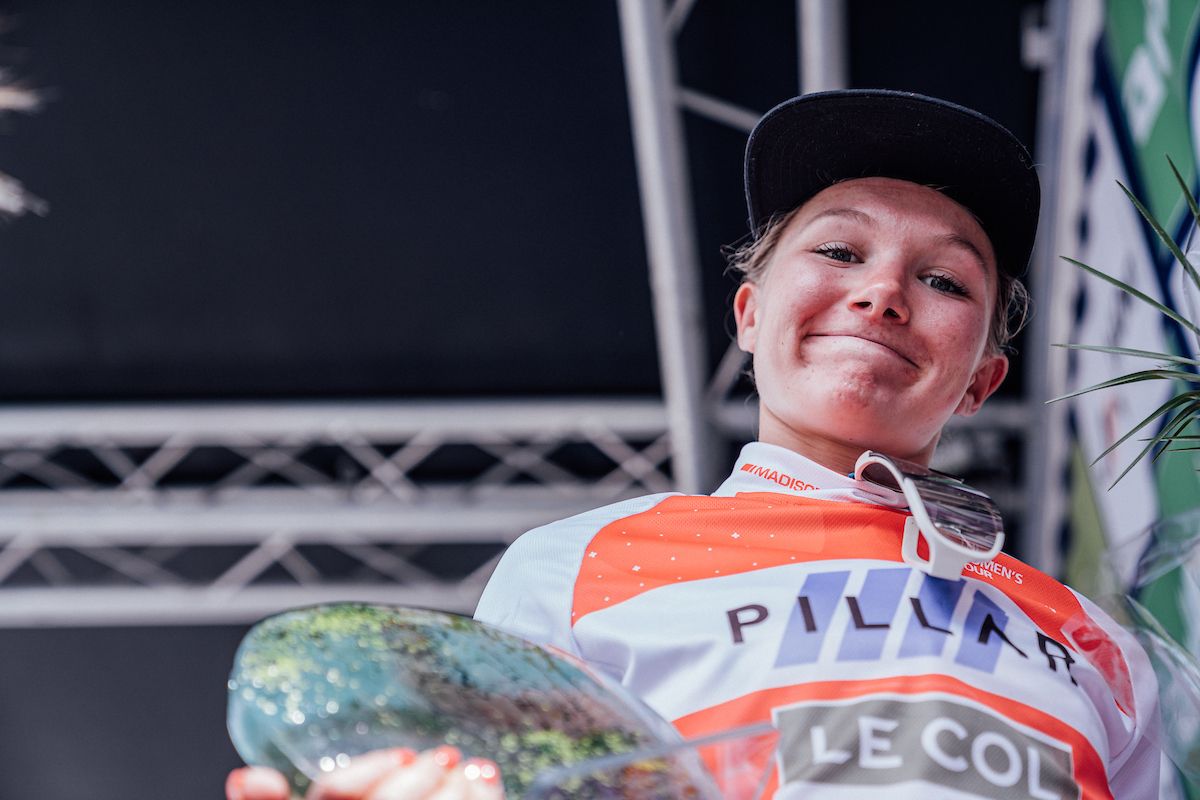 For British team Le Col-Wahoo, the Women’s Tour is one of the main goals of the season and they are playing an active role in the hunt for a top GC place and for the special classification jerseys.

On stage 2 into Harlow the team took a three-pronged approach with Marjolein van’t Geloof as their protected rider for the sprint finish – eventually finishing in fourth place – while Maike van der Duin and Gladys Verhulst had carte blanche to go for the intermediate sprints and QOM sprints, maintaining van der Duin’s lead in the red sprint jersey as well as chasing the yellow leader’s jersey and green mountains jersey.

On the previous day’s opening stage, Van der Duin won both intermediate sprints and received the red sprints jersey for her efforts. But she was also a threat to the yellow leader’s jersey as the accompanying bonus seconds put the 20-year-old Dutchwoman in third place overall, four seconds behind stage 1 winner Clara Copponi (FDJ Nouvelle-Aquitaine Futuroscope).

“On stage 1, it was not the main goal to go for the sprints, but we were there and just went for it. And then I had the sprint jersey and was also in the GC, so it became one of our main goals. We made a plan that we really want to go for it because it’s a really good situation for the GC and in the best scenario I could become the leader,” Van der Duin said ahead of the second stage.

Van der Duin won the first intermediate sprint on Tuesday while Copponi finished third, narrowing the gap to only two seconds – but in the second intermediate sprint, Copponi beat the young Dutchwoman, taking back one second. Van der Duin is now second overall, three seconds behind the yellow jersey, but has a comfortable lead in the sprints classification where she has 11 points to Copponi’s four.

Van der Duin’s priority on the coming stages will be to defend the red sprints jersey: “Our main goal is to protect our leader so that she’s safe and in the best position, but we have the jersey so we will go for it the same way as on the two days before,” she said.

And as the race goes on, Van der Duin faces a new experience – the Women’s Tour is her first six-day stage race – and she has only done three-day stage races so far. Wearing the red sprints jersey gives her extra motivation.

“It’s really nice to be in this situation. We have a good team spirit. I really like it and I am looking forward to the next days. I am not thinking about it being my first big stage race, we will see how it goes in the end, but the jersey is a nice goal for the week,” she said.

On the hillier side of things, Gladys Verhulst had featured in the QOM sprints on the first day of racing, collecting three QOM points. In the final 20 kilometres of stage 2, Toot Hill and Stonards Hill offered her two opportunities to go for the green QOM jersey that was on the shoulders of Christine Majerus (SD Worx) after stage 1.

Verhulst was positioned well on Toot Hill and could take the maximum four points, beating Elise Chabbey (Canyon-SRAM) and Majerus, then found herself off the front of the race.

“I got on the Canyon train ahead of the QOM sprint. When Majerus started, I got in her wheel, and then I started the sprint,” said Verhulst. “At the top, I saw that there was a small gap, so I just went for it,” the Frenchwoman said.

Verhulst quickly got a breakaway companion as Lily Williams (Human Powered Health) attacked from the peloton after the hill.

“The girl from Human Powered Health joined me a few moments later, and we went as far as possible together. I hadn’t thought about winning the stage, I take things as they come,” said Verhulst.

She put another four QOM points under her belt by winning the second QOM sprint, but Majerus led the peloton over the hill, collecting two QOM points in the process and defending her jersey by on point: Majerus now has 12 points while Verhulst has 11.

Their fight for the green QOM jersey will continue on Wednesday’s stage 3 from Tewkesbury to Gloucester that features two second-category hills before the stakes are upped even more on two stages through Wales.