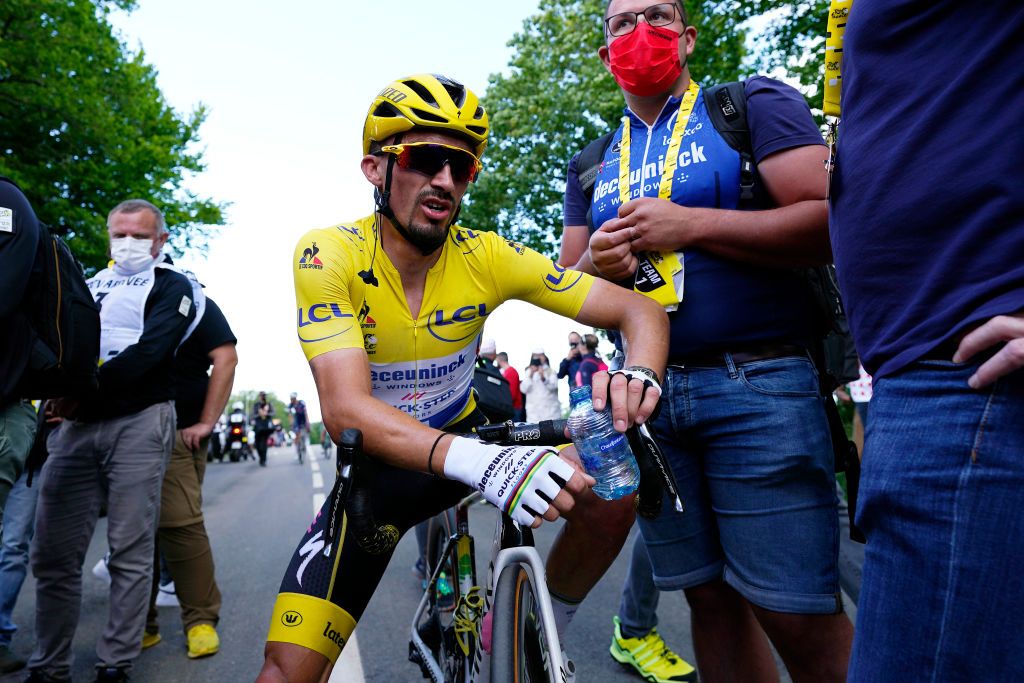 After being injured in a crash at Liège-Bastogne-Liège, Julian Alaphilippe is facing a battle against time to compete in the Tour de France, according to his QuickStep-AlphaVinyl team manager Patrick Lefevere.

Writing in his blog on Het Nieuwsblad, Lefevere emphasised the importance of the Frenchman’s participation in the Tour de France but added that Liège-Bastogne-Liège winner Remco Evenepoel will “definitely not” be a replacement for Alaphilippe.

“The big question is whether Julian will be there when the Tour starts here in Denmark. We will do everything we can, but it will be a race against time,” Lefevere wrote. “If, in the most favorable case, he is back on his bike in mid-May, he still has six weeks. The Tour starts on Friday 1 July, a week earlier than usual. That is of course not an advantage.”

Alaphilippe was taken down in a chain-reaction crash that also wiped out teammate Ilan Van Wilder, who was due to race the Giro d’Italia but is now out with a broken jaw.

Lefevere blamed the crash on ego and “one rider not wanting to brake for another”. Romain Bardet (Team DSM), who stopped to help Alaphilippe after the crash, blamed the wreck on a collision between Tom Pidcock (Ineos Grenadiers) and Jérémy Cabot (TotalEnergies).

“Ilan Van Wilder called it rooster behavior and he is right. The balance for us is bad: Ilan has a broken jawbone and misses the Giro. Julian has to recover from a collapsed lung, a broken shoulder blade and two broken ribs, which have also been displaced. He’s not allowed to move for three weeks, which is agony for him,” Lefevere said. “He will initially recover with his family in Ronse. He is not allowed to fly in his condition.”

Alaphilippe led the 2019 Tour de France for 16 days, three in 2020 and after winning the first stage in 2021 in Landerneau. He is an important facet of the Belgian team’s plans for the Tour.

“A Tour with or without Alaphilippe makes a big difference, commercially and sportingly. What we are definitely not going to do is use Remco Evenepoel as a stand-in. As he himself indicated in Extra Time Koers [a Belgian television programme – ed]: we will stick to his schedule. Not [racing] Tour, but the Vuelta.”

Lefevere described the contradictory emotions of having two riders in the hospital while celebrating Evenepoel winning Liège.

“You think of the two riders who were transferred to the hospital in Herentals, seriously injured. That is particularly difficult: the parents and girlfriend of Ilan Van Wilder were in the hotel, badly shaken of course. They see me standing with champagne and toast in my hand. Very uncomfortable.

“You experience that contradiction more often in the race. I remember the Tour of 2015. Zdenek Stybar won the [Tour de France] stage in Le Havre, but in the same stage Tony Martin had to give up with a broken collarbone while in the yellow jersey. Then you don’t know in the evening whether you are uncorking the champagne to celebrate or to drown your sorrows.

“These are moments that always bring me back to the birth of my first son, the most intense day of my life. At four o’clock in one clinic my father died, at eight o’clock in the other clinic my son was born. You yourself don’t know what to feel, let alone that people know what to say to you. That day marked me for the rest of my life,” Lefevere continued.

“It helps to keep perspective. To know what is really important and what is not. And so never to panic even in a difficult spring.”