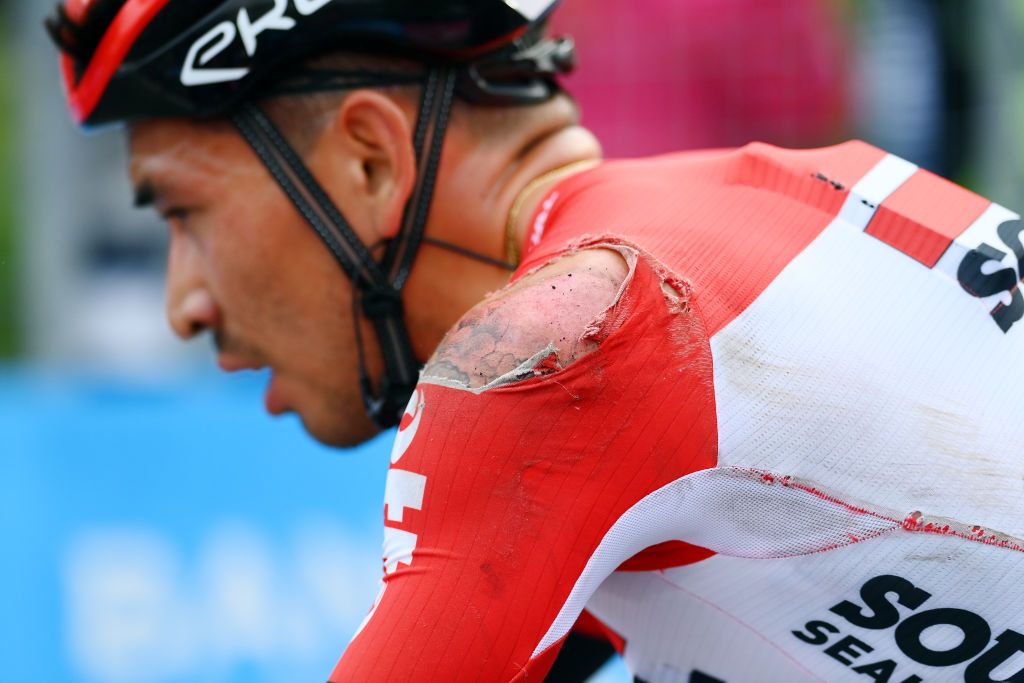 As the finale of stage 1 of the 2022 edition of the Giro d’Italia was playing out with a hilltop finish in Hungary the bulk of the sprinters were more than a minute back. The final climb was too much of an ask for most, but not for Caleb Ewan.

The Australian Lotto Soudal rider was up the front with a group of three, sitting behind Mathieu van der Poel (Alpecin Fenix) and Biniam Girmay (Intermarché-Wanty-Gobert) and looking ready to strike.

“Even if everybody at the beginning said that it was not the stage for a sprinter, we were convinced, we did the recon and everything. And we are going into this Giro with a lot of ambition, not on the GC but on stages,” Lotto Soudal general manager John Lelangue told Cycling News.

Ewan – who has also made clear his ambitions for a hilly home World Championships in Wollongong this year – has surprised repeatedly in recent seasons with his ability to make it over climbs that leave other sprinters floundering. Before the Giro d’Italia began, though, he did nothing to dampen the impression that stage 1 – with its 5.5km 4.2% gradient finish – was a big ask for the sprinters and even him.

“If I’m going good I think it’s not impossible, but it’s still going to be quite tough to win,” said Ewan in the lead up to the race. “I’ll try and I’ll either have the legs to do it or I won’t. It’s pretty simple.”

The legs were clearly there as Ewan sat in prime position just hundreds of metres from the Visegrád finish line.

“I felt really good. In that period in the last km when I knew I had to follow all the moves I was able to follow,” said Ewan in a post race video.

Anticipation within the team was starting to build, with the scenario looking set to play out just as they’d hoped.

“Until 400 metres we were still thinking about both having the pink jersey and being there in the sprint and he was the only one of the sprinters able to be on this level,” Lelangue said.

However, then he came crashing to the road, clipping the wheel of Girmay around the final bend, tipping sideways and sliding across the road. After slowly picking himself up from the tarmac, he rode through to the line just over a minute after winner Van der Poel, facing a night of nursing his abrasions rather than celebrating an opening victory and the maglia rosa.

“He’s more disappointed than hurt, he went pretty, pretty hard on the ground. But yeah, he’s alright, nothing broken. That’s the most important.” said Lelangue.

The team said that apart from several abrasions, Ewan came away without any severe injuries and would take to the start line of the second stage 9.2-kilometre individual time trial.

Ewan was also not the only Lotto Soudal rider to crash, with Belgian rider Harm Vanhoucke coming down as well a little further out from the line.

“Harm went pretty fast down at six to go in a mass pile up and he’s a little bit [sore] with the knee, with the shoulder,” said Lelangue. “But the most tricky is the knee to be honest. So we’ll see how he is spending the night and how he will be tomorrow morning”

SOURCE: CyclingNews   (go to source)
AUTHOR: Simone Giuliani Laura Weislo
All copyrights for this article, including images, are reserved to the original source and/or creator(s).