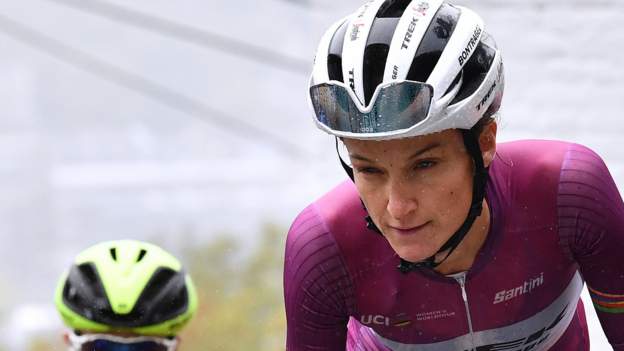 Britain’s Lizzie Deignan says she is “really excited” about plans for a women’s Tour de France in 2022.

Deignan, defends her La Course title on Saturday on the 107.7km route from Brest to Landerneau.

But the 32-year-old has likened the one-day race to an “appetiser”external-link and says the women’s peloton will be best served by the eight-day Tour de France Femmes.

“It’s about time really. There’s been so much of a push for it over the last 10 years,” she told BBC Sport.

“I am just really grateful that all that knocking on the door has worked and been listened to.

“I am really excited about it. I never thought it would happen to me during my career. To be able to say when I have finished that I took part in the Tour de France will be pretty special.”

The eighth edition of La Course will get under way with Deignan one of the favourites alongside Dutch star Marianne Vos and her compatriot, world champion Anna van der Breggen.

Deignan edged Vos to win the 2020 race in a dramatic sprint finish in Nice and believes that has made her approach to this year’s race easier.

“Obviously the expectations are higher but I feel that I have done it once, so why not do it again,” she said.

“It gives me a sense of confidence.”

Riders to watch at La Course

The British rider looks to be rediscovering her best form after illness marred her spring campaign. Victory at the women’s Tour de Suisse should allow her to be cautiously optimistic about replicating her 2020 success.

Vos, the winner in 2014 and 2019, comes into the race fresh from training with the Netherlands’ national squad in preparation for the Tokyo Olympics.

The 34-year-old looks bang on form having already registered impressive early-season wins at Gent-Wevelgem and the Amstel Gold Race.

The time trial and road race world champion should be a major contender on a rolling course that will suit her punchy style of riding.

Now 31, Van der Breggen has spoken of her intention to retire from the sport at the end of 2021 and it would not be a surprise to see her go out in a blaze of glory. She has already sealed superb victories at La Fleche Wallonne, Vuelta a Burgos and in the trial title at the Dutch Road Championships.

Who else can challenge?

Bar the absence of 2017 and 2018 winner Annemiek van Vleuten – who has elected to miss the race as she gears up for the Olympics – most of the biggest names in women’s cycling will be on the start line in Brest.

Aside from Van der Breggen and Vos, Demi Vollering looks the most likely Dutch rider to end up on the podium.

The 24-year-old was third in 2020 and has enjoyed an excellent season, claiming her first win in a monument classic at Liege-Bastogne-Liege, which suggests she will be more than capable of tackling the five categorised climbs.

Australian duo Grace Brown and Amanda Spratt cannot be discounted, while the terrain should also favour Marta Cavalli – one of Italy’s up-and-coming stars – if she dovetails well with team-mate Cecilie Uttrup Ludwig.

The Dane has not yet hit the same heights of 2020 but is another who could feature prominently.