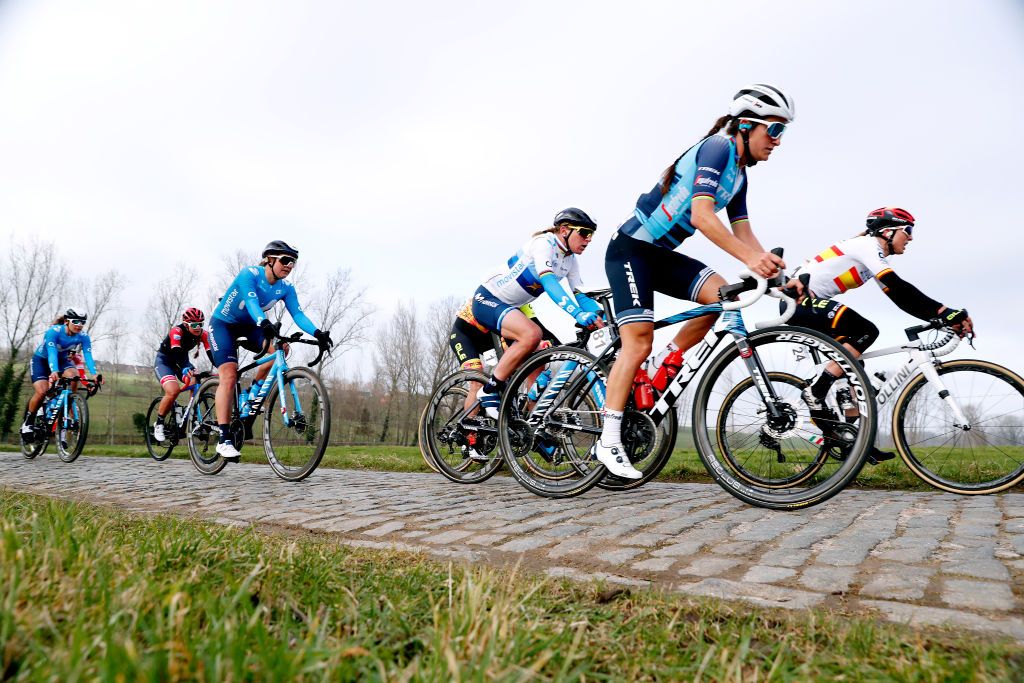 Lizzie Deignan (Trek-Segafredo) could hardly contain her excitement when asked about lining up to compete at the first-ever Paris-Roubaix Femmes to be held on October 2 in France. Deignan said that the men’s event, which is embarking on its 118th edition, is one of the only races she watches on television and she believes the inaugural women’s race will offer just as much of a spectacle.

“Everyone wants to watch Paris-Roubaix. I’m so grateful that I get to be a part of that show. I’m excited about it, almost as a fan doing a race, it’s a bit weird,” Deignan said. “From a personal perspective, yes, we’ve had Amstel and Liège, and races like that were added to the calendar, but in terms of personal memories, in terms of sitting down to watch a bike race, I’ve sat down to watch more Roubaix than Lièges and Amstels.”

The UCI along with organisers Amaury Sport Organisation (ASO) made the decision to add an inaugural women’s event to the late-season revised calendar during the coronavirus pandemic in 2020. The inaugural edition was cancelled last October, and then cancelled again this spring due to health restrictions and concerns related to COVID-19.

Deignan said the delays have only added to anticipation of the first-ever women’s event.

“It’s given the chance for everyone to recon, nobody can say that they have not had time to get prepared for this race. It’s been talked about more and more, and it’s been hyped up for so long now, we really need to deliver a good race, and I think it will be a spectacle,” said Deignan.

Deignan confirmed that she is in good form having targeted both the World Championships last week, where she finished 14th, and Paris-Roubaix Femmes.

“You need to be in top shape this week, there’s no doubt about it. I’ve trained really hard and rested really well for the last weeks coming into these races. I think it’s complementary that [Worlds and Paris-Roubaix] are near the same time,” she said.

Deignan added that the teams with specific equipment suited to the cobbles will have an advantage over the others.

“We have the beautiful Domane bike, and honestly, I think it’s a huge advantage. Doing the recons, I was expecting to come away with bloodied hands, sore shoulders, but I was pleasantly surprised.

“To be on a specific bike for cobbles makes a huge difference and that will be a definite advantage for the teams that have that opportunity,” she said.

The women will tackle 17 cobble sectors, for a total of 29.2km of pavè, and part of the route includes the two five-star sectors; Mons-en-Pévèle at the 67km mark and Carrefour de l’Arbre at the 98.5km mark, before the famed velodrome finish in Roubaix.

“I’m genuinely excited about this one. It’s such a fight to get into those cobble sections so obviously it’s a little bit more dangerous than some of the races, but there’s no huge climb that I’m scared of getting dropped on, or whatever, it’s just gonna be such a fun race to be a part of,” Deignan said.

“It’s huge and it means that from now on women’s cycling will be a part of cycling’s history. It has to start somewhere and I think in the last few years we’ve seen a huge amount of progression.

“Now we have this iconic and tough race, which is not normally associated, stereo-typically with women’s cycling – wrongly, obviously – but this is kind of the final step to prove that it’s nonsense and irrelevant and that it’s just about bike racing.”

The first Paris-Roubaix Femmes will follow with the re-launch of the Tour de France Femmes held in 2022. Deignan said that she’s happy with the progression but if there were another race she could see back on the calendar for women, too, it would be the women’s version of Milan-San Remo, the Primavera Rosa, which held its last edition in 2005.

“Milan-San Remo … we did have it years ago, my teammate Trixi Worrack won the last one. They’ve done it before, so why not again?”