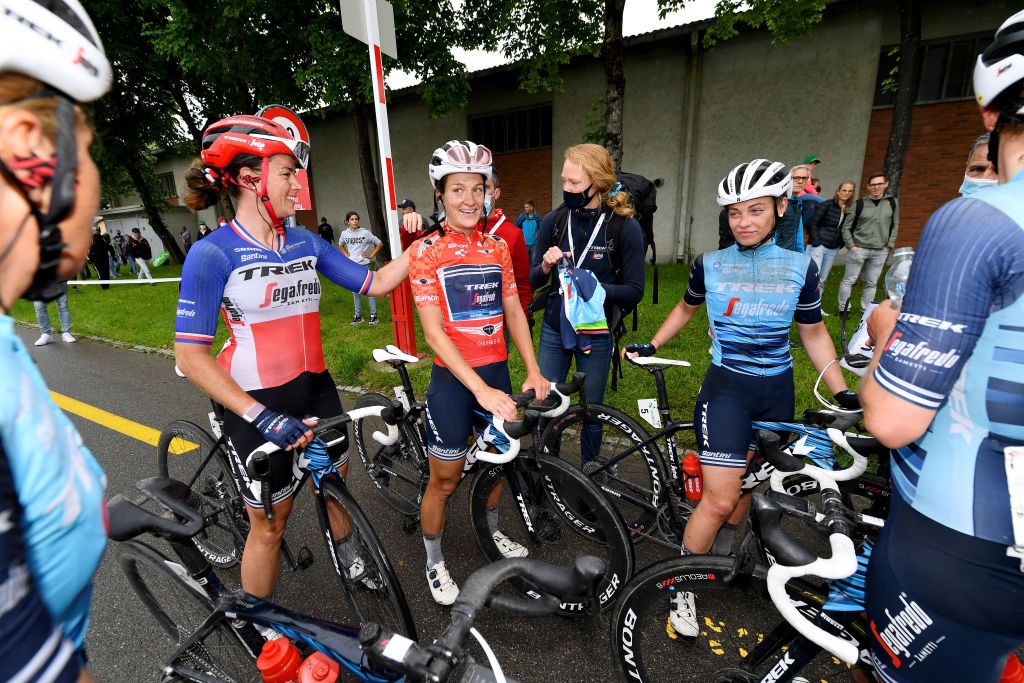 After a near miss on stage 1 at the Tour de Suisse Women, despite coming toward the line in the perfect situation, the pressure was on for Lizzie Deignan (Trek-Segafredo) as she entered into the flat final stage with just seconds standing between her and what could be a disappointment alleviating overall victory.

It has been a lean year for Deignan so far who, after suffering two bouts of illness, entered the Tour de Suisse without a 2021 win to her name. That probably didn’t make it any easier to take being trumped by Elise Chabbey (Canyon-SRAM) in the opening stage, when the Swiss rider won after luring Deignan into starting the sprint when the pair came to the line together.

“I was really disappointed in myself yesterday tactically and the way I raced,” said Deignan in a media statement. ”It meant that I really put pressure on myself and the whole team today, and this is really a team victory.”

Deignan entered the second day of the two stage Tour de Suisse – the first women’s edition of the race in 20 years – with a deficit of four seconds to Chabbey and a flat stage ahead. The 11 laps of the circuit around Frauenfeld offered bonus seconds at the finish line and on the three intermediate sprints on the fourth, seventh and tenth lap.

“It was clear to me that I had to go for the bonus seconds, ” said Deignan, who didn’t want to wait and potentially have to try her hand at securing the time she needed with a dash for position at the finish line. “I don’t particularly love the mass sprints…”

That meant the Trek-Segafredo team worked to keep the peloton together on the opening laps as they looked to the seconds on offer during the race. After success in the first of the intermediate sprints, the 32-year-old was only one second behind Chabbey.

The Swiss GC leader had crashed early and while she was able to continue, she had left it to her teammates to try and defend her lead by taking the early intermediate sprint bonuses. Alexis Ryan (Canyon-SRAM) hadn’t been able to trump Deignan in the first intermediate sprint but succeeded in the next, however with Deignan still managing second the former world champion now had the time she needed to take a one second lead in the GC race.

The breaks were then let go and Chabbey was left with just one intermediate sprint, or the finish line, to take back the lead. She attacked several times to attempt to get away though Deignan’s teammates kept closing down the moves.

The break stayed away, with Marta Bastianelli (Alé BTC Ljubljana) winning the sprint ahead of her eight breakaway companions and taking the stage, while Deignan rolled over the line near the head of the bunch, joyfully throwing her arms in the air as she secured overall victory.

“I really felt that the best thing about today was the pressure of the perfect teamwork – I had to deliver the win,” said Deignan.