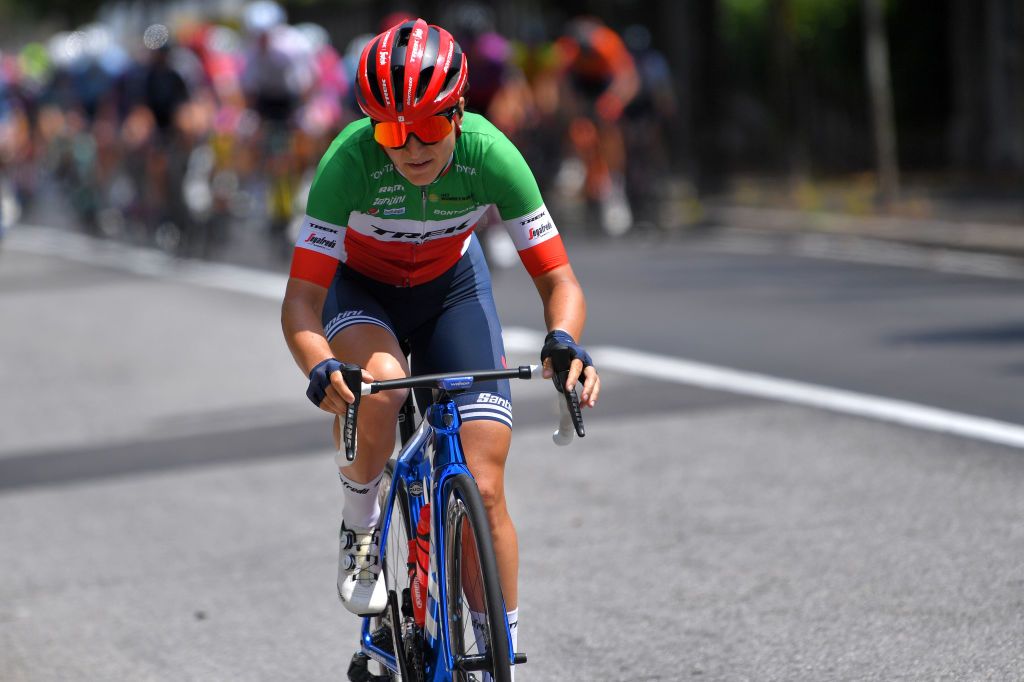 Before this year’s Giro d’Italia Donne started it seemed almost inconceivable that Elisa Longo Borghini (Trek-Segafredo) and Amanda Spratt (Team BikeExchange) would be in this position. The pair of riders – who have both twice placed on the podium in recent years – are sitting outside the top ten and, with little to lose, not playing the careful steady hand of a top GC contender but are instead prepared to roll the dice.

That helped make it an aggressive day of racing around the Lago di Como on stage 6, which appeared to be a day for the sprinters. However, instead of a relaxed procession toward an inevitable bunch sprint for the line, the 157 kilometre stage began at breakneck speed, covering 43.2 kilometres in the first hour and running 23 minutes ahead of the fastest schedule. Neither Trek-Segafredo or Team BikeExchange were prepared to sit back and just let the race easily play into the hands of the sprinters, instead diving in to try and fish out an against the odds stage win.

“We executed the plan we had in mind,” said Longo Borghini in a Twitter post. “We wanted a breakaway at halfway point and we played our chances, first with Ruth attacking and then with me.”

The Italian champion – who sits in 23rd position on the overall – got away with SD Worx rider Ashleigh Moolman-Pasio, one of the three riders from the team currently monopolising the overall podium positions. Anna van der Breggen sits in first and Demi Vollering third.

“I pushed hard with Moolman,” said Longo Borghini. “It was a pity that it was only her who joined me. With more riders also trying it could have been a good day out in the attack. It also felt useful for the team because my teammates could stay safe in the peloton until the sprint to help Lucinda [Brand].”

The attack may not have lasted, swept up at 13 kilometres to go, but there was little sense of regret evident in Longo Borghini’s comments.

“Today I experienced something different than my usual standard and I really enjoyed it.”

Both Trek-Segafredo and Team BikeExchange had options for the sprint, in Brand and Australian champion Sarah Roy, though with the form of Emma Norsgaard (Movistar), the Team DSM duo of Lorena Wiebes and Coryn Rivera, as well as the always tough to beat Marianne Vos (Jumbo-Visma), it is not surprising they weren’t prepared to wait to the line.

Team BikeExchange raced aggressively from the early stages of the race around the shores of the lake, not only trying their hand with Spratt – who is in 12th place on the overall – but forcing the issue a number of times in a number of ways.

“We tried a few times today” said Team BikeExchange’s Sarah Roy in a statement. “We tried early on in the race as a team, we tried to create a split and I think we did. But the roads were quite fast, so that didn’t really last. We tried again with Spratty at about 100km in; Spratty and I attacked off the front and a small group came with us over the last few hills, but again it didn’t stick.

“But we gave it a try and the team decided that instead of going for the sprint today we’d try to capitalise on the other sprint team trains being fatigued at the end, after having to chase all day with the two-rider break up the road,” said Roy. “In the last 4km Grace [Brown] and Georgia [Williams] set me up and I attacked as hard as I could and I got away with Tiffany Cromwell (Canyon-SRAM), she chopped off with me, but it wasn’t to be.”

In the end, the sprinters still had their day on the longest stage of the race, with Norsgaard taking the win, Rivera coming second while Vos took the final step on the podium.

The Australian team – which in 2018 and 2019 delivered Spratt to the podium of the Italian stage race and former team member Annemiek van Vleuten to the top step – may not have succeeded this time but they have every reason to continue with an aggressive approach. Trek Segafredo is still sitting within the top spots, though it is not the rider the team expected to have there as fourth-placed Lizzie Deignan entered adamant that hers was a support role. Spratt, however, is the only member of Team BikeExchange within the top 30 and at 7:56 behind playing it safe isn’t likely to be a strategy that yields a great deal for the squad, but rolling the dice could.

“Tomorrow we’ll try again.” said Roy. “It’s another stage suited to us so we should have some fun out there again.”