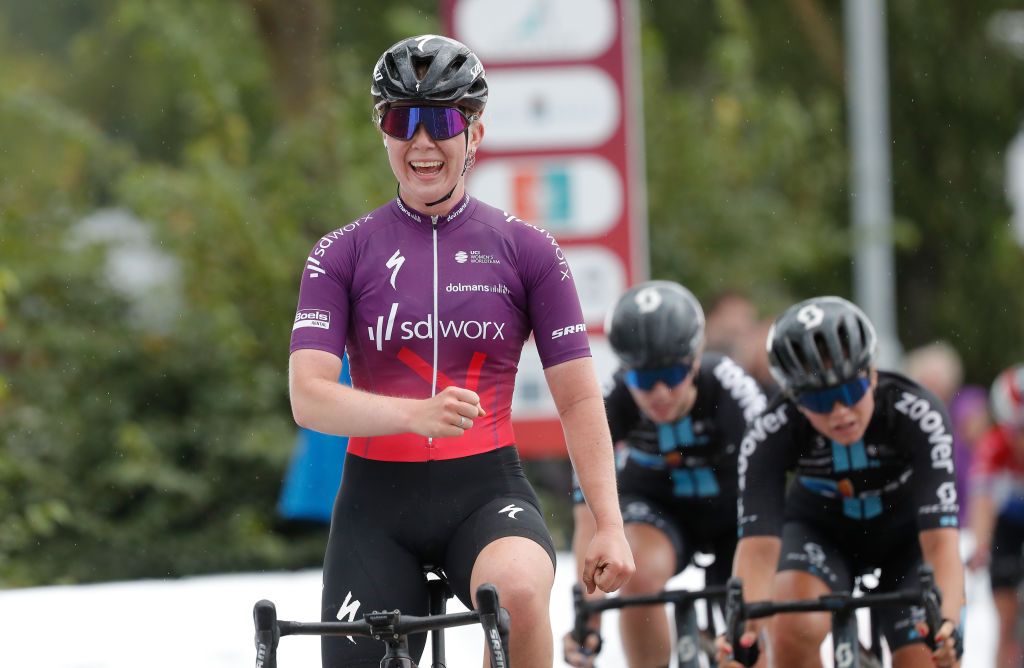 Dutch sprinter Lonneke Uneken says the contingent of young riders at SD Worx are given chances to race for the win themselves as well as ride in support of the team’s many successful riders.

Despite being one of the youngest riders in the team at 21, Uneken has recorded three wins for SD Worx this season, taking stages at the Healthy Ageing Tour, the Baloise Ladies Tour, and the Simac Ladies Tour.

“Before I joined the team, I was a bit scared, thinking when you join the team you immediately get a role to work for the others because you’re the youngest, and they’re all super strong,” she explains. “And I love to do that, because I love to help them win as well, but you also want to develop yourself and learn how to race finals.

“But it’s good because in this team, it doesn’t matter who is winning, as long as it’s one of us. And I think for riders like me and [Anna] Shackley and Niamh [Fisher-Black] that’s really important because we can really develop into better cyclists. When you race alongside these riders, you learn a lot from them.”

As a talented sprinter in her second year with the team, Uneken has been given opportunities to not only learn from her experienced teammates but also race as their designated leader.

When Uneken won stage 3 of the Simac Ladies Tour in August, she was part of a small group that included Chantal van den Broek-Blaak, Amy Pieters and Demi Vollering.

“That felt pretty special,” she said. “The crash happened and there were four of us in front. We had Amy, Chantal and Demi there, they’re all riders I look up to. We’d said the day before ‘if it’s going to be a bunch sprint, we’ll go for Lonneke’ so I knew I had to sprint.

“When you have those three riding in front, then you know you want to win, but you also feel the pressure: if they’re riding for you, you have to win.”

It’s not all racing for the win, Uneken does her fair share of work for her teammates too, a responsibility she enjoys being able to balance with her own ambitions.

“I can get bottles from the car or I can ride on the front or jump with a breakaway,” she said. “I love to ride on the front with Amy and Demi to chase a group back. That also really shows how it works in the team like on the day you can race for the win and the next you’re riding on the front for half of the stage. I think that’s in the DNA of the team really.”

With a contract signed until 2024, Uneken’s objective is to continue developing as a sprinter and one-day rider in the supportive environment as SD Worx.

“It gives me a lot of confidence that I get the time and the belief from the team to develop myself,” she said. “And with Anna [van der Breggen] now growing into her new role, she really supports that too and she likes to help the younger riders.”