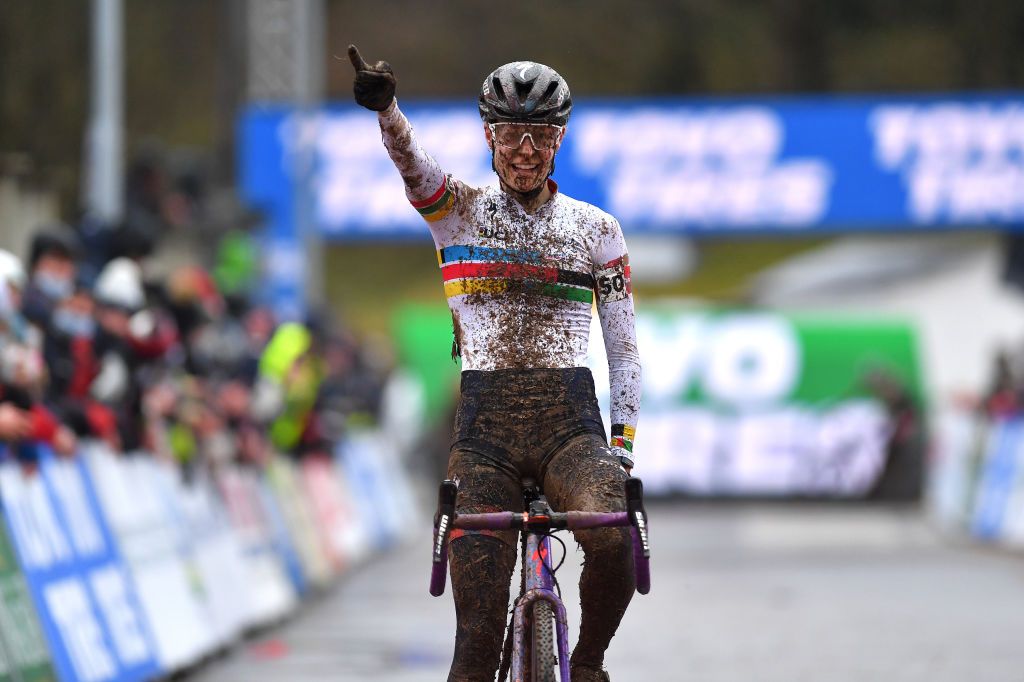 Maghalie Rochette (Specialized-Feedback Sports) found a big silver lining after the postponement of Canada’s Cyclo-cross National Championships due to massive floods, making a quick dash to race at Besançon instead where she took her first European Cyclo-cross World Cup podium.

The race for the national title, which Rochette has won three-times, had been scheduled to take place on the same weekend as the World Cup in France so the Canadian hadn’t even expected to be racing at Besançon, let alone fulfilling a long-held European goal.

“It has been a dream (and a goal) for a long time to podium at a European World Cup,” Rochette said in her regular post-race newsletter. ”In fact, it took me 56 tries to finally get it. 56 times of failing my goal and trying again. On those 56 races in Europe, over the past 5 years, I did have a few good ones where I felt like I had raced to my full potential (maybe 10-15 of those), but mostly I had sub-par races that left me feeling disappointed in myself.”

“So what changed on try #57 today? Well, absolutely nothing. And I think this is a good news… I did not feel particularly stronger than usual, I didn’t feel like I was in an alien-like mindset, or that my skills suddenly got much better. In fact, I even messed up my start and found myself super far in the first few minutes. I simply rode my bike in a focused and consistent way throughout the race. I was able to stay calm and composed and not get too wrapped up in how I was doing. I didn’t make many mistakes…and that’s it. And to me, this is a great news, because it means I could possibly do it again. Normal can sometimes be good enough, and normal is much more attainable than extraordinary. “

While it may have been Rochette’s first time on a World Cup podium in Europe, it’s not her first time on the steps in the top-tier series, with the 28-year-old having taken the victory at Iowa City in 2019. The Pan-American cyclo-cross champion has also taken to the top ten repeatedly so far in this season’s World Cups, taking tenth in Tabor, seventh at Fayetteville and tenth at Waterloo.

Despite a start that left Rochette well back in the field initially at Besançon she quickly worked her way up in that opening lap, bringing herself within reach of a group of Dutch challengers early in the muddy race. With two laps to go Rochette then passed Fem Van Empel (Pauwels Sauzen-Bingoal) and Puck Pieterse (Alpecin-Fenix) to shift into 3rd place. She then kept pushing to move further up the podium, catching and passing Denise Betsema (Pauwels Sauzen-Bingoal) before the final lap.

Winner Lucinda Brand (Baloise Trek Lions), however, was untouchable, with the World Champion having launched in the initial stages of the eighth round of the World Cup series, holding a gap out the front till the very end. Still, Rochette couldn’t help but throw her hands in the air as she came second, as breaking through what has often been a Dutch stranglehold on the European podiums was well worth celebrating.

“Finally — Well, it took 56 tries, but I wouldn’t change a thing. I’m proud we kept trying and it feels good to have had a good one. It was worth all the tries,” said Rochette, who is staying in Europe to race through into January.

“I’ll definitely keep enjoying this feeling, but tomorrow we get back to work because I hope it won’t be the last one.”

The supportive cluster of riders from North America also had two more in the top ten, with US champion Clara Honsinger (Cannondale/Cyclocrossworld) finishing seventh and teammate, 20-year-old Katie Clouse, delivering her best World Cup finish yet with ninth place.