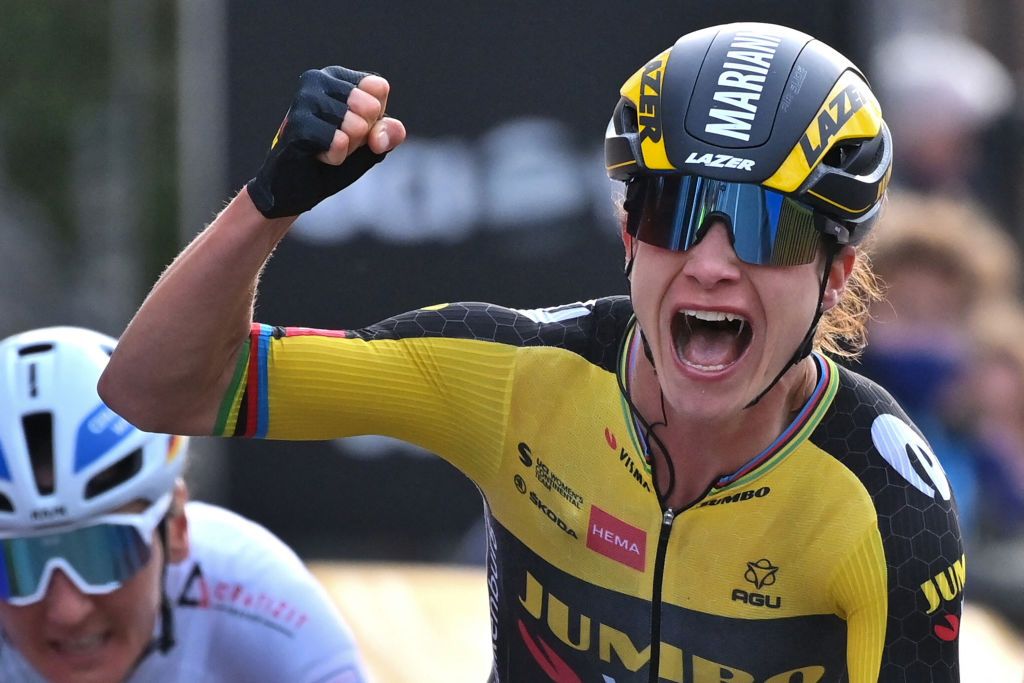 Marianne Vos (Jumbo-Visma) admitted that she wasn’t going to compete at the first edition of the women’s Paris-Roubaix, originally scheduled for this Sunday, because it conflicted with her upcoming goals at the Ardennes Classic. However, Vos told Cycling News that she may reconsider and participate in the famed cobbled classic now that it has been postponed until October 2.

“Paris-Roubaix wan’t on my plan because I put my focus on Tour of Flanders, and the combination of Amstel Gold Race, Flèche Wallonne and Liège-Bastogne-Liège,” Vos told Cycling News.

“It’s a fantastic ambition and I hope it will run this year. If it is held in October, we might think about [adding] it in my calendar again, and about giving it another thought.”

Vos won Gent-Wevelgem, her first win of the season, but also opted not to race mid-week Women’s WorldTour races such as Brugge-De Panne and Dwars door Vlaanderen, along with Paris-Roubaix, to be fresh for selected targets in her spring classics campaign.

“As a cyclo-cross rider and also as a lover of bike racing and the heroics of Paris-Roubaix, it was not an easy decision,” Vos said regarding her decision to skip Paris-Roubaix when it was scheduled for April 11.

“We talked about it with the team and unfortunately I had to make some choices. There were races that I decided not to race, for example, not riding Brugge-De Panne, Dwars door Vlaanderen, and not taking Paris-Roubaix on my calendar.”

The first-ever women’s edition of Paris-Roubaix was added to the Women’s WorldTour for October 25 in 2020, but was cancelled due to COVID-19. The first edition to be held will now take place on October 2, 2021, after a second cancellation from April.

The women’s race expected to begin in Denain, south of Roubaix. The peloton will race 116 kilometres before finishing on the famous Roubaix Velodrome. There are 17 sectors of cobbled roads with the pavé beginning after just 20km of racing.

Two sectors rated at the maximum difficulty level will be included in the race – Mons-en-Pévèle and the Carrefour de l’Arbre – while cobbles will take up 29.5km of the race route, meaning a quarter of the action will take place on the famous stones of northern France.

Vos said she has previewed the cobbles of Paris-Roubaix and that she expects a rider with a lot of power and confidence to do well.

There are expected to be several other cyclo-cross specialists on the start line as well including world champion Lucinda Brand (Trek-Segafredo) and former world champions Ceylin del Carmen Alvarado and Sanne Cant (Plantur Pura).

“I’ve seen some of the course. It’s difficult. Having some cyclo-cross skills might be an advantage because you feel more at ease when it’s gravel or wet or slippery,” Vos said.

“On the other hand, it’s still a very hard race and you need a big engine and a lot of power. I don’t think being a cyclo-cross rider gives a huge advantage but maybe it gives you more confidence, which is helpful to have less stress, still I think you need the power.”

SOURCE: CyclingNews   (go to source)
AUTHOR: kirsten.frattini@futurenet.com
All copyrights for this article, including images, are reserved to the original source and/or creator(s).