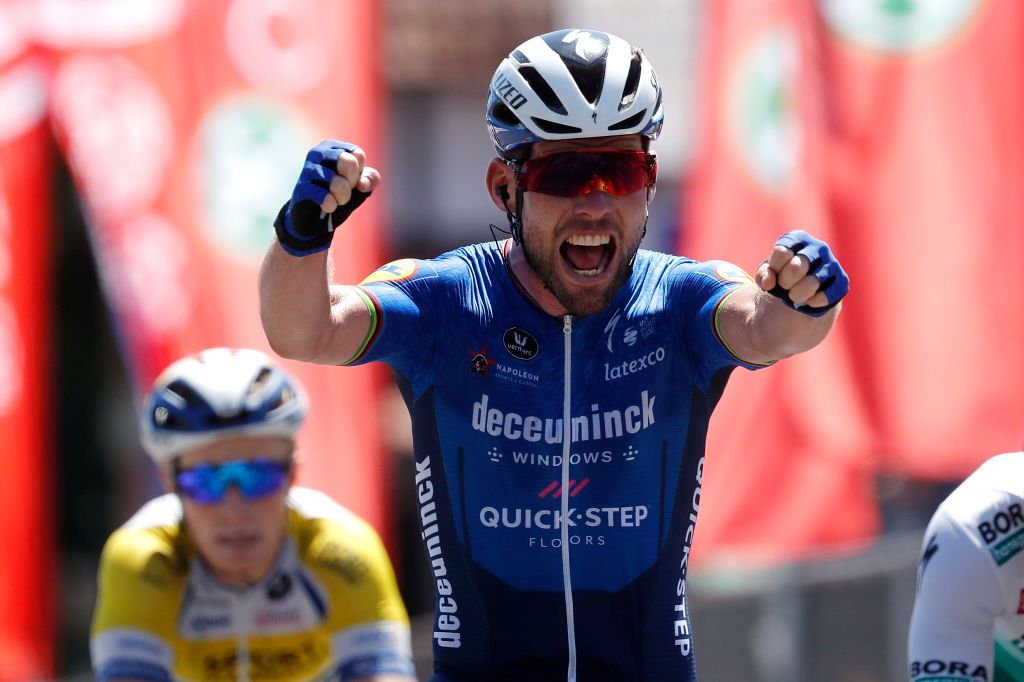 Mark Cavendish (Deceuninck-QuickStep) has hit back at speculation that he might replace an injured Sam Bennett at the upcoming Tour de France, insisting the Irishman is still Deceuninck-QuickStep’s first option but without ruling himself out of final selection.

Cavendish won stage 5 at the Baloise Belgium Tour on Sunday showing strong form and superb speed in the sprint but diplomatically said that the team will wait and see how well Bennett recovers before making any decisions.

“We have to see,” Cavendish said in a post-race interview at the Basloise Belgium Tour.

“We have the current green-jersey winner in Sam Bennett. I think it’s right to see how he’s going before we think of anything else.”

Deceuninck-QuickStep announced last week that Bennett was forced to miss the Baloise Belgium Tour due to a right knee injury sustained in a training ride.

Cavendish was then called up to replace Bennett at the Baloise Belgium Tour, with the Manxman joined at the five-day race by Davide Ballerini, Iljo Keisse, Yves Lampaert, Michael Mørkøv, Zdenek Štybar and Remco Evenepoel.

Cavendish won the finale stage 5 and Evenepoel won the overall classification on Sunday.

“Belgium was always on my programme and Sam wanted to do it, so I got kicked out of it, so it’s serendipity that I’m back in it with Mørkøv and the rest of the guys; Ballerini, Stybar, Remco, Yves and Iijo. That’s a hit team,” Cavendish explained with pride.

“That’s a team that any kid would dream of being in, and I’m a 36-year-old that’s been around for a lot of years.”

On Saturday Deceuninck-QuickStep team manager Patrick Lefevere revealed that Bennett’s knee problem could mean he misses the Tour de France, but also stated that it would be unlikely that he would be replaced by Cavendish unless a new, better paid, contract could be agreed for the rest of the season and for 2022.

In his weekly column in Het Niewsblad, Lefevere stated that he spoke with Cavendish about competing in another Grand Tour, but Cavendish said, “not at this salary, no.”

Lefevere also pointed to the level of pressure that would be placed on Cavendish should he compete at the Tour de France, which he said would be unfair, pointing to additional pressure put on him over breaking Eddy Merckx’s record of 34 stage wins. Cavendish has won 30.

“It’s not fair to have a rider with a minimum contract as a Deceuninck-QuickStep lead sprinter, with all the pressure and expectations that come with it,” Lefevere wrote.

Lefevere also said there was “no real plan B as a sprinter” for the Tour de France and that the team would allow Bennett, who won the green points jersey last year, time to rest until Monday before making any further decisions.

Cavendish signed with Deceuninck-QuickStep at the start of this season, reported with extra sponsors covering his low-level contract after his career almost ended in 2020 after several seasons hit by Epstein-Barr syndrome. However he gradually found form and has enjoyed a run of success with four stage wins at the Tour of Turkey in April. His stage 5 victory at the Baloise Belgium Tour marks his fifth win of this season.

In a post-race interview in Beringen, Cavendish was asked if he has had discussions with Lefevere about competing at the Tour de France or if he wanted to be on the start line in Brest on June 26. He didn’t reveal if he wants to ride the Tour de France but did not turn it down, blaming the media for the hype and speculation about his possible presence in France.

“I don’t know. At the end of the day, it’s all talk,” he said, clearly emotional after his sprint win where he beat possible Tour rivals Tim Merlier (Alpecin-Fenix),  Pascal Ackermann (Bora-Hansgrohe) and Caleb Ewan (Lotto Soudal).

“This is a thing that happens a lot. The thing with Eddy Merckx record? I never started that, it was the media that started that, and all of a sudden, it’s like, I’m going for it.

“It’s the same with this. It’s you guys [the media] that started whether or not I should go to the Tour de France,” Cavendish said.