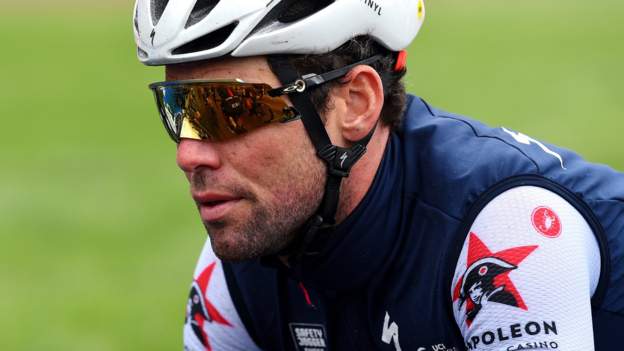 Cavendish has competed in 159 races during his career

Britain’s Mark Cavendish is unlikely to return to the Tour de France after Quick Step-Alpha Vinyl selected him for the Giro d’Italia.

Dutch sprinter Fabio Jakobsen is expected to compete for the team at the Tour instead.

“Mark is our man for the flat [in Italy],” said Davide Bramati.

“He has won a lot of stages at the Giro, and he can rely on many strong riders to support and guide him in the hectic bunch sprints,” the sports director added.

Cavendish narrowly missed out on breaking Merckx’s record during the final stage of last year’s Tour, when he was beaten by Belgian Wout van Aert of Jumbo-Visma.

His form during the race was an extraordinary turnaround following several years without victory through injury and illness.

Cavendish, who has won 15 Giro stages through his illustrious sprinting career, has kept up his improved form in 2022, including becoming the first British rider ever to win the Milano-Torino one-day race.

He has won three races this season, compared to Jakobsen’s six.

Mario Cipollini has won the most stages of Italy’s three-week Grand Tour with 42.

Meanwhile, Briton Simon Yates has been selected to lead Team BikeExchange-Jayco at the three-week event.

The 29-year-old led the race for 13 days in 2018 and finished third in last year’s Giro behind Egan Bernal, who is unlikely to compete this season after suffering serious injuries in a training crash in January.

The race begins in Hungary on Friday, 6 May for three stages, before returning to Italy.