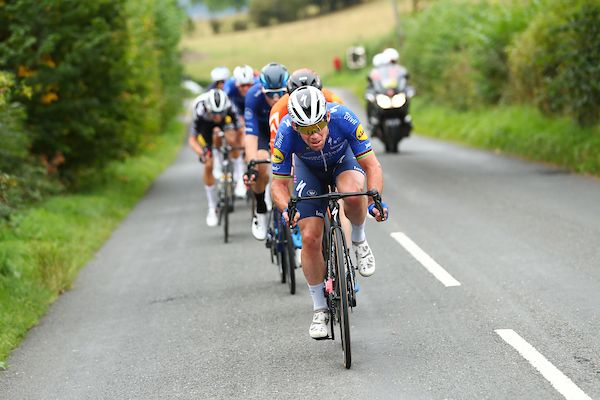 Mark Cavendish vented his frustration at a television motorbike that he perceived to be handing an advantage to his rivals at the Tour of Britain, before using that same motorbike to explain to viewers why he was upset.

Cavendish didn’t hang around for a sprint on stage 6 of the race on Friday, instead heading up the road as part of a nine-man breakaway that formed after a frantic opening hour.

However, he soon appeared uneasy with the presence of Team DSM’s Mark Donovan, whose high position in the overall standings meant the group was being kept on a tight leash by the Ineos-led peloton.

With Deceuninck-QuickStep Tim Declercq for company, the pair combined to get rid of Donovan. First of all Declercq accelerated, while Cavendish let a gap go and allowed himself to be dropped along with Donovan, George Bennett (Jumbo-Visma), and Mason Holyman (Israel Start-Up Nation). Cavendish then sat on as he forced the others to chase, before suddenly attacking them to bridge the gap back to the break.

Bennett latched onto his wheel but Donovan and Holyman were left behind and never saw the front of the race again.

The manoeuvre wasn’t quite as clean as that, however, and the British pair were chasing at only a few seconds for a while as Cavendish and Declercq tried to push the front group on. It was at that point that Cavendish swung to the back of the group, raised his arm and shouted back to the TV moto, which he believed was providing a slipstream and therefore an aerodynamic advantage to the chasing pair.

“You’re helping them! What’s wrong with you?!” Cavendish shouted, as heard in the video below.

Moments later, when the moto pulled up alongside his lead group, he addressed the cameras and the viewers directly.

“For all you people at home, these motorbikes have a bearing on the race,” he said. “The guys are sat on them.”

Despite the best efforts of the remaining seven, and despite late attacks from Cavendish and Declercq, the breakaway was caught inside the final 20km. In the end, it was a select 10-man group, rather than a full bunch, that contested the finish, as Wout van Aert (Jumbo-Visma) attacked on a small climb with 14km to go.

Cavendish’s teammate Julian Alaphilippe was alive to it and had Mikkel Honoré in the group to lead him out in the sprint for the line. However, Van Aert proved strongest to win his third stage of this year’s race, with Ethan Hayter (Ineos Grenadiers) also getting past Alaphilippe to take second place and retain the navy jersey of overall leader.

“We decided to attack early in the stage and we had both Mark and Tim, who put in a good effort at the front and remained there until close to the finish. We knew it was going to be a hard task on this course, but why not give it a go? You never try, you never win,” said team director Brian Holm.

“Then Julian and Mikkel showed their good legs in the finale, with the latter delivering a great lead-out to Julian, who was up there again and took a solid podium, which confirms his upward trajectory for the final part of the season.

With two stages remaining, Alaphilippe lies third overall, 21 seconds down on Hayter and 17 down on Van Aert, while Honoré himself is fourth at 35 seconds.