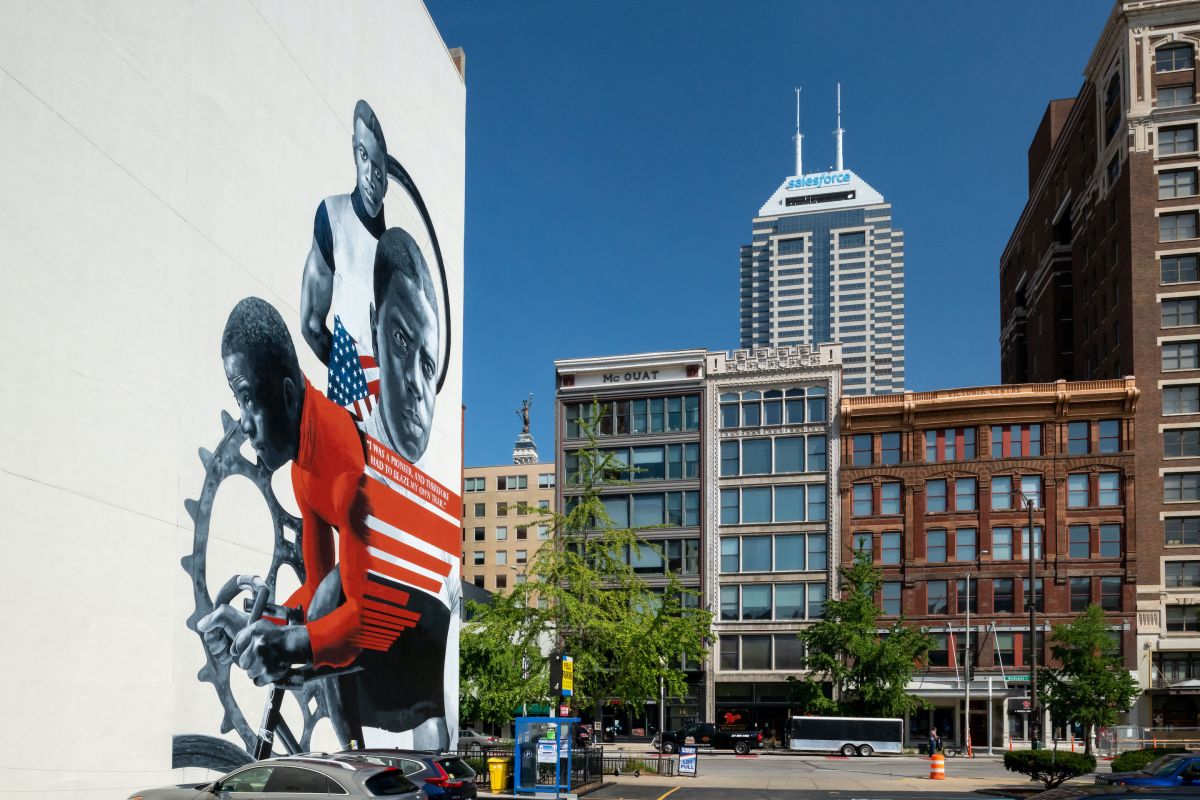 You could say Marshall Walter “Major” Taylor was larger than life on and off the bicycle. His hometown of Indianapolis continued to prove that last week by honouring the cycling and human rights legend with a giant, five-story mural in its downtown district.

As part of the Indianapolis Arts Council Bicentennial Legends mural series that began last year, the organisation and city representatives had a ribbon-cutting ceremony on September 9 to unveil the artwork, certifying the day as Marshall “Major” Taylor Day. The mural project caps four years of planning and involved 40 artists that submitted samples.

Showing Taylor across the years of his cycling career, the final piece is intended to motivate others with the towering likeness. It features Taylor’s words from his self-published autobiography The Fastest Bicycle Rider in the World: “I was a pioneer, and therefore had to blaze my own trail”.

Taylor was the first Black world champion in the sport of cycling in 1899, winning the men’s sprint event in Montréal, and went on to set world records and win races around the globe for another decade. Over the course of a 14-year sports career, and many more years in a continued fight against racism in the US, the Indiana native made a name for himself and helped blaze a trail for others.

He began racing a bicycle at the age of 13, when he was unofficially entered by a race organiser into a 10-mile handicap race against an elite field of 150 riders, and he won. Two years later in 1894 he would officially begin a public campaign to correct social injustice, writing a letter to the editor of “The Bearings” cycling magazine to question why the League of American Wheelmen should restrict membership to people of colour, as noted in the magazine’s editorial comment that “it is against the admission of the negro to the L.A.W.”

But he used his legs to lead his mission. Author Peter Joffre Nye noted that Taylor won 42 of 57 races at home and abroad in 1901 with a campaign as a match sprinter and earned more than $10,000 in prize money and appearance fees (equivalent today to $310,000).

“He was lauded abroad for chain lightning in his legs and a shrewd sense of tactics, but in his homeland as he traveled to races, restaurants and hotels routinely refused to serve him,” explained Nye in a statement for the mural ceremony.

The Taylor mural has been placed on the outside of the Indianapolis law firm of Barnes & Thornburg LLP and will remain there for 15 years. His hometown of Indianapolis also honours Taylor with its Major Taylor Velodrome. He was posthumously inducted into the Hall of Fame of both USA Cycling and the UCI.