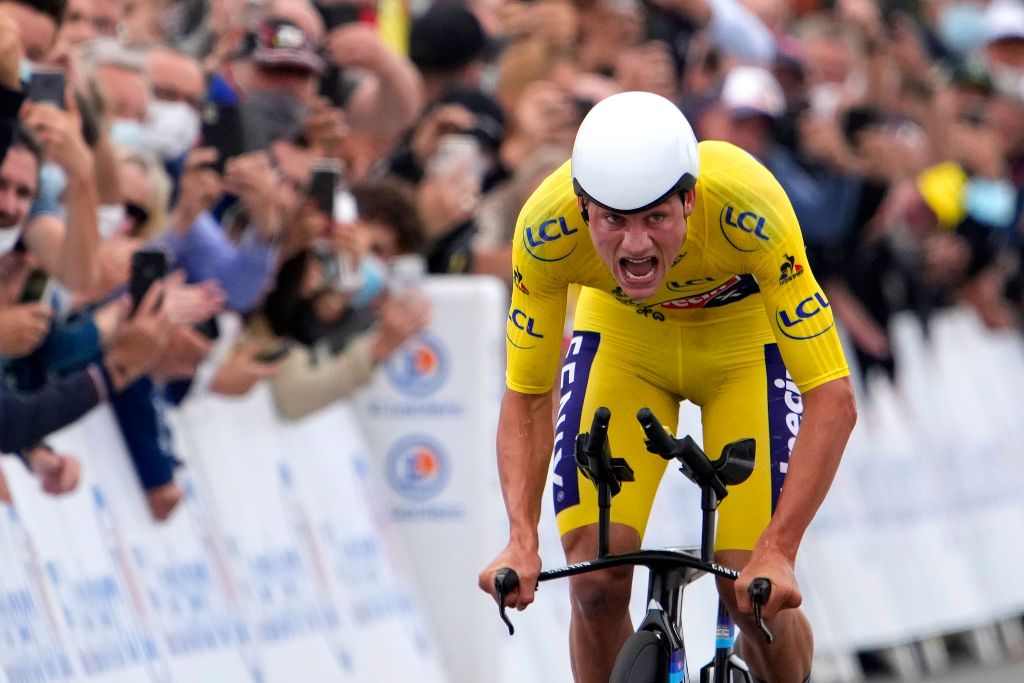 Tour de France leader Mathieu van der Poel had a long night of scrambling to tweak his equipment before the stage 5 time trial in Laval but the work paid off as the Alpecin-Fenix rider fought all the way to the line and held onto his leader’s yellow jersey by just eight seconds.

“It’s incredible, I didn’t think it was possible but the mechanics worked on the time trial bike until midnight to try to help me be more aero. I’ll remember this day for a long time,” Van der Poel revealed after pulling on the yellow jersey for the fourth day.

“I have to thank the team, everything turned out better than we even expected. The yellow jersey gave me wings, it was special riding through the crowds in this jersey.”

Van der Poel set a time of 32:31 for the 27.2km loop around Laval, finishing fifth and ahead of the likes of Danish time trial champion and Tour of Flanders winner Kasper Asgreen (Deceuninck-QuickStep) and Primož Roglič (Jumbo-Visma), who was 13 seconds slower and hampered by his stage 3 crash injuries.

Van der Poel leads Pogačar by just eight seconds, less than the time bonus awarded to Thursday’s stage winner. Van Aert is third at 30 seconds, while Julian Alaphilippe (Deceuninck-QuickStep), who had designs on regaining yellow in Laval but was not on a good day, slipped to fourth at 48 seconds.

Alpecin-Fenix pulled out all the stops to find the best possible time trial equipment for Van der Poel, even if meant he was sponsor-incorrect and using a mix of brands.

The team bought a pair of Princeton Carbonworks wheels, employing someone to drive 900km north from Andorra to hand-deliver them to the team. Then he ultimately chose to forgo using the Wake 6560 front wheel and his sponsor-correct Canyon Speedmax CFR was fitted with an Aerocoach Aeox Titan front wheel, which was paired with the Blur 633 from Princeton Carbonworks.

The standard Canyon cockpit was replaced with Aerocoach’s Ascalon extensions instead.

All the marginal gains added up and helped him hang onto the yellow jersey.

“We changed the handlebars to get more aero, we raised them a bit, then, of course, we changed the helmet and wheels,” Van der Poel confirmed, admitting he had trained and raced little on his time trial bike due to racing commitments on the road and mountain biking.

“The only time I did a TT was at the Tour de Suisse, so this is the second time, I didn’t touch it before,” he admitted.

“I really surprised myself in the TT but when I did the recon in the morning, I felt I could have a very big day. I knew I had the watts somewhere, it was just a matter of position.

“I really needed good legs too but there was also lots of encouragement along the route. The parcours also suited me and I felt strong, I can be proud of this one.”

Van der Poel can fight for bonus seconds during the flat stage 6 to Chateauroux to hold off Pogacar and then will likely do the same on the following day’s long and hilly ride to Le Creusot.

Saturday’s first Alpine stage to Le Grand-Bornand could be the day he loses the yellow jersey to Pogačar as the overall contenders emerge in the high mountains.

“What Tadej did was amazing, I can only say ‘chapeau’ to him. I think Tadej could well go on to win the Tour in Paris. To win this TT as a GC rider is huge, he deserves it.”