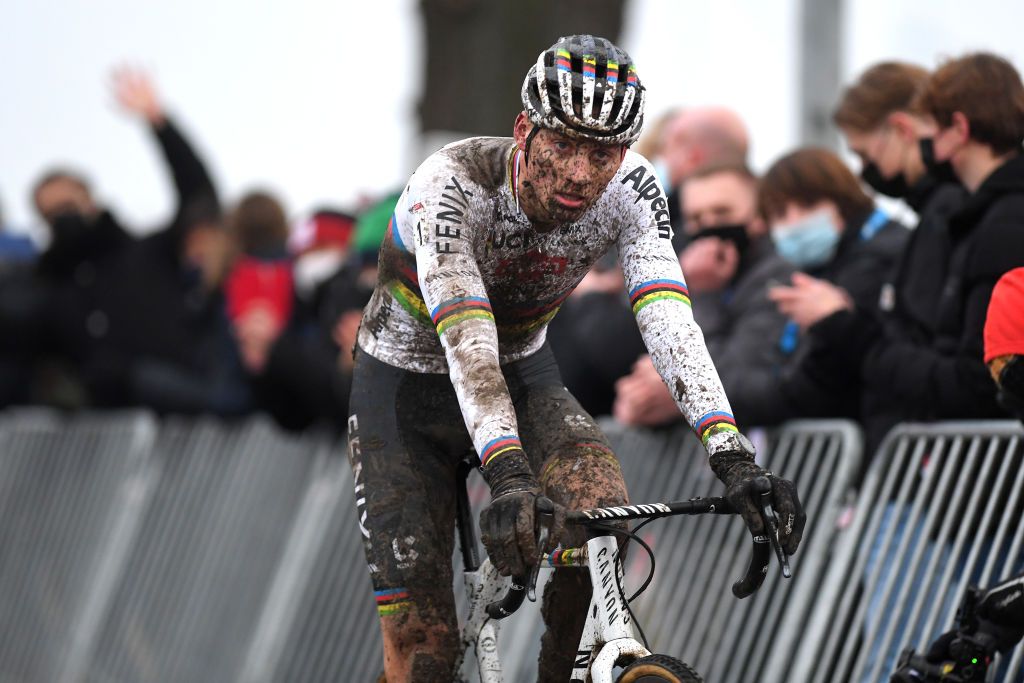 Mathieu van der Poel made his return to cyclo-cross on Sunday at World Cup Dendermonde and despite recent injuries the World Champion proved he was not far from solid form. As anticipated, the Alpecin-Fenix rider challenged Wout van Aert (Jumbo-Visma) at the front of the muddy race, but the Belgian broke away for a dominant win and took his fourth victory of the season.

“Dendermonde was a tough one to start with,” Van der Poel admitted after the race before heading to the awards ceremony. “This is in line with my expectations.”

Van Aert made his move on the fifth lap to charge 11 seconds ahead of his rival, and went on for his second consecutive World Cup victory,  49 seconds ahead of Van der Poel, and another 29 seconds in front of Toon Aerts (Baloise Trek Lions) who finished third. A duel with Tom Pidcock (Ineos Grenadiers) never materialised, as the Briton finished almost three minutes back for eighth place.

“It was a bit of a search for me in the beginning. I was caught in a big group, and because of that, I lost my sight on the course. As the first lap went on, the situation improved, and I was able to anticipate the course of the race. I tried to put Van der Poel and Aerts under pressure early on, but the desired result did not materialise,” Van Aert said in a team statement after his win. “Fortunately, the second attempt did pay off.”

Van der Poel was due to make his cyclo-cross debut last weekend at the Rucphen World Cup in the Netherlands but he delayed for a week to allow extra time for a knee injury suffered in winter training to improve. The second half of his road racing season in 2021 was disrupted by a back injury. He recently trained at an Alpecin-Fenix gathering in Spain but expected it would take him a few races to regain top form for cyclo-cross season.

“The first half of the [race] went OK, the second half it went less and less,” Van der Poel said after his second-place finish. “I started to get a bit tired, and on some parts I quickly caught my breath. That’s why at a certain point I had to choose a pace that I could maintain.”

The pair will clash again on Monday at the next round of the Superprestige series at Heusden-Zolder. Round 13 of World Cup will be held in Hulst on January 2. All races for elite men and women will be covered by Cycling News with full race reports and photo galleries.

“I love the atmosphere that surrounds this sport, although it was a shame that the public was not allowed to be present today,” Van Aert said. “I am happy with this victory, and I hope I can continue these results in the coming period. The next challenge will be tomorrow.”