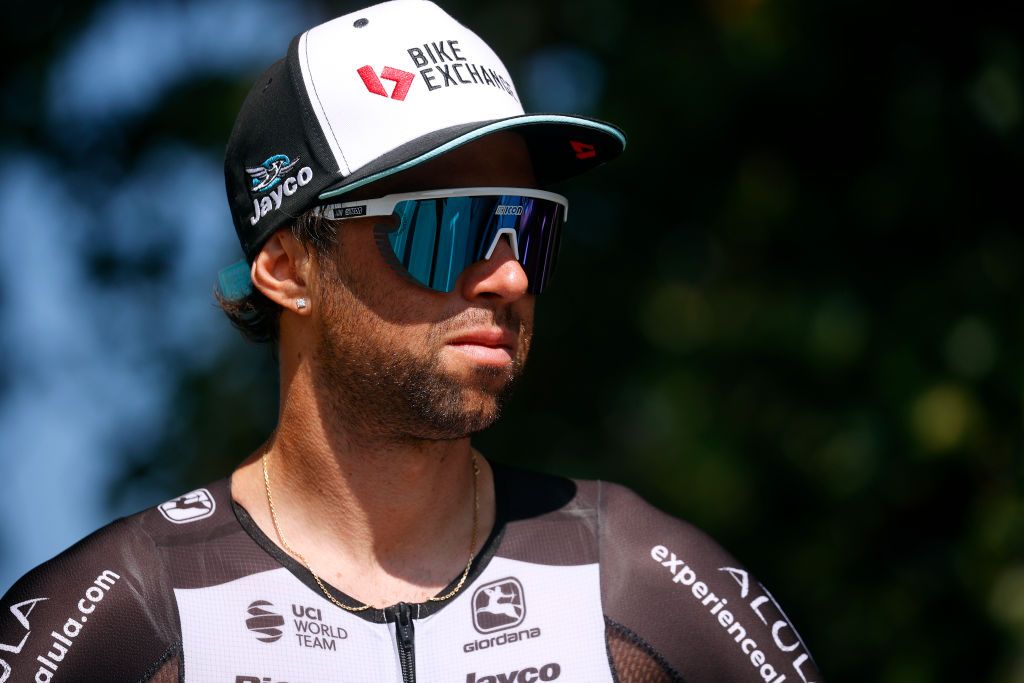 Michael Matthews (Team BikeExchange) may have enthusiastically welcomed Mark Cavendish’s presence at the Tour de France this year but the price has been another day of watching from behind. The Deceuninck-QuickStep rider launched toward the stage 10 finish line with an unassailable turn of speed, again snatching the win and further stretching the gap to Matthews in the green jersey competition.

Matthews ended up slotting into the top five for a third time this Tour. The headway the Australian had made during the stage to narrow Cavendish’s lead in the green jersey competition, by taking points in the intermediate sprint, was quickly obliterated on the Valence finish line.

“Coming into the last 30km there were crosswinds over the top of the final climb and Deceuninck-Quickstep tried split the bunch a bit but it all sort of came back together again,” said Matthews in a team statement. “Luka (Mezgec) and the boys did a really good job to position me there in the final, but Cavendish is just too fast these days and I had to settle for fifth.”

First place came with 50 points toward the green jersey competition, while fifth came with 16. That meant Cavendish added a considerable chunk to his lead, however not as much as it would have been had Matthews and Team BikeExchange not worked hard to take those points at the intermediate sprint, which came at the top of a climb.

“The boys did a really good job and opened up the first intermediate sprint so that the pure sprinters couldn’t get any points,” Matt White, head sport director, said. “Sonny Colbrelli beat us but Cavendish and the other guys didn’t get any more points for the green jersey competition.”

Matthews took 13 points for fourth place in the intermediate sprint, as there was a duo out front in the break, while one spot ahead Colbrelli (Bahrain-Victorious) took 15 points. Still Colbrelli failed to take points on the finish line, which meant Matthews ultimately stretched out his points lead on the Italian rider. Cavendish now sits in first with 218 points, Matthews has 159 in second and Colbrelli 136 in third, just three points ahead of fourth-placed Jasper Philipsen (Alpecin-Fenix).

White said on the rest day the team would be attempting to pick the best opportunities to gather intermediate points but securing a second green jersey for Matthews remained a challenge, given Colbrelli’s climbing strength and Cavendish’s rich vein of form. “I think realistically the only way for us to win the green jersey is for Mark to get eliminated [on a mountain stage by not making the time cut – Ed.]”

It’s a fate that has already befallen some sprinters, with Arnaud Démare (Groupama-FDJ) falling outside the limit on stage 9 while stage 3 winner Tim Merlier (Alpecin-Fenix) also abandoned during the stage as the tail end of the race disappeared off into the distance. Cavendish finished just 1:32 ahead of the 37:20 time cut while Matthews, who fares far better on the hills than the Briton, was comfortably ensconced in the main group which had come over the line with nearly six minutes to spare.

After stage 10 Cavendish questioned Team BikeExchange’s tactics, with the squad not only putting on the pressure before the intermediate sprint but also reappearing at the front to raise the tempo when there was another uncategorised climb in the final 40 kilometres, presumably to try and drain the legs of Cavendish.

“Honestly – they’ve got to try something, it’s bike racing – but I feel like they’ve burned their matches doing that,” said Cavendish. “Michael just had one guy trying to help him in the final when he could have had the whole team to match ours.”

Team BikeExchange who entered the Tour de France with aims that extend beyond supporting Matthews – from a since crash-quashed GC target to the ever present opportunity of breakaway wins – is now turning its attention to a mountainous stage 11.

“We’ve got a couple of times up Mont Ventoux tomorrow, it will be a big day for the breakaway and the plan is to have someone in it,” said White.