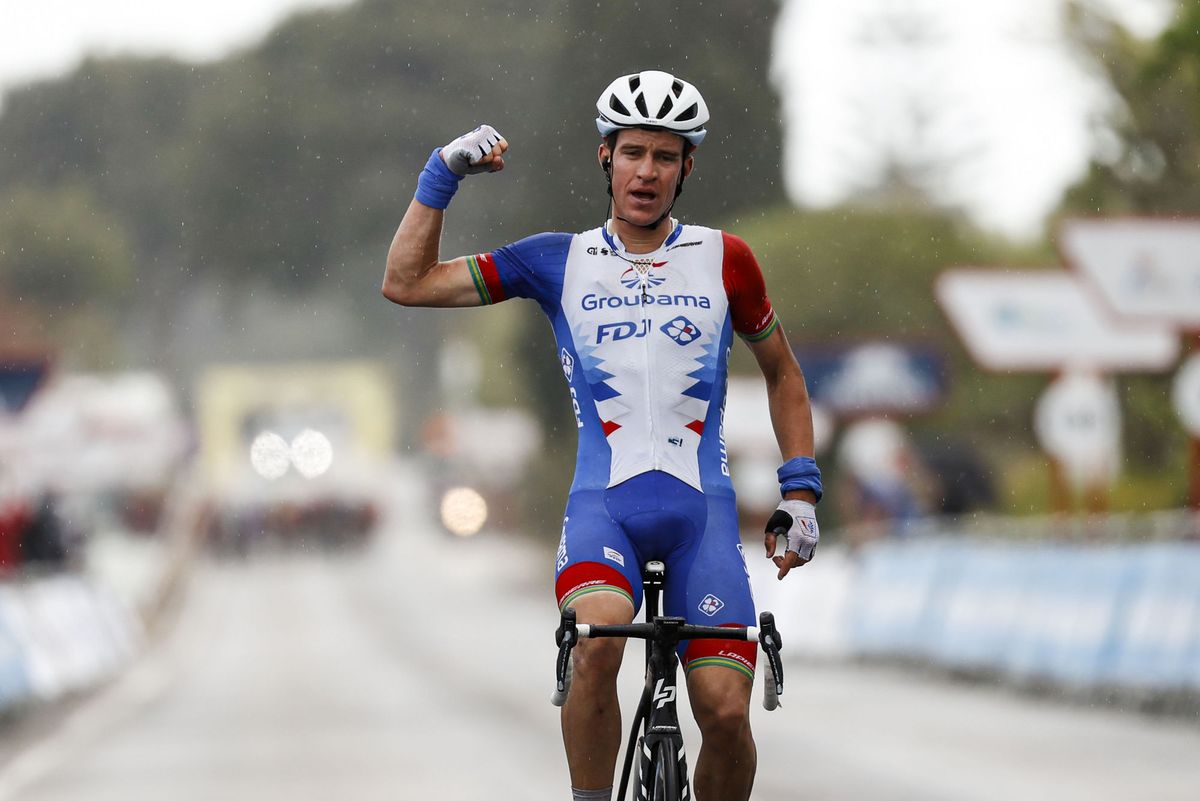 Miles Scotson (Groupama-FDJ) was down to the final kilometres of a long solo attack during stage 1 of the Volta a la Comunitat Valenciana, looking as if he was smoothly sailing toward his first international victory in the professional ranks, and then he crashed on the wet slippery roads.

“With ten kilometers to go, I was pretty sure I was going to win, but I started thinking too much for the overall, taking as many seconds as I could. In the end, I threw away a lot of seconds…,” Scotson said.

At about four kilometres to go the rider went through the mild curves of a large roundabout – steering clear of the white lines but trying to keep every second of his advantage by not braking too much – when all of a sudden the wheels went from under him and he hit the road. Fortunately for the Australian rider, he quickly bounced back, leaping back onto the bike with a tell-tale rip in the side of his shorts. He lost some of his near one-minute buffer though still retained enough to come over the line 28 seconds ahead of the group of around 30 led in by John Degenkolb (Lotto-Soudal).

“It was really slippery today, it probably hadn’t rained here in a while,” he said. “I was happy that the bike was ok and that I could still get the win.”

Scotson, who now also wears the yellow jersey of the race leader at the five day tour, attacked at 22 kilometres to go taking advantage of some hesitancy in the group. There was a pursuit but he was quickly able to take a gap and stretch it on the descent, a move that harked back to the one he made to secure victory at Australian Nationals in 2017.

“I’m super happy,” he said at the finish. “We came here to win a stage with Arnaud [Démare]. I didn’t expect to win one myself, but I had good legs and took the opportunity.”

The 27-year-old rider entered the professional ranks in 2017, with BMC, winning the Australian road title on one of his first outings in the team jersey. He moved to the French team in 2019 and before Wednesday, was yet to take his first international win as a professional. He’s a rider that is usually working for others.

“It’s a great victory for Miles! It’s really nice considering all the work he does all year,” said Démare. “He was able to seize his chance. We know he’s a strong time trialist, we know he’s doing well at the moment, but it’s never easy to pull it off. It’s great that he managed to do it. I’m happy for him”.

Heading into stage 2 of the Spanish 2.Pro ranked tour, the team focus is now on Démare. On stage 3 Scotson and teammate Stefan Küng, who finished seventh on stage 1, will look to their GC position and focus on limiting the losses on the final climb to Dos Aguas. Then, before they reach the finish line in Valencia on the final day, there is also a time-trial on stage 4 which suits Küng, a four-time Swiss champion in the discipline.

“Today I won with a margin, although it is not as big as I would have liked with the crash,” said Scotson, who with time bonuses now has a 32 second lead on GC. “We’ll see if I can hang on in the mountains and then try for the time trial. Anyway, we have plenty of opportunities now.”