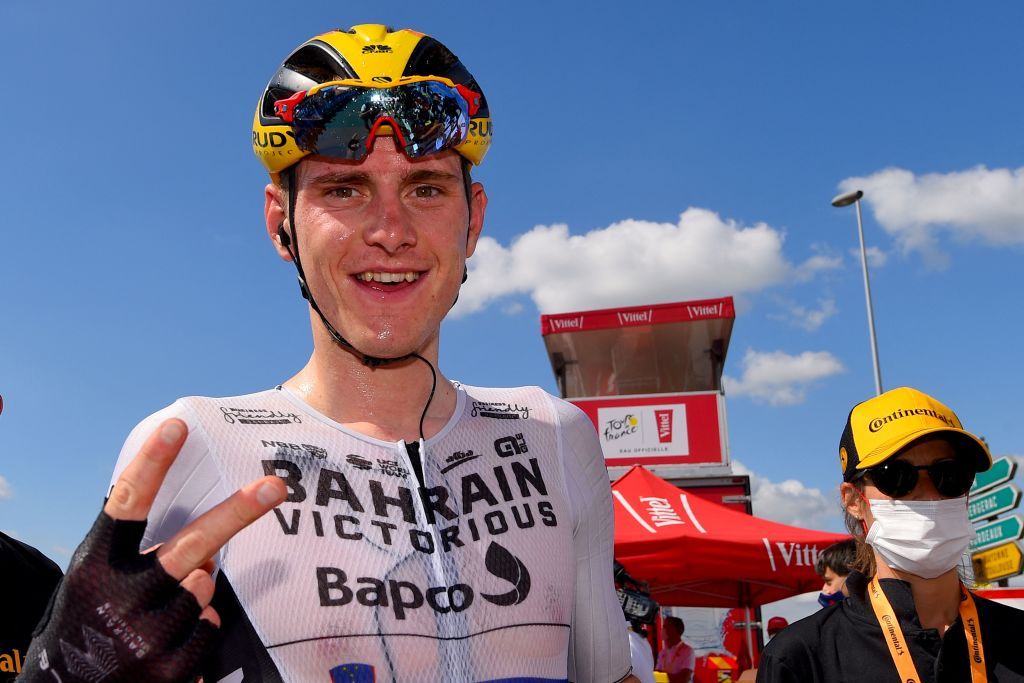 Matej Mohorič (Bahrain Victorious) has joined his compatriots Tadej Pogačar (UAE Team Emirates) and Primož Roglič (Jumbo-Visma) as the latest Slovenian cyclist to launch a campaign to support the development of the sport in his home country. On Thursday, Mohorič presented his new organisation, the Matej Mohorič Foundation, at the Hotel Grof in Vransko to a group of Slovenian cycling officials and journalists.

“This year’s generation of young cyclists in the national team is extremely strong and they have huge potential, so this was also a reason that this year is the right time to establish and start operating the Foundation,” Mohorič said in a team press release.

“I will help with my knowledge, experience and financially, as it is an excellent investment to build a quality and a top program for the young cyclists. I hope that these guys will have about the same opportunity as other national teams in Europe and have an even better starting point.”

The stated goal is to help develop cycling at the junior level by means of coaching, providing equipment to those who cannot afford it, and the broader promotion of cycling as a recreational activity.

While the program is national in focus, Mohorič added that he hoped to also be personally involved with the arrangement of local races.

Mohorič raced with local club KK Kranj (then Sava Kranj) before turning pro with Cannondale in 2014 at the age of 19. With the Slovenian National Team, Mohorič became first the junior and then under-23 men’s road race World Champion in 2012 and 2013, respectively. This past season riding for Bahrain Victorious, he won two stages at the Tour de France and took second overall in the Tour of Poland and Benelux Tour.

“MM foundation will support both Slovenian junior national team and cycling for younger categories on a more local level. The goal is to bring children closer to the sport and create [an] environment in which they can excel,” the Slovenian road race champion said on his Twitter account. “Not all of them will become future champions, but cycling can be a passion and a mean of healthy lifestyle for them for the rest of their lives.”

The Matej Mohorič Foundation will be officially aligned with the cycling governing body of Slovenia, the Slovenian Cycling Association (KZS), and the cooperation was finalised by a letter of intent signed by KZS President Pavel Marđonovič.

“It is a great pleasure for me that Matej will support the Slovenian Cycling Association or more specifically the youth national team. The youth category is significant for the continuation of a career. It is a period that is extremely sensitive to age, potentials are already being shown at this time, and this period is crucial to react at the right time and help young cyclists and guide them properly,” said Marđonovič.

“We currently have 25 youngsters from 6 different clubs in the national team, and they all have the potential to follow Matej’s success. Matej…is ideal and invaluable not only for financial support but also professional and motivational for young boys, professional staff, and liaisons.”

On whether Mohorič’s trade team Team Bahrain Victorious itself had a role to play in the foundation, Mohorič commented to the Slovenian publication Peloton that for now the team was not directly involved but the team was planning toward an U23 team in the future. The prospects of a development squad was also hinted by team Technical Director Vladimir Miholjević in an October interview by ProCycling. As of the time of writing, no official announcement has been made by the team regarding such a project.

Mohorič is not the only high-profile Slovenian to become personally invested in the development of Slovenian cycling. In 2020, Pogačar launched a youth team, Pogi Team Generali, with the help of KD Rog, the parent organisation of Pogačar’s former continental team Ljubljana Gusto Santic. Additionally, Roglič said on Instagram that he too was starting a foundation, the details of which are forthcoming.

Kate Wagner is a Chicago-based writer and critic. Her work on cycling can be found in various publications including Procycling. Her newsletter covers cycling in an unconventional fashion, featuring essays, short stories, multimedia works and illustration.

SOURCE: CyclingNews   (go to source)
AUTHOR: Kate Wagner
All copyrights for this article, including images, are reserved to the original source and/or creator(s).