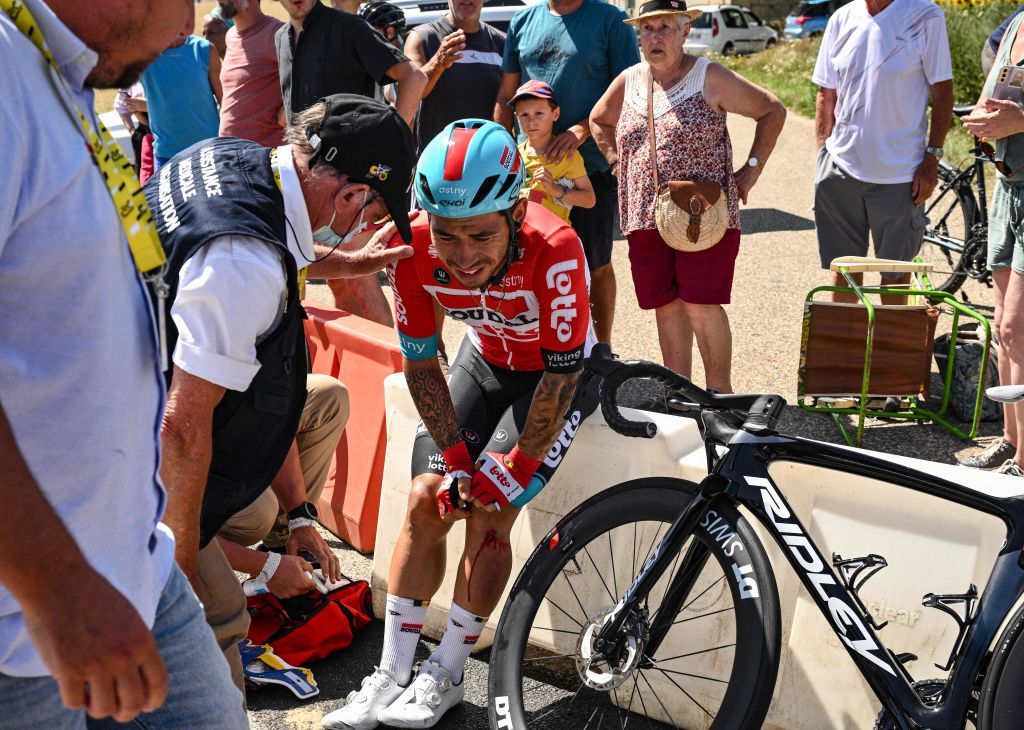 Caleb Ewan’s bad luck appears to have carried over from the Giro d’Italia and into the Tour de France as the Australian crashed on stage 13 and finished in next-to-last place in Saint-Étienne. Lotto Soudal have not confirmed the extent of Ewan’s injuries but the rider has said he has a sore knee and shoulder.

Ewan was a favourite for the stage, but he unexpectedly went down after appearing to have collided with his Lotto Soudal teammates as they led the peloton through a right-hand corner with just over 70km to go in their effort to keep the day’s breakaway at a manageable distance.

“The guys were doing a really good job – the break never got too far ahead, and then yeah, I don’t know what happened. In the corner, they just slammed on the middle of the corner and then I had nowhere to go, so I went into the back to the guy in front of me,” Ewan said of the crash after crossing the finish line 20:05 after stage winner Mads Pedersen (Trek-Segafredo).

Race medics briefly assessed Ewan’s injuries, which appeared to be abrasions on his right arm, knee and leg, as he sat at the side of the road. He remounted his bike and chased to get back into the race, but without the assistance of Lotto Soudal teammates.

He initially rode in the slipstream of a team car as he tried desperately to make his way back to the field. As Alpecin-Deceuninck riders increased the pace at the front of the field, race officials barraged Ewan from gaining assistance from the team vehicles with 65.5km to go.

Ewan eventually caught up to a small group as the race headed toward the day’s key climb, the third-category Côte de Saint-Romain-en-Gal, which was 6.6km at 4.5%, and where the sprinters would need to dig deep for their chance at a sprint in Saint-Étienne.

However, as the road turned up, it spelled the end for Ewan, who eased off the pedals with nothing left in the tank. Dropped from the chase group with 50km to go, he winced in pain but still appeared determined to reach the finish line.

“Once you stay pretty warm, everything feels alright, but I think once I cool down a bit, I’ll start to feel it, but my knee’s pretty sore, my shoulders are pretty sore. I broke my collarbone last year, so it’s fine,” Ewan said.

“Yeah, I think once I went down, I didn’t feel as good anymore, and when I got up, I did a big chase to get back on, then at the start of the climb, I think they were going quite hard. So yeah, I just had nothing left really.”

In May,  Ewan called an end to his 2022 Giro d’Italia, without a victory, leaving before stage 12 in what he described as “the Giro from hell”, but he quickly turned his attention to the Tour de France.

Ewan has previously won five stages at the Tour de France across the 2019 and 2020 editions, but this year his highest place was 13th on stage 2 and 9th on stage 3 during the Grand Départ in Denmark.

He made it through the challenging Alpine stages in hopes of capturing a sprint win at a Tour de France edition that he said offers few opportunities for the sprinters.

“I think, you know, it’s stage 13, and we’ve only had two sprints, so it’s not a great Tour for sprinters,” Ewan said.

“We saw today as an opportunity, and we tried to take it. But it was bad luck, I would say. I definitely don’t think anything’s broken, but you never really know until you’ve cooled down, and probably the next morning, to see where all the niggles are. Now I feel alright, so we’ll see.”