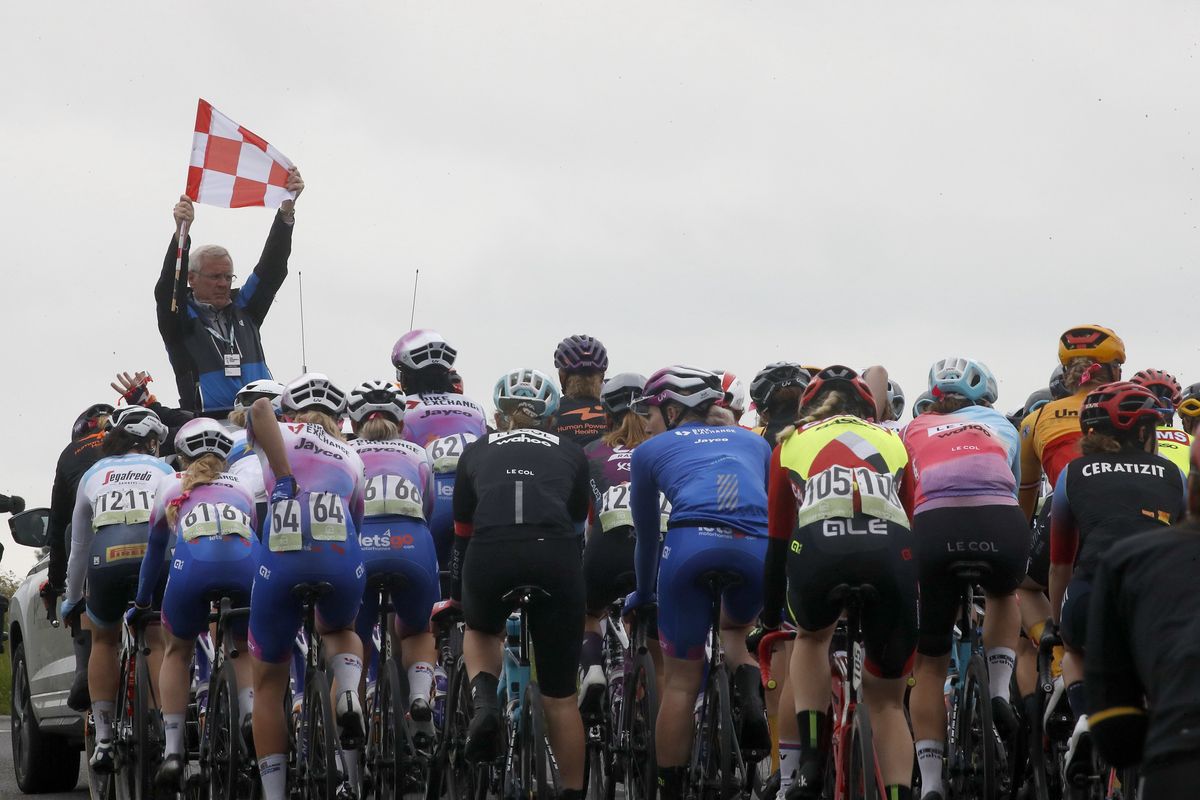 One moment, CAMS-Basso rider Danni Shrosbree was hunkered down in the drops, trying to hold onto her 75-second lead over The Women’s Tour bunch. The next moment, the race director’s car was alongside and she had been told to stop, along with her peers.

So it was, around 35 kilometres from the end of the race’s 142.1km opener between Colchester and Bury St. Edmunds, the leading British WorldTour stage race came to a halt in the middle of the countryside after a serious traffic incident in front of the race.

Shortly after 2:05 p.m. local time, a police motorcycle outrider ahead of the race was in a collision on the B115. To allow for emergency services to attend the incident, the stage was halted for around 55 minutes.

“The motorcyclist sustained a leg and shoulder injury and was taken to hospital for treatment and has since been discharged,” a Women’s Tour spokesperson said afterwards.

It was a novel scenario for the peloton. A few rode up and down the road, while others donned warm jackets and made a beeline for their team cars; Scandinavian squad Team Coop even did the dance for Lizzo’s ‘About Damn Time’ in their kits, trying to stay warm after three hours of racing through intermittent rain on a distinctly un-summery day in Suffolk.

Twenty-five kilometres into her lone breakaway, Shrosbree ate food, put on a puffer jacket and made the most of her team car’s heated seat. “I even had a quick chat with my boyfriend,” she says. “I was really cold when we had to get going again but Dani [Christmas, her CAMS-Basso directeur sportif] got me back in the zone, talking me through how I would get back into the race.”

After a long pause, racing resumed at 3:10 p.m. Despite her best efforts, Shrosbree was pulled back 15 kilometres from the finish.

The bunch were not all in agreement about the end of the neutralisation. Experienced racer Christine Majerus (Team SD Worx) was spotted during the break, deep in discussion with riders from Movistar, Jumbo-Visma and EF Education-TIBCO-SVB.

Speaking to Cycling News at the finish, the Luxembourg champion explained that she was getting their opinions, asking whether they wanted to race.

“I think there should be a rule that if the neutralisation is longer than an hour, you should just stop the race. Because everyone was cold and wet, it’s not the best for the riders,” she said.

During the halt to proceedings, there had also been discussions about the safety of the finale, with Trek-Segafredo directeur sportif Ina-Yoko Teutenberg talking to the jury. “So, some asked to ride just neutralised to the finish and make it safe for everyone, but some other teams wanted to race, so we had to find the middle way,” Majerus said.

“I thought neutralisation was way too long. For me, it would have been a good thing if everyone had stood behind one opinion and also give a sign to the outside [world] that if there are security reasons, we stick together. And we nearly all stuck together; maybe next time.”

Both Majerus and her Team SD Worx directeur sportif Lars Boom said that the finale Bury St Edmunds was adjusted. “They changed it a little bit: because at 800 metres, it went from two roads into one with just a simple cone, no fences, so we were also talking about that with the organisation [at the neutralisation],” Boom said.

It had been agreed that time gaps for the general classification would be taken at three kilometres to go, given the technical finale.

“I think we found a good solution and we could make it a safe finale – which in the end, we didn’t,” Majerus added, alluding to a crash in the last 300 metres which involved several riders, including Lorena Wiebes (Team DSM) and Coryn Rivera (Team Jumbo-Visma).

From a hectic day, Clara Copponi emerged with the first win of her career.

“I thought it would be harder to get going again,” the FDJ Nouvelle Aquitaine Futuroscope rider said of the restart. “But once I was on my bike, it was all right: I just wanted to win today.”

SOURCE: CyclingNews   (go to source)
AUTHOR: Andy McGrath
All copyrights for this article, including images, are reserved to the original source and/or creator(s).